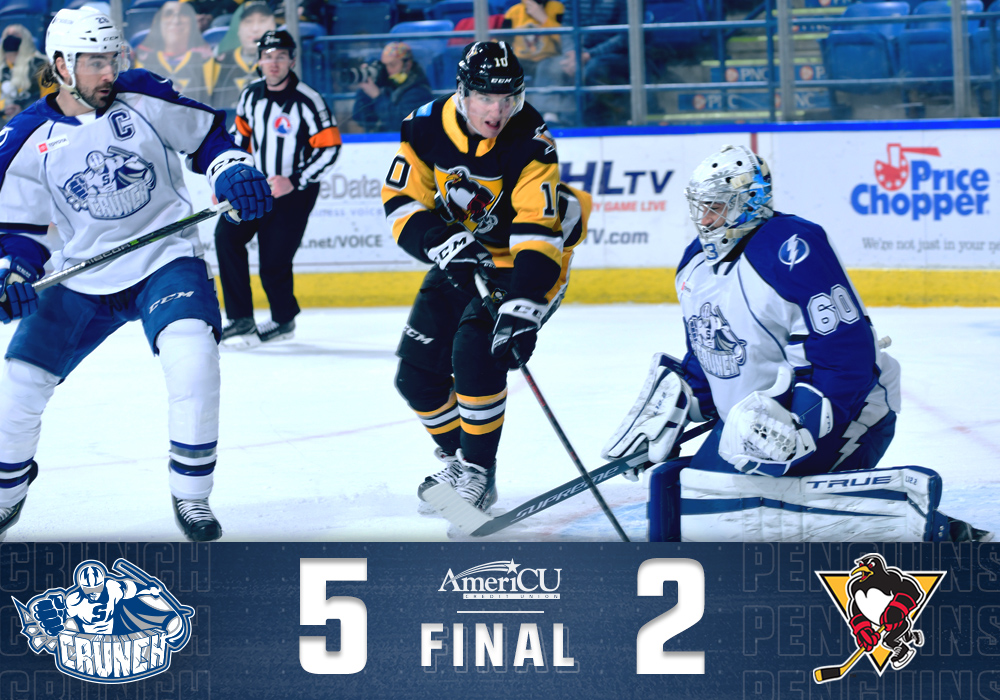 The Crunch built up a four-goal lead off two goals from Sean Day and a tally each from Gabe Fortier and Boris Katchouk before the Penguins stole two back, but Brady Keeper added an empty-netter in the final minute to lock in the Crunch win. Syracuse advances to 5-5-1-0 on the season and 3-1-0-0 in the seven-game season series against Wilkes-Barre/Scranton.

Goaltender Christopher Gibson turned aside 39-of-41 shots in his first game with the Crunch this season. Emil Larmi stopped 8-of-12 in net for the Penguins before being relieved by Shane Starrett in the second period. Starrett went on to stop all eight shots he faced. Syracuse was unable to convert on their one power play opportunity, while Wilkes-Barre/Scranton went 1-for-4.

The Crunch opened scoring 9:06 into the game. After a strong defensive play along the boards, Alex Barre-Boulet forced a turnover and sent the puck ahead to start a breakaway for Fortier. Larmi came out of the net to play the puck, but Fortier won the foot race and scored on the open net. Five minutes later, the Crunch doubled their lead when Serron Noel dropped a pass back for Day to send home.

Syracuse continued the offensive onslaught in the second period. At 3:04, Katchouk went top shelf with a wrister from the right circle. A minute later, Otto Somppi skated through the zone with some quick stickwork and centered the puck for Day to finish off his second of the night and force a goaltender change.

The Penguins finally responded at 6:20 of the second period when Tim Schaller scored from the right face-off dot.

Wilkes-Barre/Scranton stole another one back with a power-play goal at 12:56 of the third period. Pierre-Olivier Joseph fed Drew O’Connor for a one-timer during a 2-on-1 down low.

With less than a minute remaining in the game, Keeper hit the empty net to secure the Crunch victory.

The Crunch are back in action on Wednesday when they travel for a rematch against the Penguins.