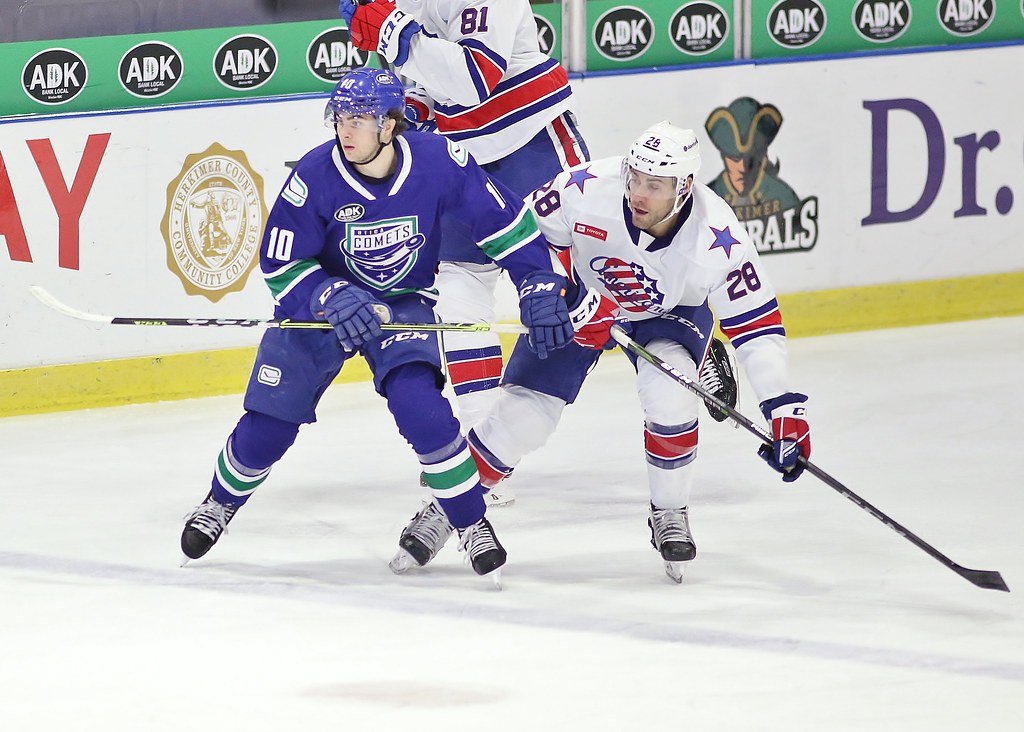 Despite a pair of goals by captain Steven Fogarty, the Rochester Americans (4-2-0-0) were on the wrong side of a 7-2 score against the Utica Comets (4-1-0-1) Friday night at the Adirondack Bank Center.

The matchup was the middle contest of Rochester’s three-game road swing as well as the third of 14 scheduled meetings against the Comets this season. While Rochester saw its four-game win streak come to an end, the club has collected at least one point in 20 of the last 29 games against Utica dating back to the start of the 2017-18 campaign, going 15-9-2-3 over that span.

Along with Fogarty getting on the scoresheet, Michael Mersch, C.J. Smith and Oskari Laaksonen all recorded an assist in the game. The assist gives Mersch helpers in back-to-back games while Smith (2+4) and Laaksonen (0+6) each picked up their sixth points of the season.

Goaltender Ukko-Pekka Luukkonen (3-1-0) took his first loss of the campaign in the crease while making 32 saves. The Finnish netminder has made 30-plus saves in each of his last three appearances.

The Comets offense was fueled by forward Jonah Gadjovich (2+1) and rookie defenseman Jack Rathbone (0+3) as each turned in a three-point outing. Rathbone also made his professional debut along with picking up a game-high three assists. John Stevens (2+0), Sven Baertschi (1+1) and Nolan Stevens (0+2) also recorded multi-point efforts while Josh Teves and Vincent Arseneau rounded out the scoring.

Much like on opening night between the two North Division teams, veteran goaltender Jon Gillies (3-0-1) allowed a pair of goals but still managed the win, his third of the season.

Entering the third period deadlocked at two goals apiece, Utica came out and successfully killed off 19 seconds of a Rochester carryover power-play and did not look back. The Comets rode the early momentum and scored five straight unanswered goals in just over 11 minutes to jump out to a 7-2 advantage.

Captain Steven Fogarty knocks one in on the powerplay to tie the game at one apiece. ?