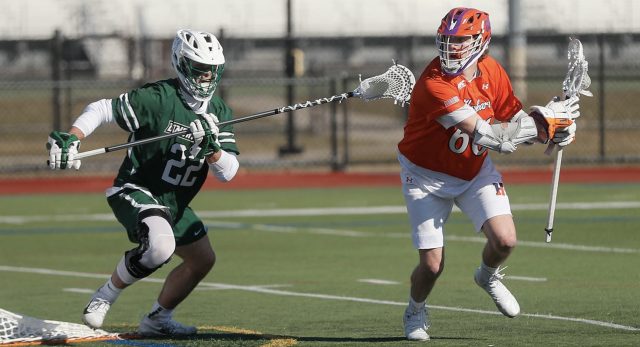 Hobart and William Smith Colleges Associate Vice President and Director of Athletics and Recreation Deb Steward announced today that Hobart lacrosse will return to intercollegiate competition with a 2021 schedule focused on Northeast Conference opponents. HWS and the NEC have developed a return to competition plan that includes testing protocols per the NCAA Sports Science Institute guidance and other COVID-19 travel and game day policies.

“I am proud of our staff and student-athletes,” Steward says. “They have kept their focus on the health of our community while committing to the process of improving themselves as students, athletes and citizens. This has taken a team effort to return to competition and we are thankful for the support from President Joyce Jacobsen and Vice President for Campus Life Robb Flowers.”

Hobart’s eight-game schedule, four at home and four on the road, will include one contest against each of the other seven NEC members as well as an additional game against the Statesmen’s travel partner, Mount St. Mary’s. Hobart’s 119th season is scheduled to begin March 6 on Boswell Field against the Mountaineers. The Statesmen will follow their opener with back-to-back road trips to LIU on March 13 and Mount St. Mary’s on March 20. From there, Hobart will alternate home and away games, hosting Sacred Heart (March 27), Saint Joseph’s (April 10) and Merrimack (April 24) and visiting Bryant (April 3) and Wagner (April 17).

Hobart’s home games will be webcast live on HWSAthletics.com and broadcast live on WEOS-FM (89.5/90.3) in Geneva. All games are subject to change.

With a focus on the health and safety of the student-athletes, spectators will not be permitted at David J Urick Stadium until further notice. All adjacent parking lots will be closed on game days at Boswell Field.

Hobart opened the 2020 season with a 4-1 record and led the nation in scoring when the remainder of the season was canceled due to COVID-19. Head Coach Greg Raymond will begin his eighth season with the Statesmen, welcoming back 42 letter winners, including 16 seniors.

A decision on the other HWS spring sports is expected in early March.