Gambling is no doubt a polarizing activity that is frowned upon by some demographics. However, that doesn’t change the fact that it is an enjoyable pastime for most and that its popularity is continuously rising. Governments seek new tax influxes, and people are on the lookout for novel entertainment. Thus, as worldwide gambling legislation grows laxer, the industry projects the global market should increase by over $200 billion in the next six years.

Casino gambling is glamorous, social, and exciting. So, it should come as no surprise that many New York residents seek it out, and tourists see venues that offer it as an additional allure to visit any region. While the Empire State has never been a gaming hot-bed, particularly when compared to its neighbor New Jersey, it still offers several quality establishments that provide casino games.

Post 9/11, New York legalized Tribal casino-like gaming and allowed slots at racetracks, turning them into racinos. In 2013, the Upstate NY Economic Development Gaming Act got passed, leading to commercial casinos in NY, one of which is in Finger Lakes. Below, we list all the gaming venues in the area and provide information on what you can expect at each one. You can join a USA online casino to practice before visiting, which should equip you with all the know-how necessary to land a win here and there. 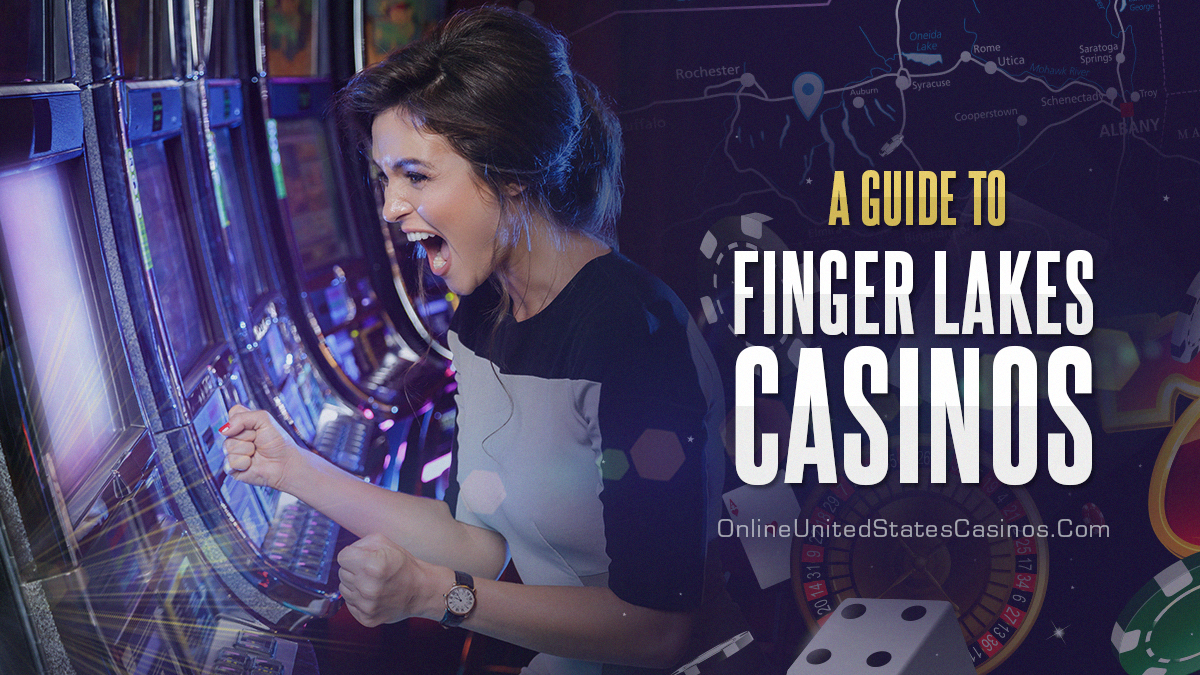 Constructed in 1962, Finger Lakes Gaming & Racetrack is the premium horse racing attraction in the region. Located in Farmington, a 25-mile drive south-east of Rochester, this venue is around one-mile south of Thruway exit 44. Though at first only a racetrack, the site added slots, or as New York state calls them, video lottery terminals (VLTs) in 2004 after a 2003 site expansion and refurbishment. Note that while VLTs may look and act the same as slots, they have a pre-determined number of winners, so you are playing against other players rather than the casino.

The Finger Lakes 1 1/16-mile track hosts thoroughbred racing 160 days out of the year, from April through December, and its list of stakes races include the New York Derby, the New York Breeders’ Futurity, and the Wadsworth Memorial Handicap.

On the gaming side of things, this establishment offers over 1,100 slots, including progressive jackpot machines that payout prizes in the millions., You can find exciting titles such as Dancing Drums, Wheels of Fortune, and Blazing 7s here. It has games for players of any sized bankroll, from penny slots to high-limit cash or ticket in/ticket out machines.

The venue features a smoke-free environment, valet parking, coat check, luxurious seats, complimentary beverages, and more. You can find diverse eateries and live entertainment on-site, and all players must be 18-years-old or older to be on this property, the same as with all NY gaming facilities. If none of the dining options here are to your taste, you can try one of the 63 restaurants within a five-mile drive of the racetrack.

Owned and operated by Peninsula Pacific Entertainment, the Del Lago Resort and Casino is a gaming establishment and hotel that opened in 2017 and cost $440 million. It was one of only three sites to receive a commercial gaming license from the state. Construction started in early 2015, despite protests from the Oneida Indian Nation. You can find it in Tyre, NY, on state route 414.

The Del Lago has 205 luxurious rooms, a boutique, a fitness center, a cedar-wood sauna, an herbal steam room, and spa sanctuaries. It is the only hotel in the Finger Lakes region to receive a AAA Four Diamond designation. Such an award signifies that it meets high amenities, and comfort levels, that provide world-class luxury. It has been named the best casino in the region from multiple publications and has received the TripAdvisor Travelers Choice Award in 2020.

Gaming-wise, it has a 94,000 square-foot floor that is home to close to 2,000 slots and video poker machines and 85 table games. It also has 14 poker rooms, where patrons can enjoy card action such as Seven-Card Stud, Pot Limit Omaha, and naturally, No-Limit Texas Hold’em. In 2019, DraftKings opened a 6,000 square-foot sportsbook on the property, which features 24/7 betting kiosks, and fooderies. The Del Lago rewards regular players with a point system that lets you build-up credits that you can later redeem for things like complimentary valet service, exclusive hotel rates, buffet discounts, and so much more.

The resort’s dining options are the Portico, SmashBurger, Moe’s Southwest Grill, Ciccino’s Pizzeria & Paninoteca, the Farmers Market Buffet, the Sociale, and the Sociale Express. The Del Lago also has its entertainment venue, called The Vine, which can seat 2,400 people. It hosts various comedy acts and bands throughout the year.

We mentioned the Oneida Indian Nation above, a federally recognized tribe of Oneida people with New York headquarters. They got into the casino industry quickly after the Indian Gaming Regulatory Act of 1988 got passed, and in 1993, they opened the Turning Stone Casino & Resort in Verona, NY. In 2015, they launched the Yellow Brick Road Casino in Chittenango, and three years later, they expanded their casino portfolio with the Point Place Casino in Bridgeport.

Construction of this establishment began in July of 2017, and the venue opened on March 1 of 2018. It is a 65,000 smoke-free gaming and dining facility that features 20 classic table games and over 500 slot machines. You can also find electronic versions of Big-Six and Roulette here, and know that the live tables are available past midnight only on Friday and Saturday. The site has a sportsbook named The Lounge with Caesars Sports, which is also available at other Oneida Indian Nation casinos. Here, it boasts a 24-foot high-resolution video-wall, and luxury VIP areas with dedicated screens, which customers can reserve for private viewing parties. The sportsbook is open every day, with a varying schedule.

Point Place offers a TS Rewards Card, which provides exciting benefits for loyalty patrons, such as coupon offers, invitations to members-only events and gaming tournaments, exclusive monthly promotions, and more. It is a standard point-collecting scheme, which helps you earn credits that you can also redeem for resort-wide purchases.

Your on-site dining choices here are Wicked Good Pizza, Burgers of Madison County, and Opals Confectionary. For drinks, you can visit the Fireside Lounge and the Paddle Bar. The latter also is a terrific spot to hear some live music and enjoy some of Upstate New York’s greatest artists.

A Cayuga Nation casino, Lakeside Entertainment is the second Tribal locale in our guide, located on Route 90 in Union Springs. In 2003, the Cayuga Nation purchased a NAPA Auto Parts store, whose building they used to open a bingo hall a year later, which become a gaming establishment that offered Class II games, meaning VLTs. Due to ongoing jurisdiction disputes with the local government, this facility has been closed and reopened several times over its existence. In recent years, the Cayuga Nation has attempted to apply for a license to operate a Class III casino in New York but have been unsuccessful in their efforts.

Lakeside Entertainment is far smaller than the other casinos listed above. It offers only 86 VLTs from Everi Holdings, which provides machines for the New York Lottery, and monitors over 17,000 video terminals in nine facilities throughout the state. In their game catalog, you can find several jackpot games, including a few that offer up progressive prizes. You can view the full list on their website. Electronic bingo is also on hand here, and these machines play a lot like regular slots. A random number generator draws bingo numbers and displays them on reels. There’s a monthly promotions calendar here that treats customers to different free-play vouchers at specific times during each day.

Your only on-site dining option is a snack bar, but there are eleven restaurants within a five-mile radius of Lakeside. Wolffy’s Grill & Marina and Deerhead Lakeside Restaurant are popular choices. The Cayuga Lake State Park is also only four miles away from the facility, and the Frontenac Park is within walking distance.

While the origin of the moniker Finger Lakes remains uncertain, what we can say for sure is that this region boasts some of the best gaming venues in the state. If you have deep pockets, want to get pampered, and a sports fan, the Del Lago Resort & Casino is your obvious choice. If you like nature and only a touch of gambling fun, Lakeside Entertainment is worth considering. Whichever pick you make, be sure to gamble responsibly, and never wager more than you can afford to lose. Remember, if all you want to do is play casino games, table classics, or slots and not socialize, you can also do that online. Modern gambling sites even let you play against live dealers for an authentic casino experience. Make your choice and gamble wisely.

2 mins ago
Social Security provides payments to retired Americans that rely on it each month. In 2022, the average benefit is $1,657 ... MORE

2 hours ago
The state of Idaho is offering a stimulus grocery tax credit worth an average of $100 for residents buying groceries ... MORE

2 hours ago
Indiana residents will soon see a stimulus tax rebate payment worth between $125 and $250 depending on their filing status ... MORE

2 hours ago
Governor Brian Kemp, of Georgia, has recently signed a bill that would pay residents stimulus payments worth up to $500 ... MORE

3 hours ago
Over 43 million people have student loan debt, worth about $1.7 trillion. Repayments for that debt will begin at the ... MORE

Stimulus unemployment benefits need to be paid back to Georgia

3 hours ago
The state of Georgia accidentally overpaid residents stimulus unemployment benefits, and now they want them back. When the pandemic began, ... MORE