The Buffalo Bills are two wins away from returning to the Super Bowl.

Now, no one wants their heart broken by yet another recollection of Buffalo’s four straight Super Bowl losses in the 1990s, so let’s not go there.

The Bills are currently the third choice in Super Bowl betting at odds of +550 and to be frank, their road to the big game almost certainly will require a win over the defending Super Bowl champion Kansas City Chiefs in the AFC Championship Game.

That conjures up memories of the 1966 AFL Championship Game between the same two teams at Buffalo’s War Memorial Stadium, which would determine the first AFL representative to play in the Super Bowl. Buffalo was playing for its third straight AFL title, but Kansas City won going away 31-7, so let’s not go there, either.

Instead, today’s topic is the 1965 Bills – the last championship team from Buffalo. 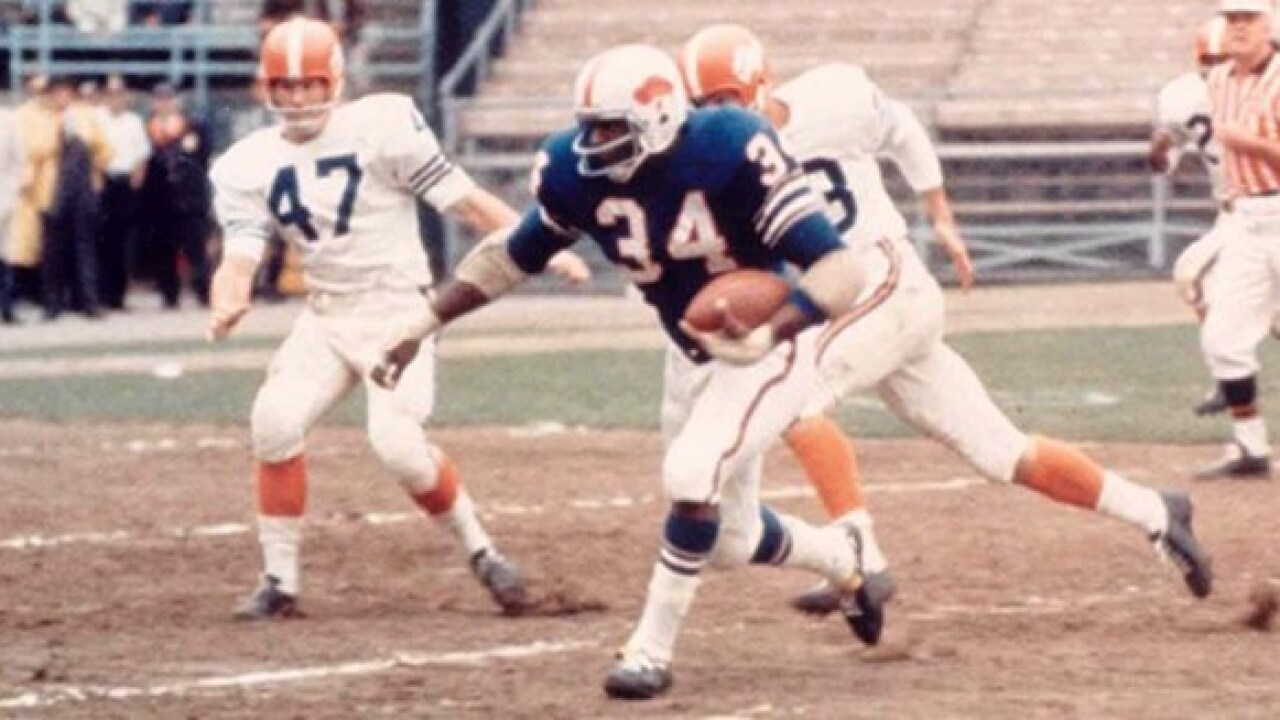 The Bills were a powerhouse club in 1964. Buffalo went 12-2 to capture the AFL East Division crown over the 10-3-1 Boston Patriots.

Buffalo ran a conservative ball-control offense contoured around fullback Cookie Gilchrist. Cookie cut through opposing defenses for a league-leading 981 yards on the ground. His six rushing touchdowns were also tops in the league. Buffalo scored an AFL-best 400 points and rushed for a league-leading 2,040 yards.

Rookie kicker Pete Gogolak accounted for 102 points, booting field goals with a new method known as soccer style. Buffalo’s defense was the stingiest against the run in the AFL.

The defending champion San Diego Chargers would provide opposition in the AFL title game. Buffalo won both regular-season meetings with the Chargers by 30-3 and 27-24 counts.

The day didn’t start out to be promising for the Bills. The Chargers took the opening kickoff and embarked on an 80-yard drive to gain a 7-0 lead. Two Gogolak field goals and a Wray Carlton TD run sent Buffalo into the half ahead 13-7.

The only score of the second half was a quarterback sneak TD by Buffalo’s Jack Kemp.

The Bills defense put the clamps on the Chargers. The game is remembered for what was known as the hit heard around the world. A crushing tackle by Bills linebacker Mike Stratton forced a fumble from Chargers running back Keith Lincoln and left Lincoln done for the day with a broken rib.

Gilchrist ran for 122 yards and Buffalo posted a 20-7 verdict for the city’s first AFL title.

A long-standing feud between Gilchrist and Bills coach Lou Saban resulted in the Bills trading Gilchrist to the Denver Broncos for full back Billy Joe on Feb. 24, 1965.

Minus their most productive player, thoughts of another championship weren’t in the forefront of the minds of most Bills fans. Things grew more dire when injuries deprived the club of starting wide receivers Elbert Dubenion and Glenn Bass.

Nonetheless, Buffalo opened the season 4-0 before suffering a 34-3 whipping at home against San Diego. The two clubs met again in San Diego on Thanksgiving and fought to a 20-20 tie.

Despite a pedestrian offense, Buffalo relied on the instep of Gogolak and a stout defense to go 10-3-1 and win a weak East Division by five games.

Still, the Bills headed to San Diego for a rematch in the title game as 6.5-point underdogs. There was plenty of motivation among the Buffalo players, though. Kemp and linebacker Paul Maguire were among five former Chargers on the Bills roster who’d been cut by San Diego coach Sid Gillman.

The day would be dominated by Buffalo.

Kemp threw a TD pass to tight end Ernie Warlick and Butch Byrd returned a punt to the house to gain the Bills a 14-0 halftime advantage. Gogolak kicked three second-half field goals and the Bills defense never allowed the Chargers to get inside the Buffalo 24-yard line during a 23-0 victory.

With the berth of the Super Bowl, the game marked the last time an AFL Championship Game would conclude the season. It also was the most recent title earned by the Bills.

Buffalo has been waiting patiently for another crown ever since.