SNOWFALL BY THE NUMBERS: A look at totals across Upstate New York (full coverage)

The winter weather alerts issued by the National Weather Service have expired. While parts of the region saw pretty significant snowfall — the epicenter of the nor’easter was in the Binghamton-area, which saw some incredible snowfall totals.

It wasn’t the biggest snow storm the Finger Lakes or Western New York has seen, but snowfall totals were impressive in the Southern Tier, and even Central New York. 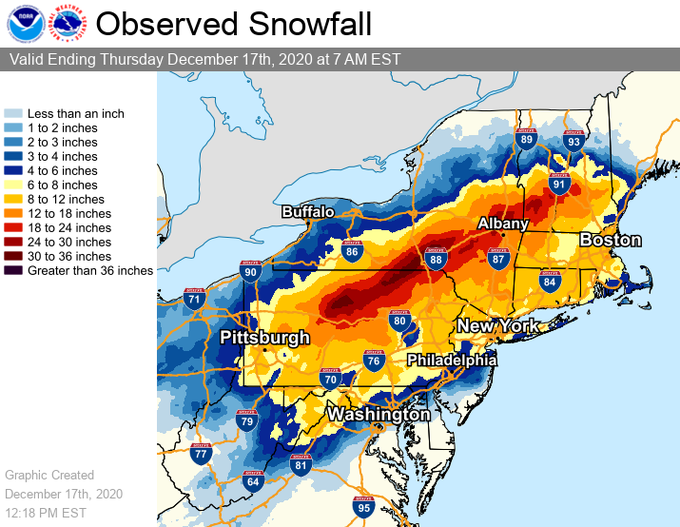 Thank you to all those who have provided us with snowfall reports. If you have time, check out some of the impressive snowfall totals coming out of Binghamton, NY! Our complete list of snowfall can be found here : https://t.co/TZtLkLm5Se#NYwx pic.twitter.com/vAjbYLsEw7

One of our forecasters doesn't want to think about digging out her car later, and instead captured a very nice video of the heavy snow falling on us here at NWS Binghamton. #nywx #pawx pic.twitter.com/uwAH47hYvH

Reporting in. Letting up. About another 1.5 inches making it 10inches here 7:15am. #Keukalake #fingerlakes #Yatesflakes pic.twitter.com/kVxFSKrb9C

Check out this impressive snowfall that took place in/around Binghamton, New York where over 40 inches of snow fell and at points during the storm it was snowing 4-6 inches AN HOUR! #NYwx pic.twitter.com/YHyMDkxpnZ

Snow totals have topped 40 inches in Binghamton and Endicott! New York and Pennsylvania have both reported over 3 feet so far this morning with snow still falling. #NYwx pic.twitter.com/siT9nzD7PC