The Seneca County Industrial Development Agency was well-represented at Tuesday’s Board of Supervisors’ Government Operations Committee Meeting, which was held at the County Office Building.

Executive Director Sarah Davis, who came into that role this year, was present along with two other representatives to answer questions about the former Hillside Campus in Romulus. The property, which is owned by the IDA and part of a proposed sale involving Earl Martin, had previously been leased to Hillside until their closure in 2019.

Martin was the only bidder on the 172-acre property, which includes a number of vacated buildings. His proposal was for $65,000, which drew criticisms from some board members after an independent appraisal of the property showed that it was worth $350,000. The selling price, which was approved by an IDA vote on August 7th was also significantly lower than the property assessment, which is under dispute at $3.8 million.

A request for proposals had been publicized by the IDA in the spring, but due to the Coronavirus Pandemic, viewing of the property was reduced to ‘window tours’ during the bid and sale process. Davis defended the process, noting that the RFP was publicized on June 10th, which was accompanied by a press release to local media. Responses were due by July 17th. 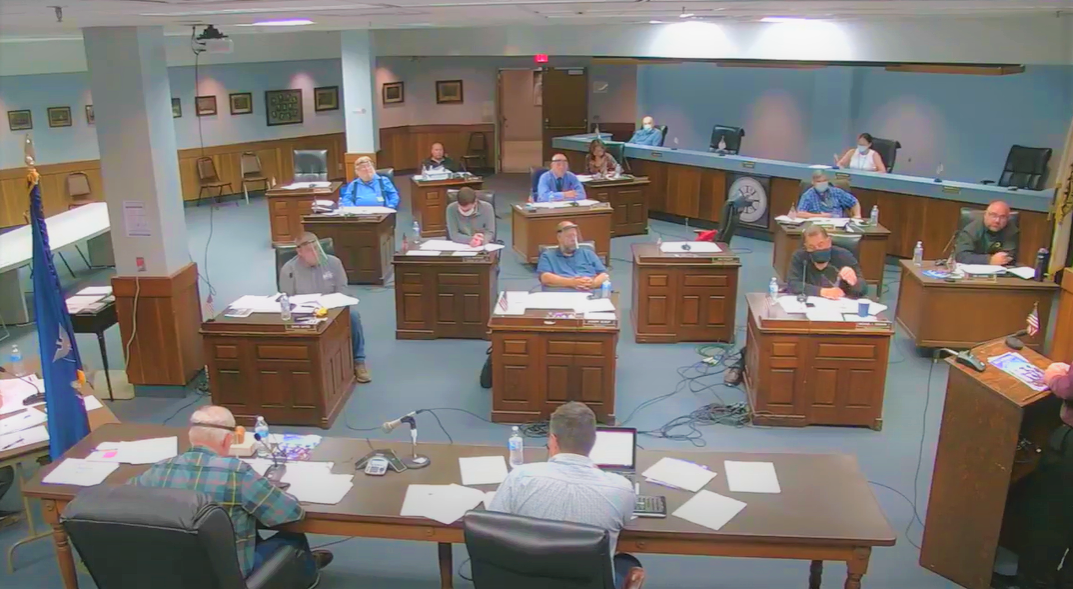 Supervisor Mike Ferrara, R-Seneca Falls, was first to pose a question to Davis, as he inquired about any discussion connected to extending the RFP process. “Was there any discussion by the IDA to put it out – another RFP – since there was only one taker?” Ferrara asked. Davis responded, noting that there was interest from one other party — an individual from New York City. “Turns out, the timeline for what he was looking for was much longer,” she responded, adding that the IDA has ‘substantial expense’ in maintaining operation of the property.

Since taking over the property from Hillside in April, Davis said that the IDA had accumulated more than $98,000 in expenses associated with maintenance and utilities.

Supervisor Cindy Lorenzetti, D-Fayette, was next to enter the debate inquiring about the sale price. Davis said that timing of the property appraisal created a situation whereby the IDA did not have that information when the RFP was out. In fact, she noted in a response to the Board that the appraisal was received just two days before the IDA voted to approve Martin’s purchase offer of $65,000.

“The IDA is not legally obligated to sell the property at market value,” Davis explained. “The appraisal was done because we needed to have one done to give our 90 day notice of the sale, and help us with the grievance process for the assessment. Our goal was to make the property more marketable to a potential buyer.”

What is required is a letter to the state, who has governing authority over any sale of property from the IDA to a private buyer. The state has 90 days from the time the letter is received to approve or deny the deal.

“I’ve had many phone calls and comments from the public about this sale,” Supervisor Lorenzetti continued. Martin already owns a large portion of the former Seneca Army Depot, of which the former Hillside Campus is part. While the sale is not yet final, Davis noted that the purchase price had been paid up-front by Martin, and a lease agreement had been reached to ensure that the IDA no longer paid maintenance or utility costs associated with the property.

Caption: Part of the Hillside Campus on the 170+ acre property.

As far as contingencies on the sale are concerned, Davis said that Martin could potentially seek a PILOT agreement until a ‘mutually agreeable’ assessment was defined between the local assessor’s office and himself. She noted that discussions have come up on the topic among IDA board members, but no official application for financial assistance had been received to date.

As for Martin’s plan at the site, it’s not entirely clear. And documents obtained last week show that the IDA may not have had full-knowledge of Martin’s plan for the property when it agreed to sell for $65,000.

Before the committee session concluded, Supervisor Lorenzetti called for the Board to consider sending a letter to New York State about the proposed deal. The goal of said letter would be to stymie the sale temporarily, and potentially initiate a resale process where another RFP process could be launched. However, with one absence the Committee failed to get enough support on the motion, which died on a 2-2 draw. Supervisors Mike Ferrara and Ernie Brownell voted against it. While Supervisors Lorenzetti and Kyle Barnhart voted for it to go to the full-board for consideration.

No immediate action was expected on the matter after the committee debate. Davis said that the sale is expected to be completed in the coming months, but no exact timeline has been solidified.