Housekeeper speaks out about Ontario Center, as concerns raised about COVID response were ignored

It wasn’t a bad April Fool’s joke. There’s nothing funny about it.

Kelsea Flynn, a former housekeeper at Ontario Center for Rehabilitation and Healthcare has come forward after recently walking-out on her former employer after witnessing the horrors of the nursing home and long-term care facility and its abuses amid their handling of the COVID-19 pandemic.

On April 1st, Flynn emailed her supervisor, Sheri Zufelt, the housekeeper supervisor stating that she would no longer work at Ontario Center.

In her candid message to Zufelt, who allegedly contracted COVID-19 herself, she expressed disappointment with management at the rehab center, claiming that the pandemic is “not being taken seriously through the administration among other higher up staff.”

The email outlines several serious health-related concerns, alleging that the rooms of COVID-19 positive residents are left open and certified nurse assistants are possibly contaminating the spread of the virus among multiple floors.

Flynn felt that she and other staff’s input were not valued or even remotely considered, which led to her writing that her opinions were “shrugged off” while management suggested that “everything is fine and people are over reacting.”

“But all it would have taken to keep your workers is acknowledging and letting us know where we are. Maybe ask suggestions about how to best approach this. Not sending people who have sore throats and even slight and even slight temperatures at the desk to go up and work,” she continued. 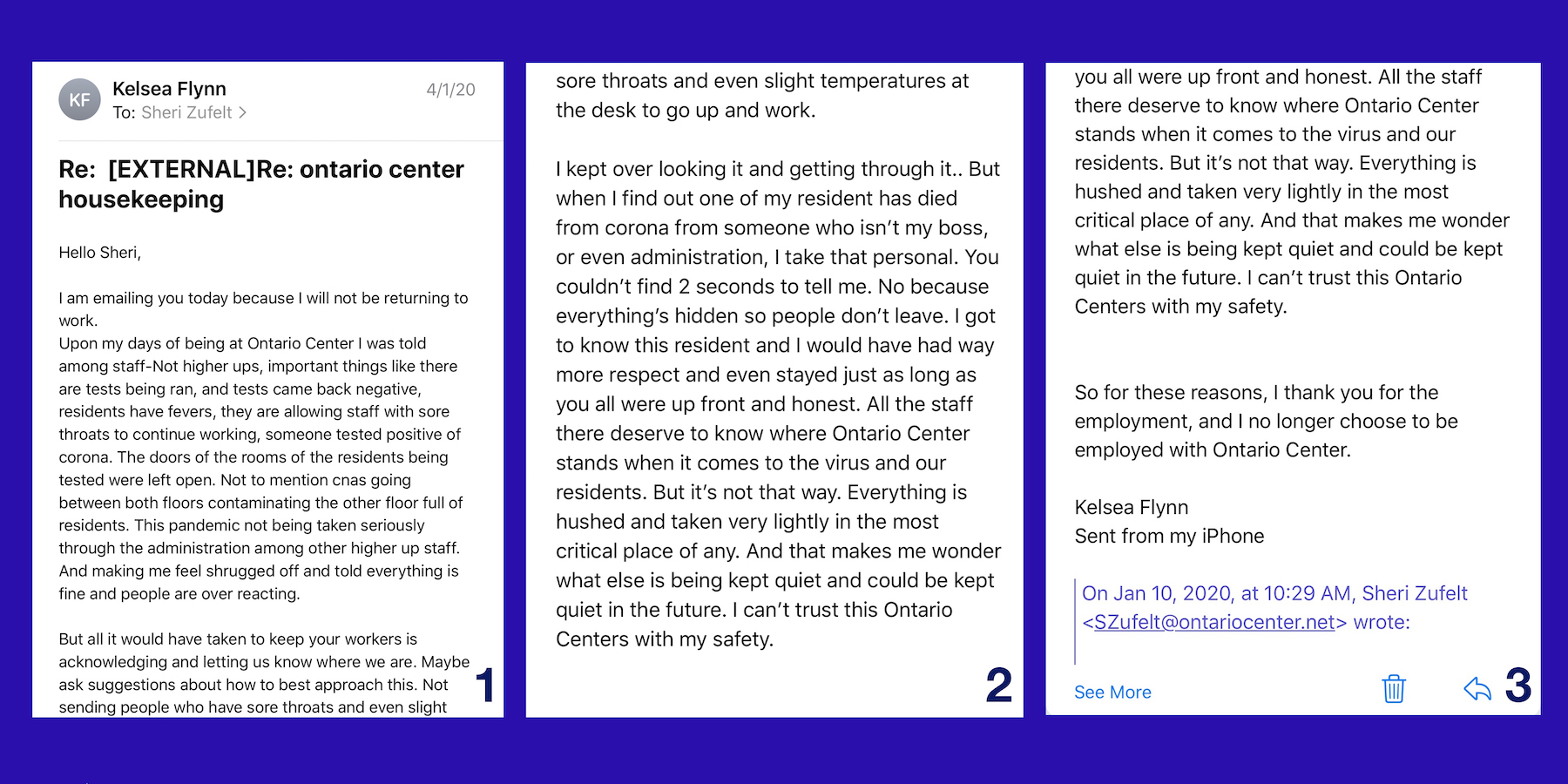 Shortly later in the email, Flynn alleges that one of her own residents passed away from COVID-19, but she wasn’t informed about it, stating that she did not find out until later – and not from her boss or the administration itself.

Rather, she obtained this information indirectly through a second-hand source, explaining that she took it personally.

“I take that personal. You couldn’t find 2 seconds to tell me. No because everything’s hidden so people don’t leave. I got to know this resident and I would have had way more respect and even stayed just as long as you were up front and honest,” Flynn wrote.

Flynn insisted that all staff regardless of occupation and department had an inherent right to clearly understand the ongoing situation at Ontario Center.

“All the staff there deserve to know where Ontario Center stands when it comes to the virus and our residents,” she stated.

Instead, she firmly believes that this is not occurring at Ontario Center.

“But it’s not that way. Everything is hushed and taken very lightly in the most critical place of any. And that makes me wonder what else is being kept quiet and could be kept quiet in the future,” Flynn emphasized.

All things considered; Flynn came to the harsh conclusion that she simply could not trust Ontario Center with her own personal safety as an employed housekeeper in good standing.

“I can’t trust this Ontario Centers with my safety,” Flynn said.

But instead of the previous resignation of Bill “Beard” Corino, a full-time employee who split his hours between serving as a maintenance worker as well as the sole driver at the facility and the forceful termination of Connie Helker, a front desk receptionist and housekeeper herself – Flynn decided to formally walk-out on the company.

RELATED READ: Ontario Center employee had to develop his own COVID safety protocols as pandemic ripped through facility

“So for these reasons, I thank you for the employment, and I no longer choose to be employed with Ontario Center,” Flynn concluded.

A few days prior to sending her email, Helker contracted COVID-19, becoming the first employee at Ontario Center to test positive for the illness – after leaving her post on March 30th.

Following Flynn’s email, Zufelt has since not responded back to her initial correspondence.