On Wednesday the Geneva City Council engaged in spirited debate of several issues in a 4.5 hour marathon session. 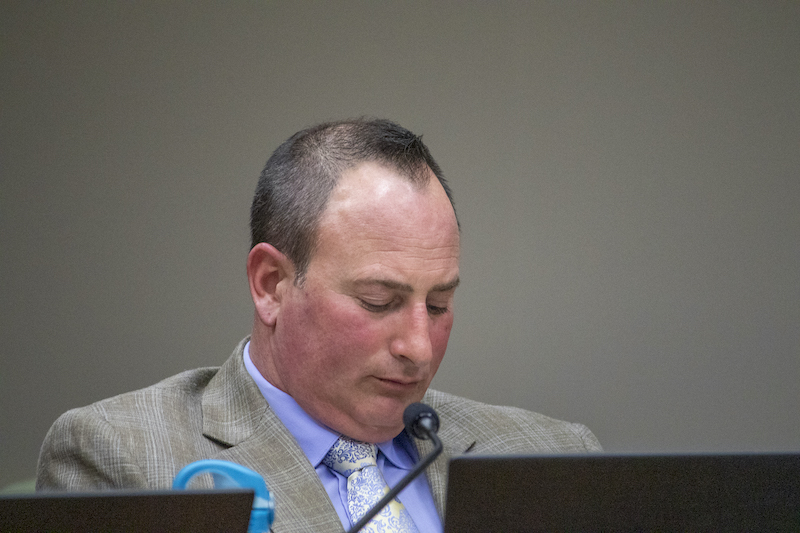 The most hotly debated topic of the evening was a proposal by Councilmember Frank Gaglianese III (At-Large) to consolidate positions at the Department of Public Works. Gaglianese proposed consolidating functions by asking the Director of Public Works to shift some duties, such as sidewalk inspections, to lower level employees while taking on other higher-level functions such as engineering responsibilities for public works projects instead of contracting out this work. Gaglianese argued that the department is not operating as efficiently as it can be, and that the City could save money by not filling the position of an employee who is scheduled to retire.

The issue raised considerable debate. Mayor Steve Valentino spoke of how organized the department was and of the many functions it performed, while Councilmember R. Ken Camera (Ward 4) said that he would like to see a comparison of the City’s costs if the department provided services with in-house employees versus if they provided services through a contracting model. Tempers flared when Councilmember Anthony Noone (At-Large) attempted to speak in support of Department of Public Works staff, praising the hard work they put in and stating that the Department is actually understaffed. Gaglianese interrupted Noone several times. Mayor Valetino raised his voice, repeatedly telling Gaglianese that he could not interrupt because he didn’t like what was being said. Valentino also reminded Gaglinanese of the rules of order that prohibit Councilmembers from interrupting one another.

While the debate was spirited and at times heated, ultimately the Council took no action on Gaglianese’s proposal.

Virtually all Councilmembers were concerned about the prospect of routinely releasing these deed restrictions because they were put in place to encourage home ownership. Mayor Velntino said that having owner-occupied property improves neighborhood vitality and creates stronger neighborhoods. The Council voted unanimously to reject the resolution to remove the deed restriction for the property at 166 Lewis Street, but made clear that the bank or property owner could come back to the Council with a new request if they had additional information justifying the request. The Council tabled the resolution regarding the deed restriction on 97 Hillcrest Avenue to allow the potential purchaser to work with City staff to address the Council’s desire that the property remain owner-occupied for 5 years from the purchase date.

The discussion regarding the deed restriction resolutions also led into a larger discussion on how the City should handle property issues. Councilmember Tom Burrall (Ward 1) expressed concern that he was aware of an offer that was made on a property owned by the City, but that the offer information had never been provided to the Council. Burrall was frustrated that City staff rejected the offer without consulting with the Council. Staff indicated that they rejected the offer only because there wasn’t a process in place for how to process such offers and that was why they had asked for the issue of how to handle property sales to be placed on the Council’s agenda. Burrall countered that staff should not have unilaterally rejected the offer, but should have told the person making the offer that it would be brought to the Council’s attention. Ultimately, the Council and staff agreed that any subsequent offers on real estate would be brought to the Council and that they would continue to work towards a more streamlined process for handling real estate issues that ensured that everyone would be aware of the process and of all transactions in the future.

Councilmember John Pruett (Ward 6) presented two proposals that proved controversial. The first proposal called on the Council to pursue withdrawing from the current sales tax agreement with Ontario County and increasing the City of Geneva sales tax by 0.5% to 8%. Pruett argued that this proposal would allow the City to keep sales tax revenue in the City to benefit City residents and would ultimately result in increased revenue. Others were concerned that the proposal would discourage people from shopping in the City and would have a negative impact on the lower-income portion of Geneva’s population. However, Pruett pointed out that many other jurisdictions already had an 8% sales tax.

The second proposal called for the Council to work towards developing an ordinance freezing the amount of tax-exempt property in the City at no more than 60% so that 40% of property in the city will always remained on the tax roll as non-exempt. Mayor Valentino pointed out that State Law prohibits the City from limiting exemptions for non-profit organizations, and Councilmember Camera stated that a better approach would be to focus adding property to the tax roll through growth.

Despite the varying opinions on the issues, the Council felt that the resolutions were inappropriate because they merely called on the Council to work on these issues, which could be done without resolutions. Consequently, the Council rejected both resolutions with only Pruett voting in favor of them.

In other action, the Council voted to establish a second monthly meeting to be held the first Monday of each month. This meeting will be a working session where no actions will be voted on. Mayor Valentino said that the meetings would be open to the public but would not be televised due to cost concerns.

The Council also approved a resolution opposing the development of a sewer sludge composting facility in Butler New York, which will result in truckloads of sludge being transported through Geneva. During the public comment portion of the meeting several residents spoke in opposition to the sludge composting facility, particularly in light of the issues Geneva already faced with smells from the Ontario County landfill.

The Council also approved a resolution for a signage variance at 41 Lakefront Drive, and approved the second reading of an ordinance that will change parking restrictions on Worthington Avenue.

The Council also made the following appointments:

Board of Ethics:  Steven Lee, Victor Nelson, and Rebecca Czajkowski, with Nathan Miller as an alternate.

Board of Assessment Review:  Tammy Luzzi, and Tamarie Cataldo with Debra Wright as an alternate.