Several deeds show that the Cayuga Nation purchased multiple parcels of land on Route 89 and Garden St. Extension in several deals spanning from 2003 to 2009, where the Cayuga Nation Police Department recently destroyed 12 buildings.

These properties in Seneca Falls, known as fee lands are taxable entities and privately owned by the Cayuga Nation. It means that these parcels fall under the jurisdiction of New York State law, and not tribal law immunities.

The five parcels are listed under the Seneca County tax rolls, including the operational main office of the Cayuga Nation. 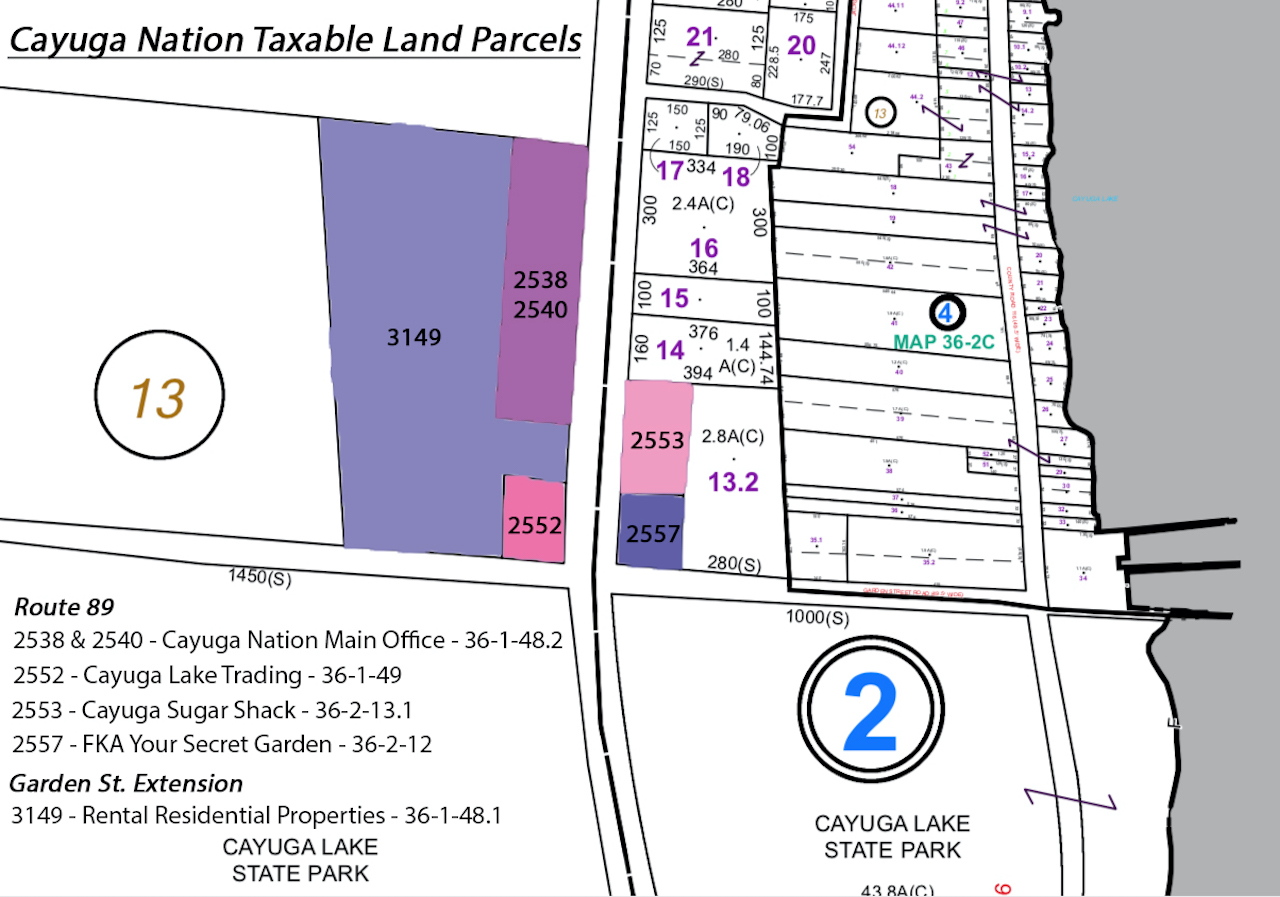 On Route 89, the four parcels are all taxable, each with different use designations.

One pair of parceled properties, 2538 and 2540 consist of a parking lot and the Cayuga Nation’s main office, which encompasses 2.9 acres. Following demolition, it remains the only building left standing on the span of properties.

Cayuga Lake Trading, or the gas station and convenience store, was located at 2552 on Route 89. It was another taxable piece of land with only 0.69 acres on-site until the Cayuga Nation Police demolished the building.

Formerly known as Your Secret Garden, the restaurant property located at 2557 is also owned by the Cayuga Nation.

The restaurant building, spanning 0.6 acres is also a tax contributing property in Seneca Falls, which was sold by Brookes Lake Breeze, LLC for $160,000 on December 18th, 2008.

Amid the initial carnage when demolition began 3149 Garden St. Extension was utterly decimated.

Stretching across an expansive five-acres of land, Halftown rented cabin properties to members of the Cayuga Nation, specifically housing the families of the Unity Council.

This camping park deal was also conducted by Riegel and an associate, which sold in a joint package with the 2538 & 2540 parcels on Route 89. It meant the Cayuga Nation purchased the separate properties for $650,000 on that exact same day back in 2005.

Fee lands can then be transferred to become lands that are held in trust by the U.S. federal government, but this process is lengthy and requires those properties’ taxes to be fully-paid.

Under the guidance of Halftown, the Cayuga Nation has already applied to transition certain fee land into trust through the Bureau of Indian Affairs, but until this request has been signed, the local and state law enforcement supersedes tribal jurisdiction.

This legal position, which has been backed in multiple cases that stipulate this argument, has also seen support from Gabriel Galanda, the managing lawyer of Galanda Broadman, an Indigenous law firm that specializes in regulatory disputes for tribal governments, enterprises and citizens.

With this in mind, the violent melee that transpired after this Saturday’s press conference raises questions for legal experts on how the Cayuga Nation Police handled the situation, especially in the case of Charles Bowman, a Fayette resident and non-Indian who was unlawfully detained by authorities.

Characterizing it as kidnapping and after suffering from numerous injuries, Bowman has already consulted legal counsel and spoken with the DA office to press charges as the legitimacy and criminal authority of Halftown’s Cayuga Nation Police uncertainly wanes in the balance based on whether the land in question is either fee or trust.

As previously reported, FingerLakes1.com confirmed that the five parcels of land where the demolition and post-press conference brawl transpired are fee lands and currently not held in trust by the U.S. federal government.

Seneca County Attorney David Ettman pointed to two court rulings, with implications locally. “As I mentioned, the more recent ruling City of Sherrill, N.Y. v. Oneida Indian Nation of New York, 544 U.S. 197 (2005), and the 2 local related cases, Seneca-Cayuga Tribe of Oklahoma v. Town of Aurelius, N.Y., 233 F.R.D. 278 (2006) and Cayuga Indian Nation of New York v. Village of Union Springs, 390 F.Supp.2d 203 (2005) highlights the difference between ‘original tribal lands’ and what we are dealing with today,” he explained. “The Sherrill decision essentially limits the ‘sovereign rights’ of the Indian nation unless and until the ‘land in trust’ process is complete.”

He says that concept is ‘clear’ in the decisions in Aurelius and Union Springs, which provide for local control on zoning laws and regulations. “The point to be made is that CIN does not have full and complete sovereign rights over the lands that they purchased over the past 25 or 30 years,” Ettman added.

As for land ownership and deeds, Donna Silversmith of the Cayuga Snipe Clan spoke on behalf of the subject from the traditionalist perspective at Saturday’s press conference that was held by the seven condoled chiefs.

Silversmith explained that the traditional Cayuga Nation leadership does not believe in possessing deeds to confirm entitlements to use land, which stems as another ideological dispute that has splintered views between the nation’s traditional leadership and BIA federally recognized Halftown.

“As traditional people we don’t need deeds to tell us that we own the land. We already know. We own that land. We don’t need Clint Halftown to say I got this deed and I own this land,” Silversmith said.

From the early-2000s until present day hundreds of properties have been purchased by the Cayuga Nation, which was confirmed by the Seneca County Clerk’s Office.

There were 12 properties on five parcels of land, each of which contributed to the interconnected Cayuga Nation community. Those properties have been destroyed. Except for the main office of the Cayuga Nation. Since that Saturday, when demolition began, permits have been obtained to resume demolition on two of the properties. That permission has not been granted yet to the other parcels due to a local law adopted in 2006, which prevents work permits from being issued on properties that owe back taxes.

17 mins ago
The Ithaca Police Department reports the arrest of a 50-year-old following an incident at the McDonald’s restaurant on Elmira Road ... MORE

20 mins ago
The Ontario County Sheriff’s Office says it’s investigating a fatal motorcycle crash that happened on State Route 96 in the ... MORE