Sophomore attackman Jason Knox scored a record-breaking 10 goals as Hobart College defeated Siena College 26-9 in the Thomas B. Poole ’61 and Family Sports Dome this afternoon. Knox, who broke the program’s Division I goals in a game record with nine last season at Siena, eclipsed his own mark as well as the Northeast Conference record for goals in a game. 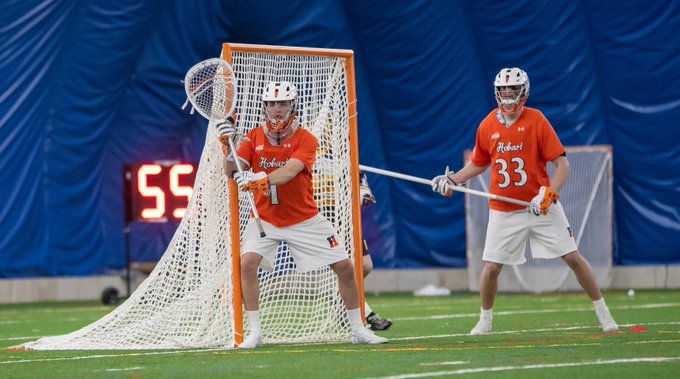 Knox scored at least once in each quarter, including a five-goal outburst in the second quarter. It’s the most goals in a game by a Statesman since John Topichak ’71 scored the program’s overall record, 14, in a win at Brockport on May 21, 1969. Knox also added an assist to finish the day with 11 points, the most by a Statesman since Chris Aslanian ’19 had 13 points (6g 7a) against Wagner in 2017.

RECORD GOAL! Jason Knox with his 10th of the day. Breaks the Hobart D1 record for most goals in a game. pic.twitter.com/fzapqzc5Eb