“I really want to thank all of you for being here and all of you for your support”, Gajan, who was named a member of the Finger Lakes All Star Lacrosse team in 2019, said after the signing in the NHS library.

Having been recruited by two other colleges _ Edinboro University and Clarkson University _ Gajan, whose current GPA at NHS is 85, and hopes someday to become a physical therapist, is very excited about her decision to attend Mercyhurst.

“These past 4 years have truly been the best. I love my team and my coaches here in Newark and my Club Lacrosse team, Relentless Hustle Renegades,” she said. “I’ve been playing lacrosse since third grade and club lacrosse since 6th grade. I am so thankful for all the support I’ve gotten during the seasons I’ve played in Newark and traveling for my elite team. I’m excited to be recruited to play at Mercyhurst University and I’m looking forward to making more memories during the upcoming season with my Newark teammates and new memories as a Laker and following my dreams to become a physical therapist.”

“Grace Gajan is an excellent lacrosse player who does as well on the turf as in the classroom. She is an example of what we want our younger athletes to be: hard working, dedicated, reliable . . . and talented doesn’t hurt either. She is a multi-sport athlete, closing out her soccer career this past fall, helping lead our team to their first league title since 1991. Grace is heading into her fourth year on the varsity lacrosse team, starting each year, and being a leader on both ends of the field. We are so proud of her earning the opportunity to play collegiate lacrosse at Mercyhurst.”

Karen Cline, NHS health teacher who is the lead Varsity Girls Lacrosse is thrilled for Gajan.

“It’s awesome,’’ she said. “It’s her dream. It’s what she played high school and club sports for to go on to play on a collegiate level. She’s a great player.”

“I’ve known Grace since she started playing in third grade _ this is exciting,’’ she said.

Gajan’s Mom and Dad are very proud of their daughter’s accomplishments.

“I am so proud of Grace and I’m happy she has this amazing opportunity,” Catherine Gajan said. “She is a fearless and determined young lady. I have no doubt Grace will be successful at Mercyhurst University, both academically and on the lacrosse field as a Laker. She is a fantastic athlete and I have loved watching her grow into the kind, thoughtful, caring and lovely person she is today.”

“As Grace’s Dad, I couldn’t be more proud of her accomplishments in the classroom and on the athletic field,” he said. “Her acceptance to Mercyhurst and signing the National Letter of Intent to play Women’s Lacrosse for them will be an exciting next chapter in Grace’s future. She is a bright, confident, and beautiful young lady. I’m sure she will achieve great success at Mercyhurst.” 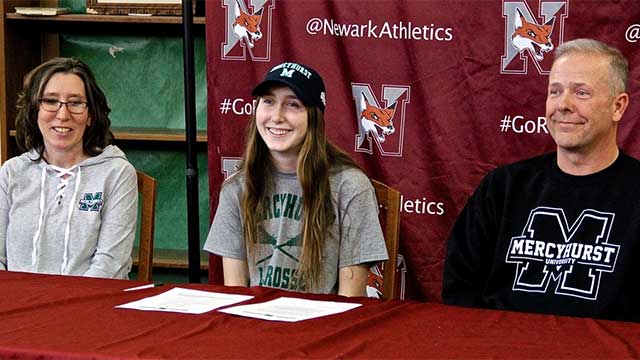 In addition to lacrosse, Gajan has also played soccer since she was in the Kitz program in Kindergarten right up through this year. She played basketball beginning in second grade through her junior year at NHS.

Gajan’s extracurricular activities include being a member of NHS Link Crew, St. Michael’s Church and the VFW Post 2883 Auxiliary and helps with their activities. She volunteers at athletic sports camps during off seasons for both basketball and lacrosse; is a fierce advocate for persons with disabilities and has worked at the Apple Shed since 2017.  NHS Principal Tom Roote commended Gajan for not only being a great athlete, but also a good student.

“Grace is an exemplary student athlete,” he said. “It is the highest compliment I can offer when I share that her effort on the field is matched in the classroom. Way to go Grace!”

“I’m so proud of Grace and her accomplishments and I wish her all the best in the next phase of her journey.”

39 mins ago
The march to sectional glory continues on for student athletes and their schools across Section V and the Wayne-Finger Lakes ... MORE