Big changes could be coming to one downtown street with a challenged reputation.

On Thursday, Canandaigua City Council considered a resolution to create a task force to evaluate the possibility of moving forward with revitalization of the Phoenix Street area often referred to as “Blood Alley”.  Phoenix Street between Main  and Lafayette gained the nickname “Blood Alley” because it was once a location for brawls, drugs, and many other crimes. Phoenix Street property owner Mike Yarger says that residents of the area have been working hard for years to revitalize the area. Yarger feels that the City can now help the area move forward even more by investing in economic development in the area.

The resolution was proposed because there is a desire to close Phoenix Street to traffic and convert it into a pedestrian walkway. It is believed that such a project would help attract additional visitors to shop, dine, and explore in downtown Canandaigua. However, the City has never been able to develop any funding to move forward with the idea. Councilmember Stephen Uebbing (At-Large) envisions the task force as a means to look at all possible alternatives for continuing the revitalization of the Phoenix Street area.

After discussion the Council approved the resolution. Mayor Bob Palumbo appointed the task force’s first three members, David Whitcomb, Mike Yarger, and Dan Unrath. Whitcomb will be the Chairman of the task force. Palumbo hopes that the task force can develop a plan that will allow the City to start by closing off traffic and turning Phoenix Street into a pedestrian walkway for special events several weekends this Summer. Palumbo said this is a test to see if it would be beneficial to designate part of Phoenix Street as a pedestrian walkway permanently.

The Council considered two changes to the Municipal Code.

The first proposed change was to Chapter 648 of the Vehicle and Traffic Code to eliminate an existing stop sign on Sand Street at the intersection of Telyea Street. The change was proposed because Sand Street was recently changed to a one-way street. So, the stop sign at Sand Street and Telyea Street is not necessary because traffic can no longer travel in that direction.

The original resolution called for the Sand Street stop sign to be removed immediately. Councilmember Karen White (Ward 3) proposed amending the resolution so that the change would not take effect for 30 days. After discussion, the Council approved the amendment. The Council also approved eliminating the stop sign at Sand Street and Telyea Street. 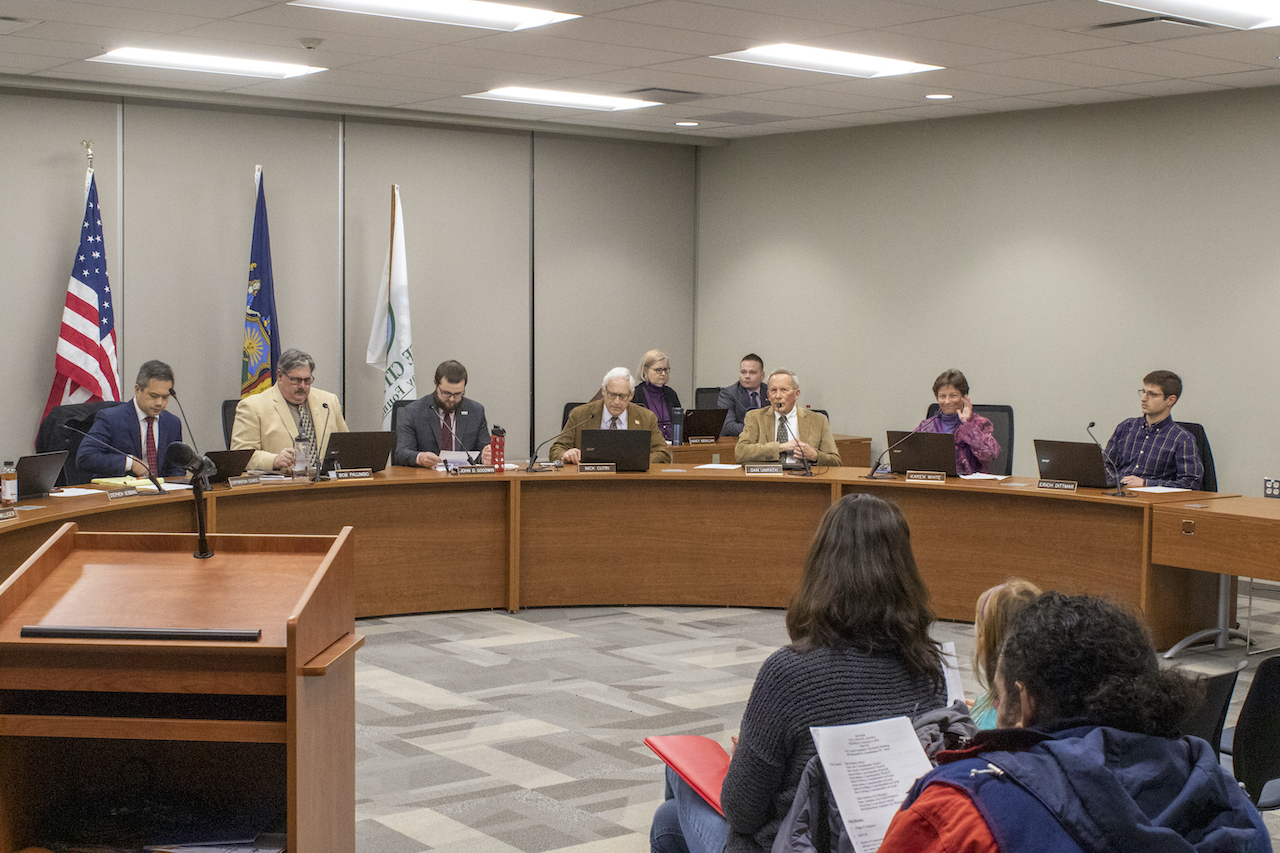 From Thursday’s session as Canandaigua City Council met for their second meeting of the year. Photo by Todd Elzey.

The second Municipal Code amendment considered amending Chapter 714-28(A). This amendment would require a permit to operate a parking garage in the City. The amendment was proposed to ensure that Chapter 714-28(A) remains consistent with 19 NYCRR 1203.3, which was recently amended by the New York Secretary of State’s Office. The amendment was tabled because a Public Hearing is required before the Council can approve the proposed changes. The Council approved the scheduling of a Public Hearing on amending Municipal Code Chapter 714-28(A) to be held on Thursday March 5, 2020 at 7:00 p.m. The hearing will be held at the City Council Chambers located at 205 Saltonstall Street, Canandaigua, New York.

The Council also authorized two events to occur in the City. First, the Council approved an application from the Downtown Canandaigua Business Management Association to host an evening parade and festival style event as part of the USSA EQS Eastern Freestyle Ski Championships. The parade and festival honoring participating skiers will be held March 20, 2020. The ski event is being held March 20-22, 2020 at Bristol Mountain. The event is scheduled to feature 250 of the top youth skiers in the Northeastern United States and Canada. According to event organizers, some past participants have gone on to compete in the Winter Olympics. The proposed parade will run along the South Main Street sidewalk from West Street to Commons Park. The festival honoring participating skiers will be held at Commons Park from 4:00 p.m. to 8:00 p.m.

The Council also approved an application from Abbie Sullivan to hold a race and family event known as the “Canandaigua Mile” on May 2, 2020. The new event is a one-mile run/walk that will begin at the corner of Buffalo and Main Streets and end at Commons Park. Race organizers hope to use the event to bring the community and local businesses together.

A resolution honoring long-time city employee Peter Houle was presented and approved by the Council. Houle recently retired from 28 years of employment as a Water Treatment Plant Operator for the City of Canandaigua. The resolution recognized and thanked Houle for his many years of dedicated service to City residents.

During the public comment portion of the meeting, local property owner Mike Yarger told the Council that many residents remain concerned about the City’s policy of charging residents an $80 per hour fee for removing snow and ice from sidewalks if residents fail to do so within 24 hours of a snowfall. Yarger said he was particularly concerned over the program because residents are charged $80 whether the snow removal takes only 5 minutes or the full hour. He indicated that he had located a contractor who would be willing to undertake the same service for $40 per hour. Although the Council took no action on this issue, the Council did discuss the potential for revisiting the snow removal fee issue at a future meeting.

In other business: the Council reauthorized partnerships with Habitat for Humanity of Ontario County and PathStone Corporation for programs to assist low-income home owners with home repairs, authorized continuation of a contract with Erina Hose Company #1 for volunteer fire fighting services, awarded a contract for overhead door maintenance services, reauthorized a lease agreement with Gateway Grille for use of dumpsters located on Mill Street, authorized budget amendments to permit purchase of a new cloth covering for the salt storage facility and to continue the Lake Friendly Lawn Care Program, and authorized the Climate Smart Canandaigua Task Force to collect a fee from vendors signing-up to participate in an upcoming Green Vendor Fair.

Todd covers local government in the Finger Lakes. He has a JD degree the Lincoln Law School of Sacramento. Send tips to todd@fingerlakes1.com.