Bill Roege, who recently took over as HABs Director for Seneca Lake Pure Waters Association, says the last seven days have proven to be busy for volunteers working around Seneca Lake to identify harmful algal blooms. 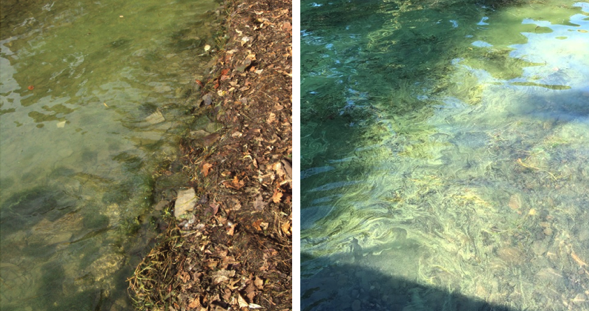 Last week, Frank DiOrio was a guest on FingerLakes1.com’s Sunday Conversation, outlining some of the things that SLPWA had seen throughout the season.

The findings were significant.

“Just when we think we have a handle on how the cyanobacteria behave on Seneca Lake, we get surprised,” Roege wrote in an update published on Thursday. “This week our volunteers continued to be alert and it paid off by finding very (to me) unexpected blooms.”

He says that while blooms can appear anytime, seeing them in early- or mid-October on Seneca Lake is unusual. In fact, it’s something that they haven’t seen in five years, according to Roege.

“Tuesday and Wednesday this week were sunny and calm. The water temperature is still warm enough, so poof!…both days we found blooms in the Northeast, Northwest and Southwest quadrants,” Roege wrote in Thursday’s update. “Some were very intense looking.”

There were eight reports of blooms on Tuesday; and six reports on Wednesday. Of those 14 reports – eight samples were taken for lab testing, but he says that two of Tuesday’s samples already returned positively.

Then, Geneva officials warned residents about an algal bloom, which was observed near the Finger Lakes Welcome Center.

“There is algal bloom swatch from the concrete steps in front of the Welcome Center to the pier by Castle Creek at the lakefront. Please use caution from the boat launch to the boardwalk. Signs are being put up soon at this location,” City Officials said. “Please report symptoms that may be associated with exposure to blue-green algae blooms, such as skin or eye irritation, or diarrhea and vomiting to the Department of Health.”

As DiOrio said in his appearance on the Sunday Conversation Podcast, sampling and watching the middle of the lake is a challenge. Roege says that this will be a focus area for 2020.

He says that residents and visitors should be mindful of what’s happening on the lake.