At least 135 public water systems across the state are contaminated with cancer-causing chemicals known as PFAS at levels above recommended thresholds for mandatory cleanup, according to state water sampling data.

And more than four times that many — 645 facilities, the state Department of Health estimates — will need to spend an average of $1.325 million each on upgrades if the Cuomo Administration adopts the thresholds and makes them enforceable as expected by late next year.

But hundreds of thousands of people who currently drink PFAS-tainted tap water from those compromised sources are in the dark about the health dangers because state officials aren’t sharing their sampling data with the public.

“We don’t want to repeat Hoosick Falls over and over again,” she added. “Any data they have should be publicly available.”

PFAS is a class of man-made chemicals used in a wide range of  non-stick household products, including Teflon and Scotchgard. The have also been key ingredients in foams used to fight petroleum fires.

Even when they make up only a few parts per trillion in drinking water, PFAS (per- and polyfluoroalkyl) chemicals have been linked to kidney and testicular cancer and a host of other maladies. They are very common, they do not break down naturally, and they accumulate in the body. An emerging nationwide health threat, they remain largely unregulated.

In response to the Hoosick Falls crisis, the EPA reduced its federal health advisory level for a combination of PFOA and PFO (two of the most common variants of the chemical class) from 400 parts per trillion to 70 ppt. But the advisory is not legally enforceable.

After taking heat for their slow response to Hoosick Falls, state officials are poised to take a far more aggressive step.

In December, a Drinking Water Quality Council appointed by Gov. Andrew Cuomo recommended setting a legally-enforceable state maximum contamination level (MCL) of 10 parts per trillion each for PFOA and PFOS.

Paul J. Granger, a member of that panel, told a webinaraudience on April 30 that he expected the Health Department to adopt that MCL standard by the end of 2020.

“I’d be very surprised if the Health Commissioner (Dr. Howard A. Zucker) or the Public Health Planning Council makes any changes with regard to the (10 ppt MCL) recommendation,” said Granger, superintendent of the Port Washington Water District. “But time will tell.” 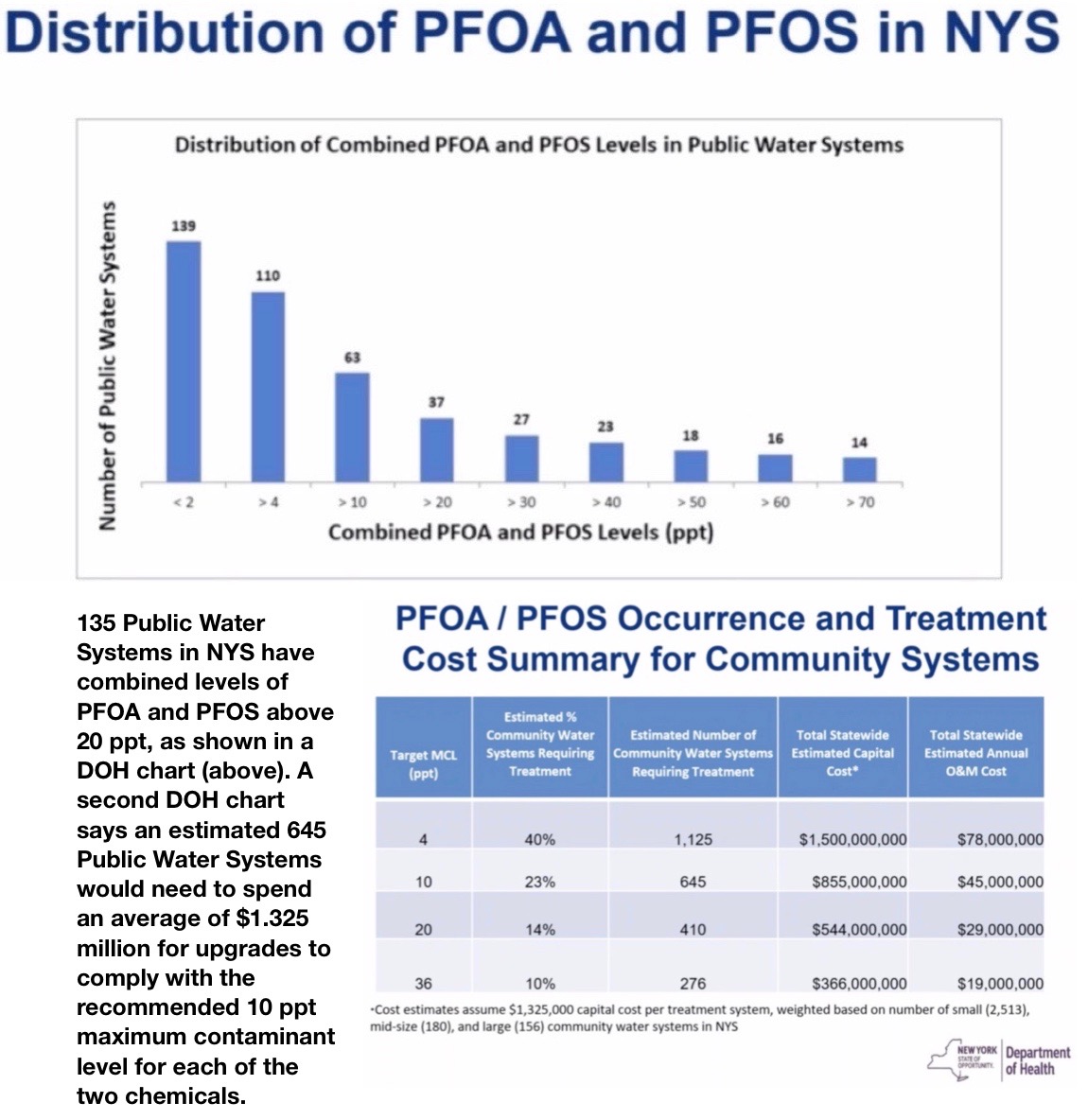 In settling on its 10 ppt MCL recommendation, the council used DOH estimates to weigh its financial impact.

The agency projected that 645 community water systems — 23 percent of the 2,849 statewide total — would need to spend a combined $855 million on upgrades to meet the 10 ppt threshold. Granulated activated carbon filtration systems are the preferred effective remedy, but they are costly.

The smallest water system might get by spending as little as $200,000, but larger systems might face bills of $15 million or more, DOH said. (Hoosick Falls fell in the middle at $2-3 million).

Operating and maintenance costs for the hundreds of new systems will run an estimated $45 million each year, DOH said.

Water ratepayers will need to pick up whatever portion of the tab that can’t be covered by either state grants or payments from from polluters shown to have caused the contamination.

Granger said a proposed regulation setting the MCL at 10 ppt is expected to be published by the end of this year. After a 60-day comment period, the proposal may be revised or adopted by the DOH.

“Once an MCL is adopted, all public water supply systems of any size would need to test their water within certain time frames to comply,” Granger added.

He urged water system operators not to wait for a draft regulation before starting testing. “If you have not tested your PFAS compounds, do it now,” he said. “It’s like your own personal health. You need to know your blood pressure, your cholesterol, things like that.”

DOH officials already know about “detections” of elevated PFAS at dozens of sites, Deputy Health Commissioner Brad Hutton said the the water council’s meeting in December. But they’re not sharing that information with the public.

The sites for the state tests were selected from the hundreds of facilities that acknowledged to the state Department of Environmental Conservation that they had stored or used products containing PFAS. That long list was trimmed by picking out the sites that were next to sources of public drinking water.

The DEC acknowledged in April that it had conducted sampling for PFAS at 140 sites, but it declined to provide a list of them to WaterFront. A Freedom of Information Law request for them is pending.

The DOH did not acknowledge WaterFront’s May 6 request for a list of the 135 PFAS-tainted sites it referred to in the graphic shown to the council in December. Nor did a DOH spokeswoman respond in April to WaterFront’s emailed questions about PFAS.

That information logjam may not be broken until the DOH finally approves the recommended MCLs and local sites are required to do their own testing, said Moran of NYPIRG.

“It is imperative that the DOH act quickly,” Moran said. “The longer it takes to establish limits, the longer communities will be in the dark and the longer people may be getting exposed.”

However, state officials may be inclined to drag the process out for political reasons, Moran added, because they’re in no hurry to deal with the sticker shock facing public water systems.

Throughout much of 2014 and 2015, Hickey had pressed state and local officials to act on evidence he had uncovered of PFAS contamination of his community’s public drinking water.

He had been motivated to search for possible water contamination after his father, a long-time employee at the local Saint-Gomain Performance Plastics plant, died of kidney cancer in 2013.

“I saw my dad go through a really crappy illness,” Hickey said. “He was cheated.”

Since Hickey understood that Saint-Gobain was involved in the manufacture of non-stick products, he began with a Google search for “Teflon” and “cancer.” That yielded hits for “PFOA.” (Saint-Gobain operates other facilities in Albion, Amherst, Granville, Niagara Falls and Poestenkill.)

Weeks later he stumbled across the conclusions of a three-member panel of epidemiologists charged with investigating the PFOA-related health impacts of a Dupont chemical plant in Parkersburg, West Virginia.

The panel, chosen jointly by parties in a lawsuit over the plant’s emissions, found a “probable link” between PFOA and kidney cancer.

In 2014 Hickey took Hoosick Falls water samples to the Canadian lab that the epidemiologists had used. It found highly elevated PFOA.

Over the following year, the Cuomo Administration kept a lid on the problem until a December 2015 newspaper article in The Albany Times-Union about Hickey data ignited a furor and mobilized the EPA.

Over the following few months, Gov. Cuomo responded with a series of high-profile actions addressing PFOA and PFOS, including putting Hoosick Falls on the state’s Superfund list. The governor also created the drinking water quality council and charged it with setting MCL limits for the two chemicals.

After the council made its recommendations in December, state officials touted New York for seeking the strictest standards in the country.

But the recommendations mean little until they are adopted and actually enforced, Hickey cautioned. And the timeline for that can easily be extended.

“They do just enough to stay off the radar, out of the news,” Hickey said.

The same might said for the EPA, which has softened its stance on PFAS under the Trump Administration.

In March, at a Congressional subcommittee he chaired, Rep. Harley Rouda (D-Ohio) expressed frustration in his opening remarks:

“Last month the EPA issued a PFAS action plan announcing that the agency would consider … consider … regulating PFAS chemicals with no indication of when the process might actually be completed.”

Rouda also bristled at the Department of Defense’s position that the EPA must now take the lead in regulating PFAS, which have been detected a high levels at hundreds of military bases across the country (including the former Seneca Army Depot in Romulus).

“It is unclear why the DOD feels justified in passing the buck to the EPA … particularly in light of evidence suggesting DOD’s awareness of the toxicity of PFAS since the early 1980s.”

But the co-chair of the Congressional PFAS Task Force, Rep. Brian Fitzpatrick (R-Penn.), countered, saying: “There is a very real risk associated with over-regulating these chemicals.”

Setting MCLs that are lower than necessary exposes municipal water authorities to “cost-prohibitive compliance requirements” that would ultimately be borne by water customers, “many of whom were never exposed to any health risks from PFAS,” he added.

Meanwhile, in the absence of firm data or guidance from either the EPA or the state, local officials are left on their own to decide whether to order their own tests for PFAS chemicals in their water systems.

One of those officials, Montour Falls Mayor John King, said the DEC had conducted PFAS tests on his town’s system in 2018. But it hasn’t yet shared the results.

He has reason for concern because the New York State Academy of Fire Science, a training facility that has acknowledged storing PFOA-laced fire-fighting foam, is located near wells the town uses for its water supply.

While the town hasn’t heard from the DEC on the issue, it did receive a letter April 3 from the law firm of Kennedy & Madonna, which has been pursuing legal claims against companies that may be responsible for PFAS contamination.

The firm sent a similar letter to many other Finger Lakes municipalities.