Gov. Andrew Cuomo arrived in Geneva in July 2016 with some big news.

The city was one of 10 communities around the state to receive $10 million in the first year of his Downtown Revitalization Initiative, a plan to invest state money — and generate private investment — to encourage more development in central business districts around New York. 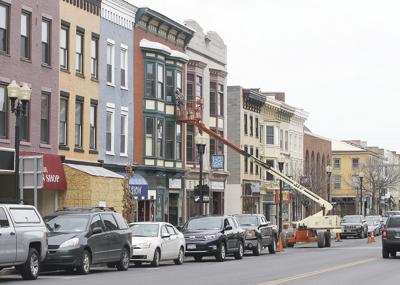 Nearly three years after that announcement, Geneva residents may be wondering what is happening with many of the funded projects, which range from street work to private building improvements.

The answer, said City Manager Sage Gerling, is a lot.

For private development getting DRI funding, the progress can be seen throughout downtown. For the public infrastructure projects getting DRI funds — such as the Routes 5&20 road-calming and downtown connectivity project — the city is edging closer to final designs, she said.

It’s unlikely you’ll see any road and sidewalk projects taking off this year.

“(Routes) 5&20 will most likely be the first (project to start),” Gerling said. “We’re going out to bid (on the projects) as one package.”

That bidding will happen this year.

Gerling said Barton & Loguidice, the firm chosen to handle the design for Routes 5&20, the five-points intersection improvements and streetscape work on Castle and Exchange streets, is continuing to develop final designs, with plenty of input from city residents and staff.

Geneva Business Improvement District Executive Director Mark Palmieri likes the mix of infrastructure and building improvements that are funded under the $10 million in DRI funds.

“I think of this as a two-pronged approach,” he said. “The streetscape addressing traffic and pedestrian flow and building and façade improvements. Combined, the ultimate goal is an enhanced, welcoming environment with lots of commerce. We want the downtown to be a vibrant, economic center, with a variety of retail stores, along with the restaurants. It will be friendly for vehicles, pedestrians and bikers. A Streetscape Committee, along with lots of opportunity for community involvement and input, are bringing great suggestions.”

The biggest of the infrastructure projects is the Routes 5&20 work between Elizabeth Blackwell and Lake streets.