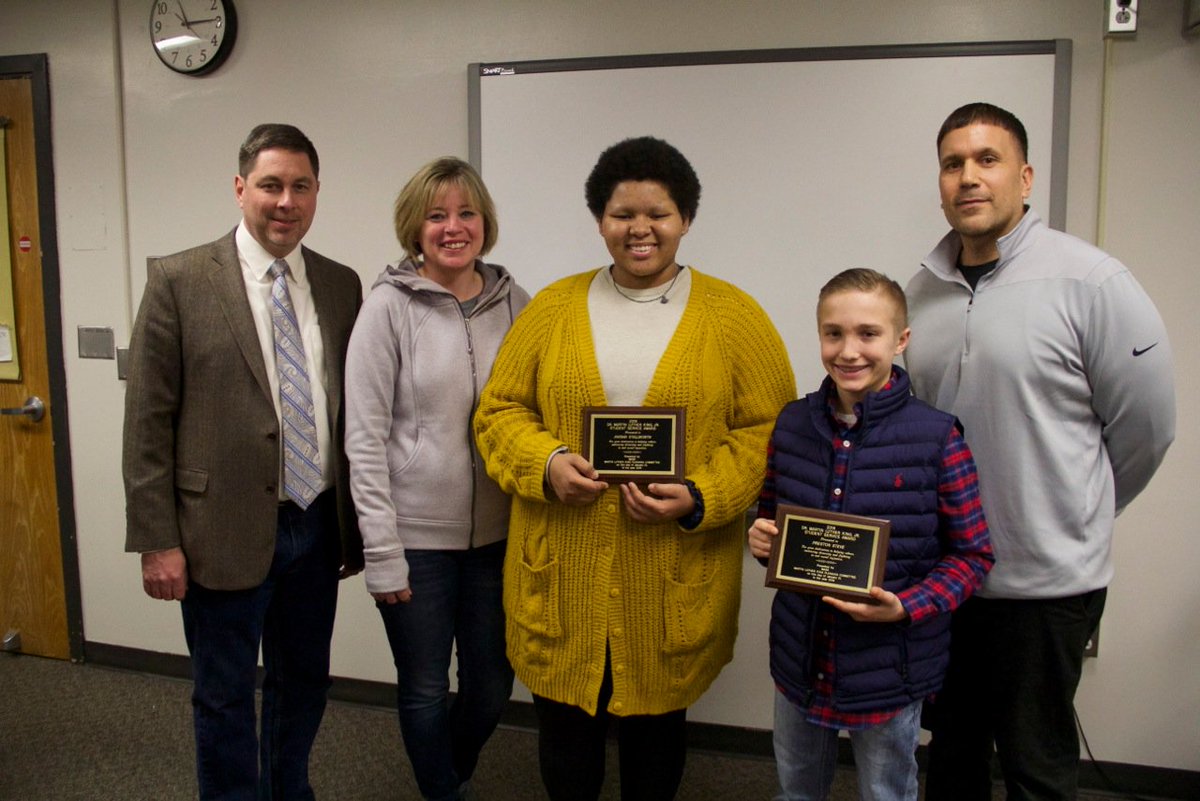 They are presented annually at the W.A.R.E. (Wayne Action for Racial Equality)-sponsored celebration on the federal holiday _ the third Monday each January_ commemorating the slain civil rights leader’s birthday.

This year it was January 21st at St. John’s Lutheran Church in Lyons, but a major snowstorm in the region prevented many from attending including Newark Middle School eighth grader Preston Steve and Newark High School senior Anisha Stallworth.

So the two NCSD students received their awards February 8th in a brief, informal recognition ceremony in the Newark High School library.

Superintendent Matt Cook, who has long been involved with W.A.R.E. and each year facilitates the student nomination process throughout Wayne County, congratulated the two students on receiving the awards based on the following criteria:

Stallworth, daughter of Toni and Jerry Stallworth of Blue Cut Road in Newark, was nominated for the award by her School Counselor Sue Gardner.

“I nominated Anisha because of all the hard work she has done here at Newark High School over the past years. We have watched her grow into a well-rounded, sophisticated young lady who is always willing to do what is asked of her. She goes above and beyond in everything she is involved in and really makes a difference in the student body at NHS. Anisha is an amazing young lady who I know will continue to shine for years to come.”

Most of Stallworth’s achievements at NHS pertain to her involvement and stellar accomplishments with the music program.

She is a member of NHS Vocal Jazz, Chamber Choir and “Downbeat.” She’s participated in all of the NHS musicals and dramatic performances; has been in All-County Chorus, Area All-State the NYSSMA Solo Festival several times.

Stallworth is one of only a very few students at least for over the last three decades in the NHS music program to have been selected to participate in one of NAfME’s Eastern Honors Ensembles in April 2019 in Pittsburgh, Pennsylvania.

She qualified to apply for inclusion in one of the 2019 NAfME All-Eastern Honors Ensembles because she was selected to be a part of the New York State School Music Association (NYSSMA) Conference All-State in November at the Rochester Convention Center.

Stallworth, who is also a member of Link Crew and National Honor Society, hopes to attend Marymount Manhattan College in the fall and begin her studies in musical theater.

Steve, the son of Brad and Deanna Steve of Peirson Avenue in Newark was nominated for the award by Mike Crespo who is Director of Programs at the Wayne County Youth Advocate Program.

“Preston shows to be a leader in school and in the community as well. He is always there to lend a hand and be there for a friend, or anyone for that matter, in need. He exemplifies someone that embraces diversity in the community that he lives in and makes strides to implore others to do the same.

“Preston plays on teams in the community with a very diverse group of peers. He has taken the initiative to organize multiple team gatherings to help spark team bonding. He has taken it upon himself to make sure some of the members of his teams, that were not as outgoing, felt comfortable and were able to come out of their shell and participate and have fun with other members of their team.

“Preston strives to make sure that all his peers from their team feel included as he looks to showcase each kid’s strengths and uniqueness. In closing, Preston is in a position where he is able to help people from different social and ethnic backgrounds come together and find some common ground and improve relations amongst a diverse community that he lives and plays in.”