Governor Andrew Cuomo signed legislation that he says begins the process of bringing New York State’s voting laws into the 21st Century, a central goal of his 2019 Justice Agenda for the first 100 days of the new legislative session. 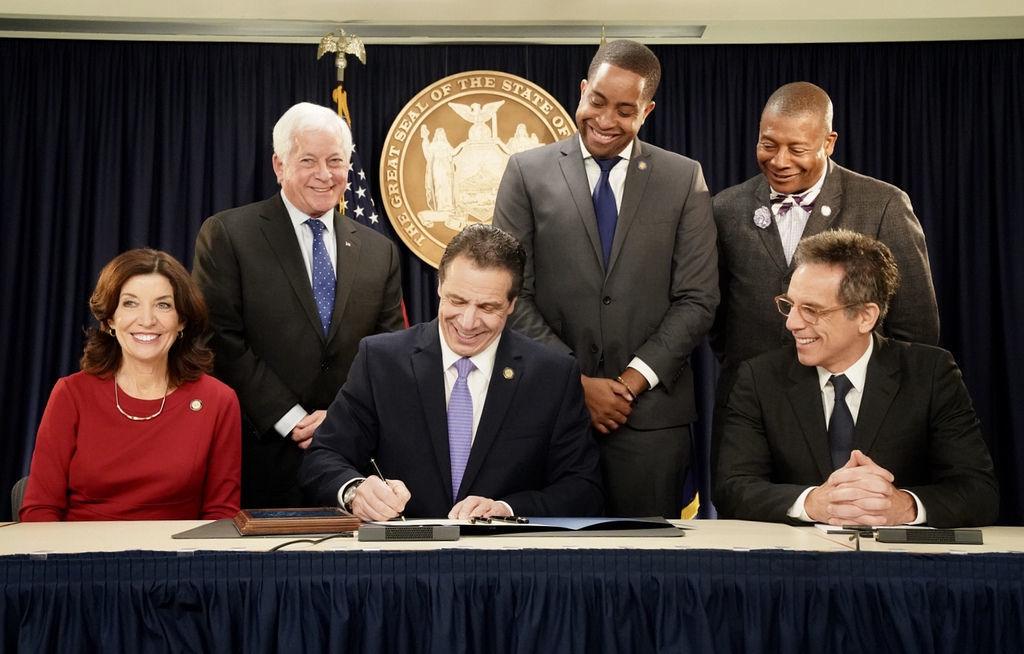 The new laws will allow for eight days of early voting before an election, synchronize federal and state primary elections, allow voter preregistration for teenagers, provide voter registration portability within the state, and close the LLC loophole.

“At a time when the federal government is doing everything it can to disenfranchise voters, we are breaking down the barriers that have discouraged too many generations of New Yorkers from exercising their right to vote,” Governor Cuomo said. “I’m proud to sign into law these important voting reforms that are part of our first 100-day Justice Agenda but this is only the beginning. We are going to finish the job and enact additional reforms in this year’s budget including automatic registration and extending upstate voting hours to once and for all make it easier for New Yorkers to make their voices heard at the ballot box.”

“As Chair of the Women’s Suffrage Commission, I advocated for much needed voting reforms statewide,” said Lieutenant Governor Kathy Hochul. “With early voting, preregistration and other reforms, New Yorkers will have expanded access and opportunity to participate in the democratic process. This is only the beginning – we are committed to advancing additional measures to further modernize and strengthen our voting system. This common-sense legislation will increase voter participation and strengthen our democracy.”

Governor Cuomo signed the following voting reforms — the first bills approved by the Legislature in the 2019 session — into law:

In addition, the Governor celebrated the passage of two resolutions for Constitutional Amendments:

Senate Majority Leader Andrea Stewart-Cousins said, “Government should be about breaking down barriers. We need more voices in our democracy, not fewer. Easing access to voting and having New Yorkers exercise their Constitutional right to have their voices heard shouldn’t be partisan or controversial. Other states have taken the lead on issues like early voting, same-day registration, pre-registration, and no-excuse absentee voting. It is time for New York State to catch up, so we can once again lead the way forward.”

Assembly Speaker Carl Heastie said, “For years, the Assembly Majority has worked to make it easier for voters to cast their ballots, and while New York has prided itself on being a progressive leader, our antiquated election laws have lagged behind. It was a pleasure to work with our partners in the Senate Majority to get real reforms – expanding access to the democratic process and bringing more transparency to our campaign finance laws. I look forward to continuing our work together to move New York State forward.”

Senator Zellnor Myrie said, “Voting is the right that protects all other rights, yet for too long, New Yorkers have been hampered by some of the most antiquated and regressive voting laws in the country. Early voting, along with all of these important reforms, will give more people the opportunity to vote and make our government more accountable to its voters.”

Assemblymember Charles Lavine said, “As a longtime sponsor of voting reform bills, today is an exciting day for the state of New York and our democracy. For too long, our antiquated voting laws have kept democracy in the dark, leaving staggering numbers of New Yorkers out of the voting process without a say in who should represent them. Today, we give a voice to the voiceless, and ensure that New York’s elections are simple, fair, and all encompassing. I thank Governor Cuomo for passing this critical legislation.”

Senator Brian Kavanagh said, “The legislation Governor Cuomo is signing today is nothing short of transformative. Until today, our state has had some of the worst election laws in the country, making it unnecessarily difficult to vote and allowing special interests to drown out the voices of millions of New Yorkers by giving unlimited amounts of money to politicians through LLCs. For years, Democrats in both the Senate and the Assembly, with the Governor’s support, have fought to change this, and as an Assemblymember I was proud to sponsor and pass nearly all of the bills being signed into law today–only to see them blocked by Senate Republicans. The sweeping reforms to our broken voting system that we are enacting under the leadership of Leader Stewart-Cousins, Speaker Heastie, and Governor Cuomo make it clear that we want every eligible voter to participate in our democracy without undue hardship. And closing the LLC Loophole—the most egregious defect in our campaign finance system—will cut off an enormous flow of unlimited, often virtually anonymous campaign contributions that have allowed certain individuals and narrow business interests to buy influence wholesale. This is a huge first step in what I hope will be a broader modernization of our campaign finance system.”

Senator David Carlucci said, “I thank the Governor for signing these necessary voting reforms into law. New York’s voting laws have now been brought into the 21st century, and will encourage people to get out and vote. I was proud to champion and sponsor bills allowing 16 and 17-year-old’s to pre-register to vote and universal transfer of registration.”

Assemblymember Jeffrey Dinowitz said, “For years, New York has been at the bottom of the list nationally because of our antiquated election laws. I am incredibly proud this will no longer be the case. In one fell swoop, we accomplished a number of long-sought election reforms which make it easier for people to cast their ballot and diminish the impact of money on elections. Furthermore, with legislation such as my voter portability bill, New York is beginning to lead and will continue to lead on policies that make it easier for people to participate in our democracy. Thank you to Assembly Speaker Heastie and the advocates who stood with us, persevering year after year as we passed many of these bills in the Assembly. Thank you as well to Governor Cuomo for his support in getting these reforms across the finish line and to Majority Leader Stewart-Cousins for finally getting these bills through the state Senate.”

Assemblymember Jo Anne Simon said, “New Yorkers deserve transparency and fairness in the electoral process and closing the notorious LLC loophole is an important step forward. New York will no longer allow the wealthy and special interests to anonymously pour unlimited amounts of money into campaigns in hopes of influencing preferred candidates. Closing the LLC loophole will blunt the outsized influence of those who control LLCs and enable the voices of average New Yorkers to be heard. I thank Governor Cuomo for expeditiously signing this bill into law because New Yorkers can’t wait another day for fairness.”