Steuben County’s Police Reform Plan is a notable accomplishment, meeting all its action items for the past year, with additional item activity planned for the remaining three years of the plan, according to county Sheriff Jim Allard.

Adopted by the county Legislature in January 2021, Steuben’s police reforms include a broad range of uniform best practices for law enforcement officers. They followed a state executive order for police agencies to develop initiative-taking efforts to reach the diverse populations in their jurisdictions.

Steuben’s resolution included policies already in place in 2020 and set in motion other policies to go into effect this year. 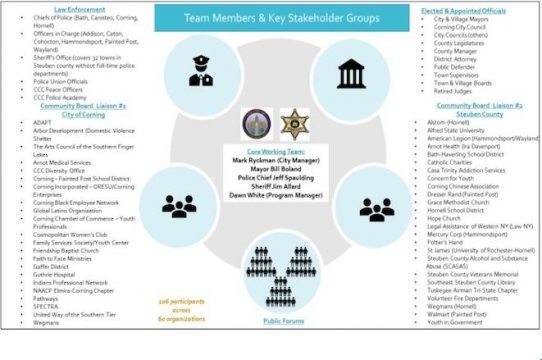 The reform plan was developed in coordination with local police departments, the county district attorney, municipalities and other stakeholders along with Corning Inc. consultant Dawn White.

According to Allard, notable achievements in 2021 include:

In addition, in line with the plan, police provided:

Other achievements in 2021 included

In a letter to all state law enforcement agencies, the county was noted for tackling social justice and equality head on by working to reduce personnel complaints and adopt a county-wide reporting method and tracking system to identify key behaviors amongst their officers.