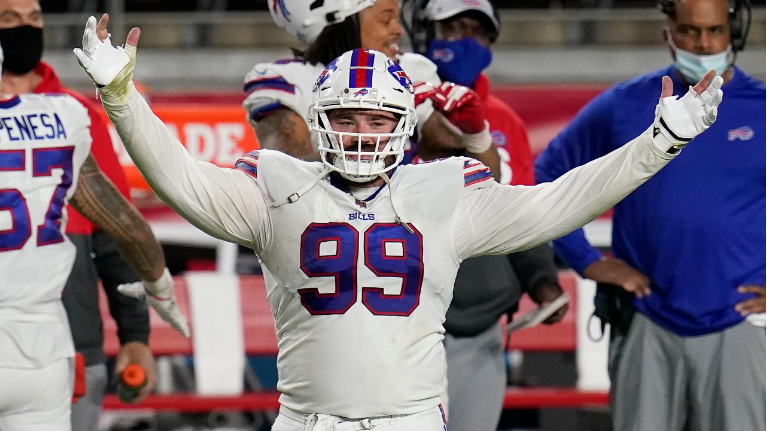 Harrison Phillips has been chosen as the Bills nominee for the Walter Payton Man of the Year Award, the NFL announced Tuesday.

This is the second consecutive season that the Bills defensive tackle has been nominated for this award.

The Man of the Year Award named after the late Chicago Bears Hall of Fame running back, Walter Payton, honors players for their charity work around the community and their play on the field. One player from all 32 teams is selected as a nominee and will receive up to $40,000 donated to the charity of their choice.

The winner of the award will have $250,000 donated to their selected charity.

Phillips does the majority of his work through his Playmakers Organization which supports children that are developmentally or physically different.

His latest community outreach event took place over the Thanksgiving holiday weekend. He rented out Dave and Busters for a night so that his playmakers and their families could enjoy a night of family fun.

When you rent out Dave and Buster's for all your best friends and their families, you know it's gonna be a good time! Love my Playmakers?❤️ pic.twitter.com/PwJc7Jtqfz

While he’s been in Buffalo some of the other charitable activities that Phillips has put on includes hosting a kickball game for youth athletes with intellectual disabilities, visiting a group of teen girls with cancer for the Kaely’s Kindness “Galantines Day Party,” renting out the Transit Drive-In for over 100 kids through his Playmakers Organization, and serving as the Keynote Speaker at the 2020 Special Olympics New York Winter Games.

The winner of the Man of the Year Award will be announced during NFL Honors on Thursday, February 10.