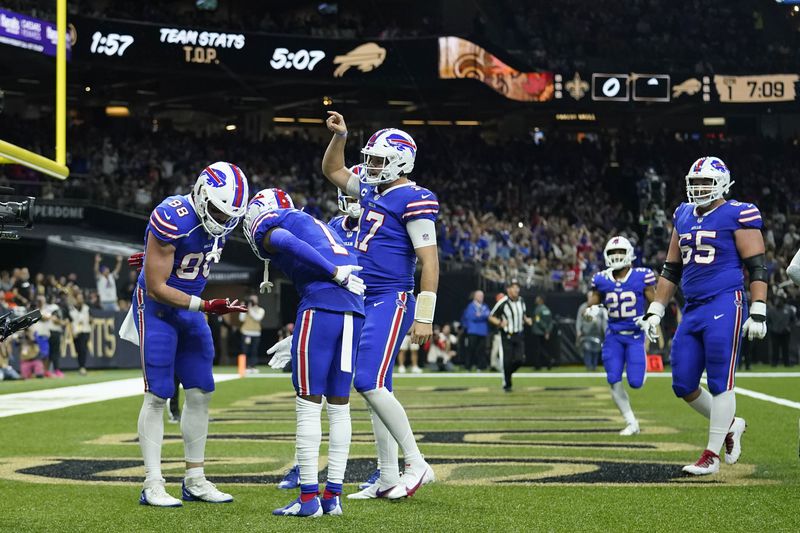 The Buffalo Bills offense hit some road blocks in the first half, but Josh Allen came out on fire in the 3rd quarter and led his team to a dominant win on Thanksgiving night. The Bills knocked off the Saints, 31-6 to improve to 7-4 on the season.

Despite a pair of turnovers, Allen was able to generate big plays with his arm and his legs. The first interception was a bad decision. He thought he had Stefon Diggs and didn’t get the ball out quick enough. It looked like he knew it was a mistake but had already committed to the throw. Bradley Roby stepped in front of Diggs and picked it off. The second was a bad breakdown on the offensive line and Allen’s arm was hit by a defender. Allen finished with three touchdown passes and a quarterback rating over 100 for just the second time in his last four games.

Buffalo caps off Thanksgiving with a win in NOLA ? pic.twitter.com/2QZae6Waul

#Shoutout: The Bills held the Saints to 1.8 yards per carry, the lowest by a Bills opponent with 25+ carries since 2003. pic.twitter.com/DlCc37I4pd

A big win for the @BuffaloBills in the Big Easy! pic.twitter.com/H0uCxW6Qwt

Thanks to #BillsMafia in NOLA and back home for sharing your Thanksgiving with us! pic.twitter.com/7WDZlaJeH9

Route so pretty you need to watch it again.

And #BillsMafia made their presence known ? pic.twitter.com/AkSBcRAMhG

Bills Mafia showed UP. I’ve never seen anything like this. pic.twitter.com/ZH7GhRhOWz

Josh Allen dominated the Saints blitzes, completing all 6 of his passes for 97 yards and 2 TD without being pressured once (+12.2 pass EPA on blitzes, 2nd-most in career).

The #Bills had nine defensive linemen play on at least 25% of defensive snaps in their 31-6 victory over the #Saints, their fifth game doing so this season.

The rest of the NFL has only had three such games this season.#BUFvsNO | #BillsMafia

Sean McDermott said he believes the refs missed a clear roughing the passer call on Josh Allen in the third quarter. He said it was a clear as day penalty and he wants to protect his quarterback.

Sean McDermott doesn't have an update on Tre'Davious White's status. He left the game with a knee injury and did not return. McDermott says they should know more in the next couple days on White's status.

Ed Oliver had to get 40 tickets for friends and family tonight.

He joked he basically played for free because his mom was in a box ?#BillsMafia @WKBW

Sean McDermott confirms Isaiah McKenzie was a healthy scratch and was not out because of an injury.

Good to see the #Bills back on track but be real the #Saints weren't going to compete with them tonight. Monday Night Football with the #Patriots will be interesting and an actual good competitive game.

If you follow @ProFootballDoc , you know he is usually right on these things. He joins #Bills fans in hoping he is wrong. https://t.co/hhekZrywP6

Allen now has 25 passing TDs this season, tying Jim Kelly (1991) for the most passing TDs by a Bill in the first 11 games of a season.

Dawson Knox finds the end zone for the second time tonight and seventh time this season.

That sets a new franchise record for receiving TDs in a season a Bills tight end.

Isaiah McKenzke and Zack Moss appear to still be in good spirits after tonight’s game despite being healthy scratches. ? pic.twitter.com/X1N7qRQSlb

Thanks @BuffaloBills we all needed this

Certainly feels like Matt Breida is the #Bills RB1 now.

Here’s a look at just one section of the #BillsMafia who stayed postgame to cheer on Josh Allen and other #Bills players. pic.twitter.com/PKPKeOeFw4

At 7-4, the #Bills now take back over first place in the AFC East.

With the same record as NE & no head to head games, the division tiebreaker goes to division record which the Bills have the advantage in (3-0 vs. NE's 2-1.)

Jordan Poyer says the turkey leg was a little dry & it could use a little seasoning on it. Says no offense to whoever cooked it… According to NBC, the turkey legs were prepared by world famous chef, Emeril Lagasse ?

Buffalo will have a short week of prep before the team heads to New Orleans on Wednesday for a Thanksgiving night matchup against the Saints.

While this game doesn’t necessarily have playoff implications, it is important for both teams if they want to keep their playoff chances alive. The Bills are second in the AFC East (6-4) and the Saints are second in the NFC South (5-5). Both teams have won just two of the last five games and the Saints are currently riding a three-game losing streak. Buffalo and New Orleans also rank seventh in the conference standings, which means if the playoffs started today, they would be the last two teams in.