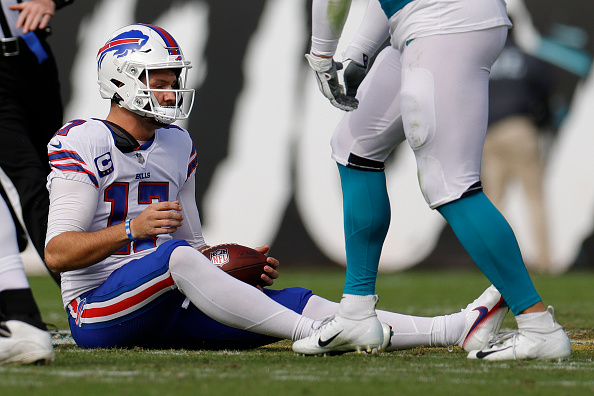 For the second straight week, the Bills struggled against an inferior team that entered with just one win.

This time around, the Bills were unable to come away with the win as they fell to the Jacksonville Jaguars 9-6.

The Bills were able to get field goals on their first two drives of the game but followed that up with three punts, two interceptions, a fumble, and a turnover on downs.

With the first half winding down, the Jaguars were driving and reached the red zone, but Carlos Hyde fumbled the ball away. Entering the fourth quarter, the game was tied 6-6.

The highlight of the first 45 minutes of play was the Josh Allen on Josh Allen oddities. Late in the first half, Jacksonville’s Allen sacked Buffalo’s Allen, the only time a player has been sacked by a player with his own name.

In the fourth quarter, the madness continued. Early in the quarter, Jacksonville kicked a field goal to take a 9-6 lead. On the ensuing drive, Allen fumbled the ball away and it was recovered by Jacksonville’s Allen.

With one final chance to tie or win the game, Allen took a sack on third and seven at the Jacksonville 39 yard-line. On fourth and long, Allen could not find an open receiver and threw an incompletion to Stefon Diggs.

Devin Singletary was the team’s top running back, finishing with a mere 16 yards on five carries. Zack Moss left the game with a head injury. Diggs was the top receiver with six catches for 85 yards, but was invisible for most of the game.

Taron Johnson left the game and was ruled out with a concussion.

We just watched the worst game of the Sean McDermott era.

With the Bills’ loss to the Jaguars, the Patriots are just a half a game back in the AFC East.

A really, really #suboptimal four days in Pegulaville.#Sabres trade Eichel, suffer torturous losses to Seattle and Detroit, and then that #Bills game was just mind-numbingly bad to all-time levels.

Buffalo closed as a 15.5-point favorite.

This is the 4th-largest road upset loss since 1966.

This is without a question the worst officiating crew I've ever seen. How do you call a taunting penalty on the defense after successful 4th down conversion by offense? And then blatantly miss a false start on the 3rd down. Micah Hyde is incensed. He should be.

This isn’t one of those games where you can just blame one person. Everyone on offense came up short today. They just scored six points against the Jags.

#Bills QB Josh Allen, with his voice half-gone: “I played like shit. Excuse my language.”

The Bills are getting ready to face their third opponent in the AFC South this season. Buffalo will head to Jacksonville to take on a team with just one win for the second straight week.

In those six games, rookie quarterbacks have thrown for only four passing touchdowns, while throwing 13 interceptions. They also post an average of a 58.7 passer rating and have been sacked 15 times. Mills posted the lowest passer rating (23.4) and Devlin Hodges and Mills threw for the most interceptions (4) against the Bills.

The reason why rookie quarterbacks have struggled is because Buffalo’s strong defense makes rookie quarterbacks fight for every yard. When they played Houston in Week 4, the Texans didn’t score one point on the defense. The Jaguars know the best defense in the NFL won’t make it easy for Trevor Lawrence.