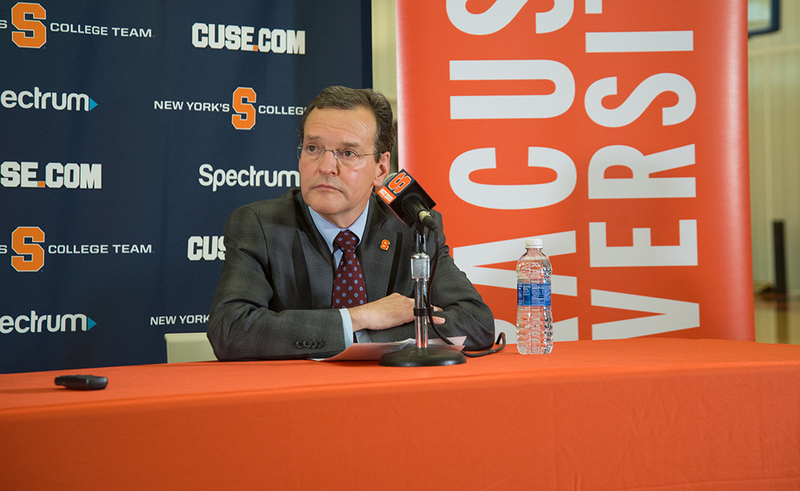 It has been a little over a month since Syracuse Women’s Basketball Coach Quentin Hillsman resigned amid an investigation into the way he led his program.

The investigation came only after an article from Chantel Jennings and Dana O’Neil of The Athletic who spoke with former players who felt threatened and to some who allege inappropriate touching.

Since then, SU received the report conducted by an outside firm and Athletic Director John Wildhack had yet to speak publicly about situation until today.

Wildhack began by thanking the 55-plus individuals who spoke with investigators and outlined steps the university has taken to improve the program’s standing with its players. He also said he was sorry.

“To the student athletes and staff who had a poor experience in the program, I apologize.”

What Wildhack apologized for was a “breakdown in systems and processes” along with a “breakdown in people who did not come forward and voice concerns to the appropriate people in the athletic department.”

Whether Wildhack is referring to the student athletes or program leadership in terms of who failed to come forward to the appropriate people is unclear. What is not unclear, is where the program is headed from here, and who is leading it.

After Hillsman’s resignation, Wildhack named former Hillsman assistant Vonn Read as the acting head coach; a decision criticized by some who wonder how much Read knew, or was part of, the previous culture.

When citing his reasons for naming Read to his position, Wildhack told the media he spoke with current players and some of their parents, and received satisfactory opinions of Read’s coaching and teambuilding.

“Coach Read is the architect of system, both offense and defense. Our team members were recruited to play in this system. In evaluating what was best for our student athletes, it became clear that Coach Read could provide the stability and continuity that the program needs,” Wildhack said during a prepared statement.

44 mins ago
Any emergency assistance provided throughout the pandemic will not impact social security benefits. It will not change eligibility either. To ... MORE