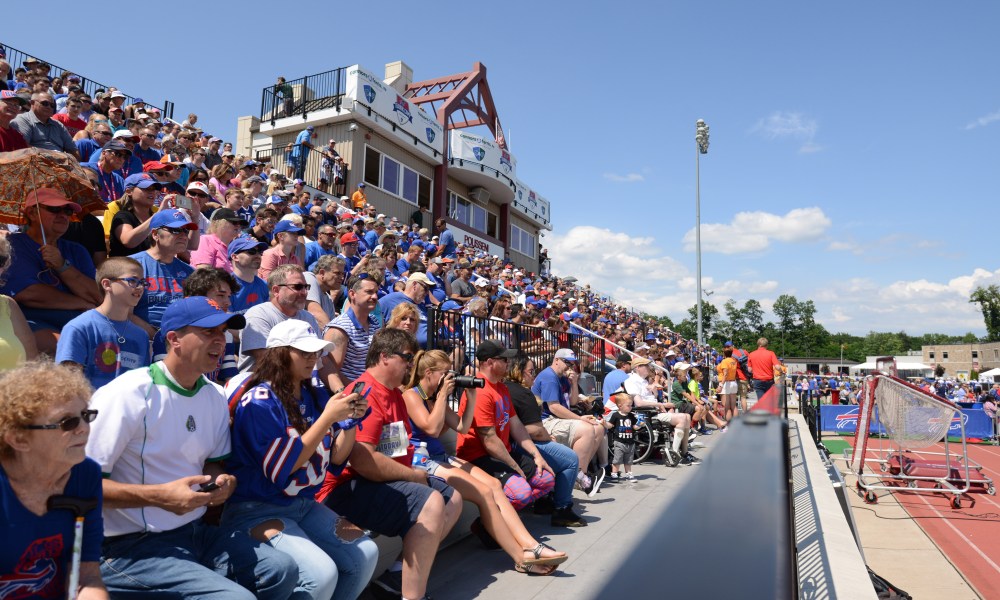 The Buffalo Bills held their training camp at St. John Fisher College outside of Rochester, New York, every summer since 2000, but for the last two years, due to COVID-19, the team has moved its training camp back to its Orchard Park facilities.

That includes this summer, when Buffalo opened its training camp July 28 in Orchard Park.

The original contract between the Bills and Fisher was set to expire after the summer of 2021, so when Buffalo announced it was relocating camp to Orchard Park for this year, many fans assumed it meant the end of the partnership with St. John Fisher.

And it appeared to be the truth, as earlier this summer — on June 7 — news broke on Twitter that Buffalo’s training camp contract with St. John Fisher had come to an end after the two sides failed to negotiate an extension during the pandemic.

However, on Monday, during a conversation with John Wawrow of the Associated Press, Bills general manager Brandon Beane gave a glimmer of hope to fans hoping the team brings camp back to Fisher.

According to Wawrow’s tweet, he “had a good chat” with Buffalo’s GM, “who reiterated, without prompting, how much he misses camp at St. John Fisher and wanting to get back there as soon as possible.”

While Beane and head coach Sean McDermott have always professed to enjoying holding training camp down the Thruway in Rochester, the Bills were one of only nine NFL teams not to hold training camp close to their team facility.

The Bills have a state-of-the-art training facility, as well as two outdoor grass practice fields to use. Additionally, they can move inside the fieldhouse in the case of inclement weather.

Only time will tell if the Bills will one day return to Fisher for training camp. If Beane gets his wish, that day could be coming sooner than later.