If not for a global pandemic in 2020 the most-memorable catastrophic event that residents of Lodi might recall is the historic flood of August 2018. It was a devastating day that came without warning- and left residents at Lodi Point reeling as more than 10 inches of rain fell in a span of hours. The nearby town of Hector recorded more than 11.5 inches of rain officially in the same devastating storm.

Homes, campers, cars, and even roads were washed away leaving little behind. Work has been underway for more than two years, but it’s far from over, according to Lodi Town Supervisor Kyle Barnhart.

“Unfortunately, we are still recovering,” he explained. “There are still homes being rebuilt. We still have concerns over some of the stream restoration work the DEC did in the wake of the flood, which has put more homes at risk. We’re still repairing roads and culverts that were damaged in the storm, which will probably last for a few more years.”

Specifically, the work in question involved restoration of creek beds near Seneca Lake in the days around the flood. “Their restoration left the creek in much different shape than before the flood, which is understandable to some extent, but the work they did has been causing erosion and other issues that are putting more homes and property at risk,” Barnhart continued. “We applied for grants to fix it and were denied, and we’ve complained up the latter at the DEC to fix it- but have been ignored.”

He says that the Town cannot even get an estimation for cost until the DEC works with a hydrologist to make a better plan. “The DEC has essentially walked away. There’s a lot of homeowners down there that are truly frightened of what will happen if we get another rainfall event like the one from 2018.” 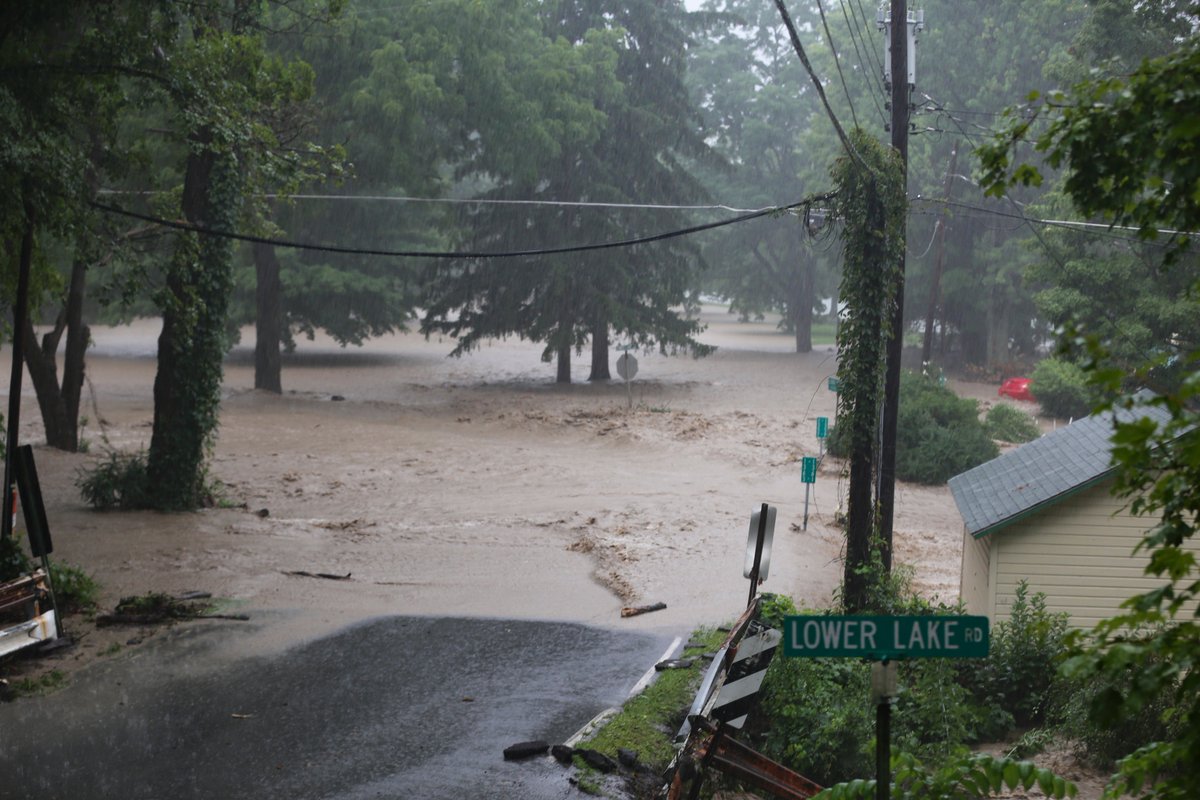 In August 2018 Lodi Point was devastated by an historic flood. It took months to clean up, and recovery is still underway around the community. Credit: Rachel Burkholder.

Another major concern is that despite those so-called restorations executed by the DEC it wouldn’t take nearly as much rainfall to create a dangerous situation. “A storm less than half that size could be dangerous or even deadly,” Barnhart explained. “We are feeling pretty helpless on that front.”

There isn’t any clear answer as to what comes next in this process either, but that doesn’t matter because the Town of Lodi is moving forward and working to build better for the future.

What’s Next In Lodi?

Elected officials learned a lot in 2020- by way of technology that kept them connected to taxpayers, as well as the volatility that always exists in municipal budgeting.

Lodi Town Supervisor Kyle Barnhart says the last 16 months has been challenging for a number of reasons. Most of those challenges boil down to problem solving- and the need for adaptive thinking as uncertainty grew during 2020. It was clear that the pandemic would end at some point, but at what cost- and how long would that take?

“The pandemic slowed our world to a halt,” the Supervisor recalled. “I’ve been able to really dig into budgeting and finance at the town level, but most of the lessons I’ve learned have been in communicating with the public.” Even for effective communicators like Barnhart, keeping people informed during the pandemic was a real challenge. Even state and federal officials have struggled with it.

“When I came into office with an ambitious plan to address our town’s issues, I’d get some pushback along the way because I wasn’t able to properly get information to the residents,” he continued. “I’m getting better at that, but the pandemic has certainly made reaching people more difficult.”

As for the Town’s financial situation- it’s positive. Barnhart attributed that to the previous administration, which was led by former Town Supervisor Lee Davidson. At this point, strategic investment over the next decade is paramount to the Town’s short- and long-term planning.

“We’re building a new town hall and I’m excited to see how the conversations with the community go,” he said. “We have the opportunity to tackle a lot of community needs in one shot with this new facility, which will ensure the continued operation of our local food pantry, as well. We got a great deal on the site and saved the community hundreds of thousands of dollars in construction costs. That’s the big short term goal for the town right now, doing that right.”

As for that long-term vision, the biggest items on the to do list focus on economic development and the environment. “Ultimately, the environment is always top priority for me and we have first-hand experience with environmental disasters in Lodi, coming off of the 2018 flood. I’m fighting hard against the Greenidge Generation plant across the lake from us in Torrey and this is an issue on which I see no compromise. Seneca Lake must be protected at all costs,” Barnhart explained. “For economic development, we need the essentials. We still need water. We’re exploring all of our options, but the pandemic dried up grant funding and threw everything we were working on into uncertainty, which essentially drove public interest for the project into the tank.”

He says at this point, the Village is taking the lead on a water project, and that could be a great thing for the community. “It looks like they may find themselves in the best funding environment imaginable as the state gets back in gear and the Democrats in Congress hopefully pass a long-awaited infrastructure bill.”

Speaking to the long-debated North-South Seneca divide, there’s a diversity of voices coming forward to get involved and that’s a ‘win’ in the eyes of the supervisor from Lodi. “We see a Lodi business owner in Bruce Murray getting involved and becoming the chair of the Chamber of Commerce, or the handful of residents from the south end that have expressed interest in serving in the recent IDA vacancy,” Barnhart continued. But it’s not all positive news at this moment, and will require more effort “There has been a lot of investment in developing the north end, especially over the past decade, and it’s for good reason, but I’m watching our villages and hamlets down here literally fall to pieces. This is the primary impetus behind my push to share the sales tax with towns and villages–it is so desperately needed and would make a drastic, tangible difference,” he added. “We’re talking about public services like trash collection, clean water, and clearing dangerous and dilapidated properties. There’s so much to do.”

But what role did the pandemic have in hurting some of that progress being made in the south end of the county? Barnhart says it’s a two-fold problem: First, there are the pre-existing challenges that communities like Lodi were facing. Then second, new issues were exposed during the pandemic.

“My fear for all of these small towns across New York is that the pandemic has shaken what little life Main Streets were hanging on to,” he said. “We’ve shifted our buying habits online. The labor market is unrealistically difficult for local businesses. For many, the thought of going in public still carries that tinge of risk. So many businesses on Main Streets barely hang on as it is. In Lodi, right as we are looking to build ours back from scratch, the pandemic comes along and stops any momentum we had. I’m worried that we are losing our sense of community and our ability to come together. I’m worried that our residents are more alienated than ever and have lost the few social outlets we had in Lodi. We need to be able to re-engage with each other and town government has a responsibility to address those needs, so I’ll be considering that in our town’s efforts going forward.”

Barnhart says his outlook is realistic, but also incredibly optimistic.