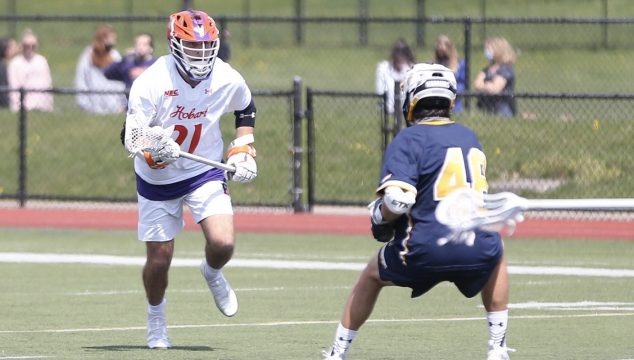 Junior midfielder Bradley Simas whipped a worm-burner into the lower left corner of the cage to give Hobart College a 9-8 overtime win at Wagner College this afternoon. The win clinched a spot in the four-team Northeast Conference Tournament for the Statesmen, who can secure the No. 2 seed and a semifinal home game with a win over Sacred Heart on Saturday.

In OT, senior Drew Blanchard capped a sterling effort at the X, winning the opening faceoff thanks to a crafty ground ball pickup by classmate Dan Ryan. Hobart advanced the ball into the box and called timeout to draw up the final play. Seconds later, senior Tommy Mott threw a 10-yard pass to Simas, who popped up off the crease to make the catch about 7 yards off the goal line. He spun to his left and slung an underhand shot past goalie Danny Brady.

The Seahawks’ Stephen Dwyer accounted for half of his team’s goals, scoring once in each quarter. Brady made 12 saves.

The Seahawks were the only team outside of the NEC top four that could have moved up into a tournament spot. Wagner needed to win each of its three remaining games and played with an appropriate level of desperation and determination.

Hobart led 3-2 at the end of the first quarter thanks to the trio of Archer, Madonna and Mott. Madonna fed Mott for the opening goal less than two minutes in, then Madonna gave the Statesmen a 2-0 lead off a feed from Archer. The Seahawks battled back with consecutive goals less than a minute apart to tie the game, but Mott assisted on Archer’s first goal to push Hobart in front.

Blanchard needed just six seconds to tie the game in the third quarter. He won the opening faceoff, ran straight at the cage and fired home his first goal of the season. The Seahawks responded with back-to-back goals, seizing a 7-5 lead on Dwyer’s third goal at the 12:57 mark.

Madonna sandwiched a pair of goals around an unassisted tally by Archer to move Hobart ahead 8-7 after three quarters.

Dwyer tied the game for the sixth and final time with an extra-man goal 29 seconds into the fourth quarter. Hobart sophomore goalie Kevin Holtby, who had just one save in the first half, bounced back with a solid second half, stopping five of the eight shots he faced in the final 30:47.

Hobart improved to 7-0 all-time against Wagner. Three of the seven meetings between the teams have gone to overtime.

The Statesmen will wrap up the regular season on Boswell Field against the Pioneers (1-11, 0-7). Prior to the opening faceoff, which is currently scheduled for 11 a.m., Hobart will recognize its 16 seniors.