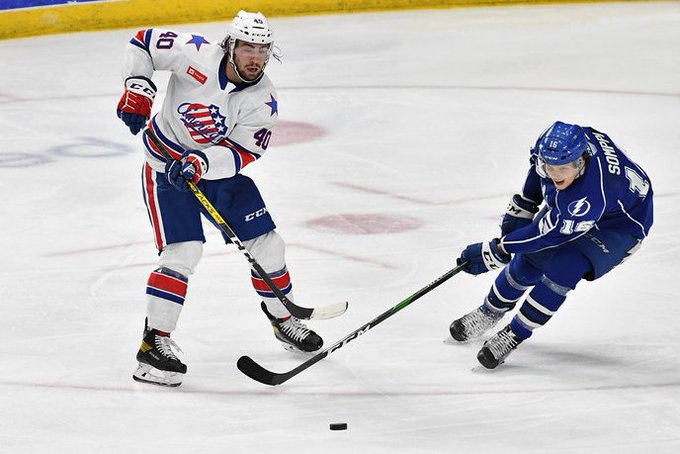 The Rochester Americans (8-11-2-1) erased a three-goal deficit midway through the second period but could not complete the comeback as the Amerks saw their winless streak reach six straight games with a 5-3 setback to the Syracuse Crunch (14-8-1-0) Saturday at Upstate Medical University Arena.

The contest was the 10th of 12 scheduled meetings between the two teams this season and second in the last four days. Prior to tonight’s matchup, the Amerks had recorded points in six of the first nine get-togethers with the Crunch this season while also posting a 16-10-3-1 record in their last 30 games against Syracuse.

In his Amerks debut, defenseman and East Amherst native, Nick DeSimone, who was loaned to Rochester earlier in the week from the Vegas Golden Knights, led the club with a pair of assists. Forwards Remi Elie, Dominic Franco and Michael Mersch all scored for the second straight night as the Amerks rallied back from a 3-0 first-period deficit before Syracuse tacked on two more 21:02 of regulation.

With his goal, Mersch has tallied nine points (5+4) over his last seven outings while Franco has seven points (4+3) in his last nine games, including three straight games with at least one point. Elie, meanwhile, extended his point streak to four games as he has registered four goals and two assists over that span to take over the team’s scoring lead with 17 points (9+8) in 21 appearances.