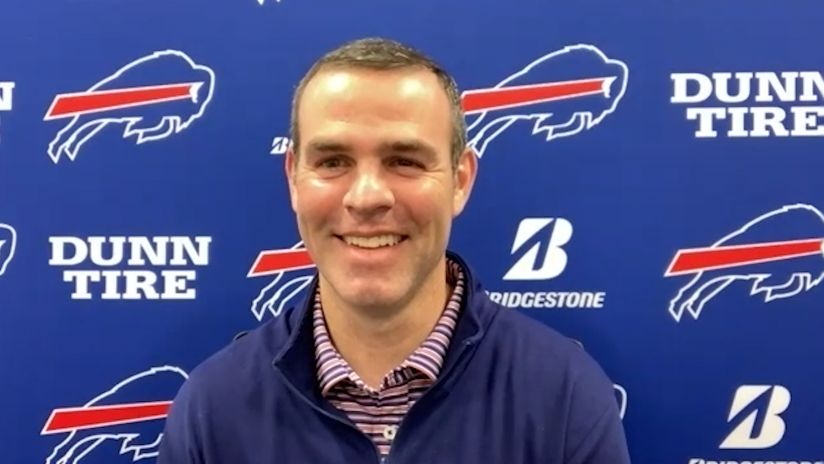 Bills general manager Brandon Beane met with the media over Zoom on Tuesday ahead of the 2021 NFL Draft. Beane touched on their first round pick, the option of trading up or down, Josh Allen contract talks and more. Here are five things we learned from his time with the media.

The name Josh Allen and the phrase contract extension are two things said together quite frequently as of late. Allen made a splash in his third season by scoring 46 touchdowns while completing 69 percent of his passes. With the Bills quarterback heading into his fourth season and the fifth-year option looming, what does general manager Brandon Beane plan to do? Per Beane, the quick answer is nothing will happen until after the draft. It’s the same case for linebacker Tremaine Edmunds who will begin his fourth NFL season this year.

“We’ve had some discussions, but really that’ll be front and center as soon as the draft is done,” Beane said. “The hard part this year is going to be the cap has gone down. I don’t know exactly where it’s going to be next year, but probably not a huge increase.”

The low salary cap number this year into the possibility of next year is one thing to consider when talking about the contract extensions of two players who won’t be cheap. Beane explained it’s not optimal to pick their option up if he doesn’t plan on keeping them in Buffalo for a while.

“Josh’s number is in the 20s because of a Pro Bowl,” Beane said of the millions Allen can expect in a new deal. “Tremaine has made a couple Pro Bowls, he’s pushing 13 (million). You can’t really be flexible with those cap numbers. So we’ve got to make sure if we pick them both up, that we’re going to have close to 35 million space in next year’s cap. It’s not an ideal scenario to pick them both up and not extend them.”

Beane shared that he has spoken to Allen as well as one of Allen’s representatives. He stressed that the deal has to work out for both sides.

“Josh wants to be here,” Beane said. “That gives me hope we’ll get something done at some point. I can’t guarantee you it will be this year. But the good thing is we do have time.”

In the 2019 NFL Draft, the Bills had the ninth overall pick. Last year they were slated for No. 22, but traded it for a game-changer in Stefon Diggs. This year, they move down even more to the end of the first round at No. 30 thanks to a successful 2020 season.

Will a flashy player still be available at No. 30? Is drafting that late in the first round a bad thing?

No fear. According to Brandon Beane, picking late in the first round is a good problem to have.

So maybe we just need to reconfigure how we look at No. 30. Beane has his mind set at glass half full when it comes to the end of the first round.

It’s good to remember that every team’s board is different and every team evaluates players differently.

“We stack the board the way we see it,” Beane said. “We don’t worry about where we’re picking. Some rounds we’ve got a decent amount of players, some round we may have 15 players.”

If the Bills choose to stay at No. 30, that means there is someone available who the scouting department believes will fit into Buffalo’s system and has a high enough grade.

But if the Bills are selecting that late in the first round, should we expect a player to make an immediate impact once he gets on the field or a developmental player who may take a season to grow?

“It’s going to depend on which position it is,” Beane. “I do think there are some positions if it worked out that way that maybe not definitely start, but you could say, ‘This guy’s got a shot.’ I think there’s some other guys we have on the board where we’re going, `This guy’s one heck of a player, but he’s not going to start Day 1, but we will count on him. Maybe in a year he’s going to be the starter.'”

Knowing what the Bills have in place and building on their 13-3 season that led them to the AFC Championship game, Beane is okay with not selecting someone who may start right away based on how the board may fall.

“We’ll think long term more than short term,” Beane said about the impact they’re hoping their first round pick will make. “But we’ll see how it goes. It’ll be a good player.”