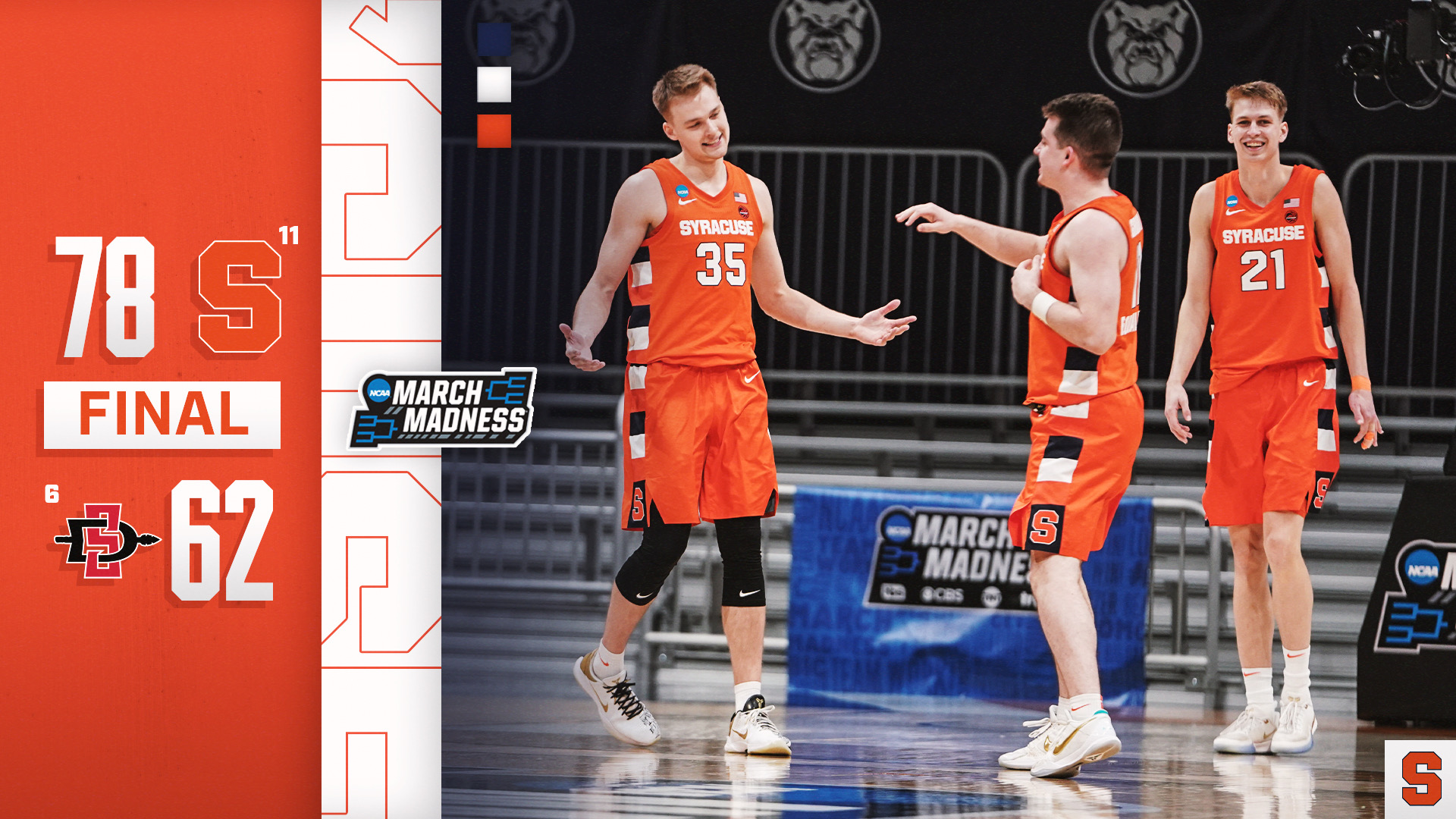 Syracuse was in its zone and Buddy Boeheim was in THE zone.

The combination of Syracuse’s 2-3 zone defense and the Orange’s hot-shooting junior overwhelmed the San Diego State Aztecs, 78-62, in the first round of the NCAA tournament on Friday night at Butler University’s Hinkle Fieldhouse.

Syracuse’s zone defense frustrated, confused and confounded the Aztecs, and Boeheim continued his recent hot streak with 30 points. Boeheim connected on seven of his 10 3-pointers.

San Diego State flailed away against SU’s 2-3 zone, making just nine out of 38 attempts from 3-point range. Overall, the Aztecs made just 34 percent of their field goals, going 22-for-65 from the floor.

Buddy Boeheim goes for 30 points and Syracuse advances to the Round of 32. The Orange held SDSU to under 36% shooting from the floor for the blowout win. Jim Boeheim moves to 24-5 in the first round of the tournament since 1985. Up next is either West Virginia or Morehead State.

Jim Boeheim as a double digit seed is dangerous. 2016. 2018. 2021? Syracuse dominates San Diego State from tip to finish. The Mountain West is OUT.

Buddy Boeheim made 7 threes, 2nd-most by a Syracuse player in an NCAA Tournament game (Gerry McNamara – 9 in 2004 Round of 64 vs BYU).

Boeheim is the 1st Syracuse player with 30 points on 70% shooting in an NCAA Tournament game since Rony Seikaly in the 1987 Sweet 16 vs Florida. pic.twitter.com/kNO0Uw318b

Buddy Boeheim just passed his dad and HC Jim Boeheim for most PTS scored in an NCAA Tournament ❤️ pic.twitter.com/ETGxiGeJ4T

Syracuse makes its 41st NCAA Tournament appearance as an 11-seed on Friday evening when it faces sixth-seeded San Diego State in the first round. Tip off from Hinkle Fieldhouse is set for 9:40 p.m.

The Orange enter the NCAA Tournament having won three of their last four contests. Syracuse defeated two tournament teams (North Carolina and Clemson) at home to close the regular season and earned a dominant 89-68 victory against NC State in the second round of the ACC Tournament. In the quarterfinals of the conference tournament, Syracuse stood even at 69 with top-seeded Virginia before a buzzer-beating 3-pointer from Reece Beekman dashed the Orange’s hopes of an upset.

San Diego State speeds into the tournament on a 14-game winning streak. As the top-seed in the Mountain West Tournament, the Aztecs downed Wyoming and Nevada before defeating second-seeded Utah State, 68-57, to claim the conference crown.

Syracuse is 2-0 all-time against San Diego State. The teams played on November 11, 2012 aboard the retired aircraft carrier USS Midway. The Orange emerged victorious in the contest, 62-49.

Inside the Bubble: Life with the Orange on their first days in Indy#MarchMadness pic.twitter.com/aZZfmXF8iy

We believe in us. 🍊✊#MarchMadness pic.twitter.com/CTeTCNzbCA