One of the most-influential leaders in the business community is speaking out about the pending decision to approve or deny an operating permit for the Seneca Meadows Landfill, and how it could impact their long-term choice to continue expansion.

According to Bruce Bonafiglia, President of BonaDent & Danaren Dental Laboratories, it’s time for the Seneca Falls Town Board to take the tough, but necessary step of denying Seneca Meadows, Inc. its operating permit for the facility along State Route 414.

“Agreeing to renew their permit at this time would be shunning your responsibility as leaders to see that our host agreement is followed by both parties,” he said in the letter obtained by FingerLakes1.com. “The landfill has continued to operate, to receive trash, to be paid to receive that trash, yet they constantly threaten our community with litigation and withholding payments due. ‘Bullies’ make threats of that kind, not ‘neighbors’.”

BonaDent and Danaren Dental Laboratories says its ready to continue expanding its facility in Seneca Falls, with a 15,000 square foot addition. “It is a solid business plan to help our company to compete against offshore dental laboratories in China and a plan that will create 50 additional jobs for our community,” Bonafiglia added in the letter. “We currently have a tremendous team of over 200 employees that has played and will continue to play an important role in our community’s success. To afford those employees career longevity and financial growth, our business has to grow.”

Bonafiglia said recruiting has become increasingly difficult, despite its industry leading facilities in Seneca Falls. “As the landfill grows it becomes increasingly more difficult to recruit talented professionals to live in our area. Despite the world-class facility we’ve built in Seneca Falls, we struggle with professionals in our industry choosing to work in our satellite locations over our Seneca Falls location,” he said.

“Our companies want to move forward with the expansion project and the timing could not be better, but we need the assurance from the Seneca Falls Town Board that Local Law 3 will remain in effect and the SMI Landfill will be held accountable for upholding their end of the Host Agreement in their remaining years,” Bonafiglia added. “Do not allow the continued threats of lawsuits by a billion dollar company based in Texas to deter you from your responsibility to your neighbors, the residents of Seneca Falls. Vote no on renewal until they comply and let’s begin to financially plan for 2025, the date that SMI themselves negotiated some 10 years ago.”

In early-April the Town Board tabled the motion to grant Seneca Meadows a new operating permit. At the time, odor control was the major contributing factor. The permit has been perpetually tabled for well over a year by current- and past-boards.

During that April session, Councilman Doug Avery called for the creation of an odor monitoring system that the public can trust before a permit be issued. Supervisor Ferrara on the other hand, said it would be ‘irresponsible’ to not issue the permit, based on potentially jeopardizing first- and second-quarter revenues from the host agreement between Seneca Meadows and Seneca Falls.

The company has reportedly threatened to sue if the Town does not issue a new permit.

Supervisor Ferrara said that he would meet with Seneca Meadows Regional Manager Kyle Black after April’s meeting to come up with a plan for odor reporting. The operating permit will be on the agenda for Tuesday’s meeting. It’s unclear what kind of action may be taken.

The meeting will be streamed LIVE on FingerLakes1.com on Tuesday below:

Read the full letter from Bruce Bonafiglia to Supervisor Ferrara and the Town Board below: 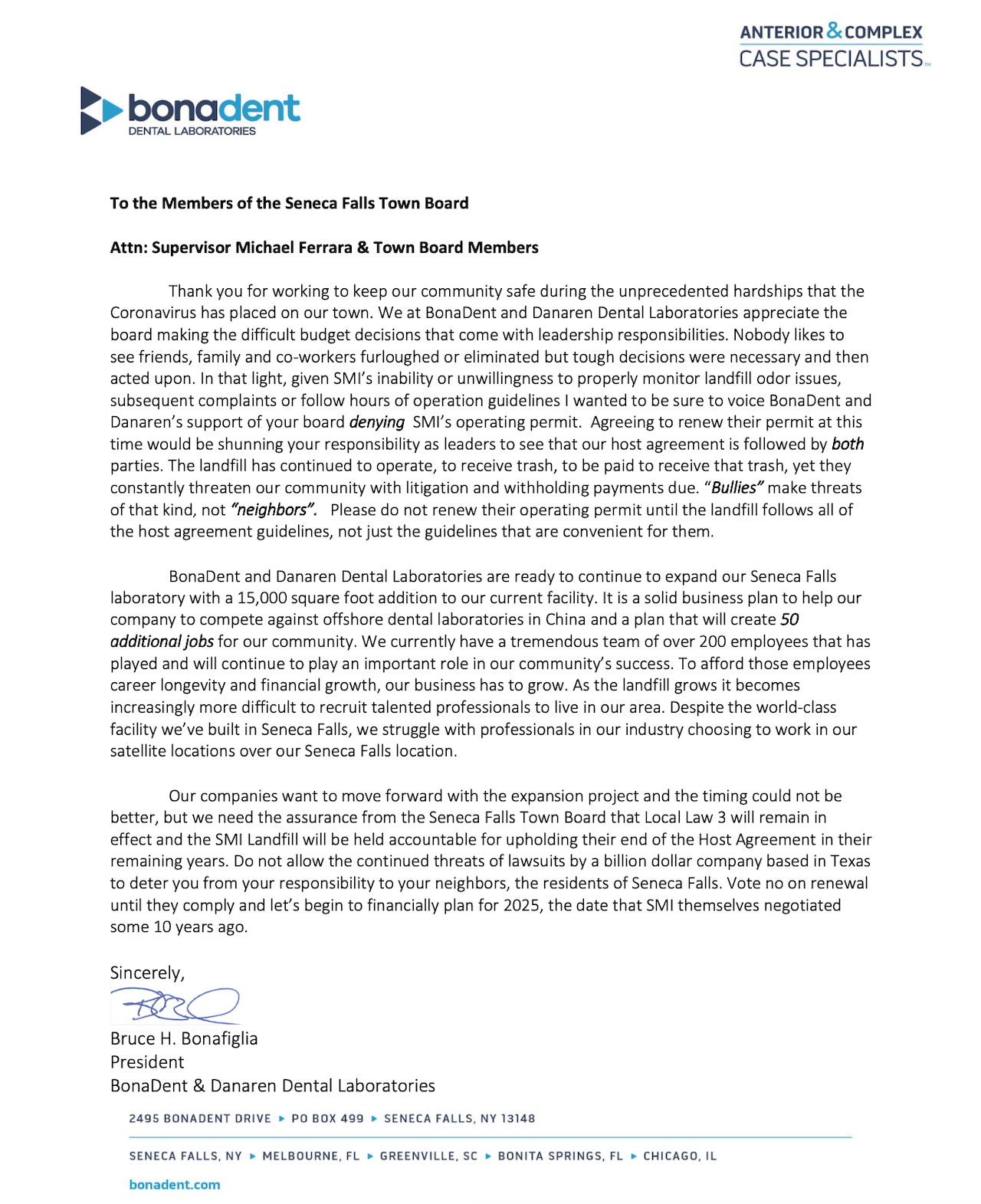