The Rochester Americans (33-19-4-5) faced a one-goal deficit going into the final period of regulation, but thanks to three unanswered goals, including a pair in the final 1:12, the Amerks completed the weekend sweep over the North Division-leading Belleville Senators (38-19-4-1) with a 4-2 victory in the season series finale between the two teams Saturday at CAA Arena.

With the win, the Amerks, who have earned 15 out of a possible 22 points in their last 11 games, hold a two-point lead over the Comets for second place in North Division standings. Rochester also boasts an 8-0-2-0 record all-time in the road portion of the head-to-head series while also claiming at least one point in 13 of the first 18 meetings with the Senators dating back to the 2017-18 season. 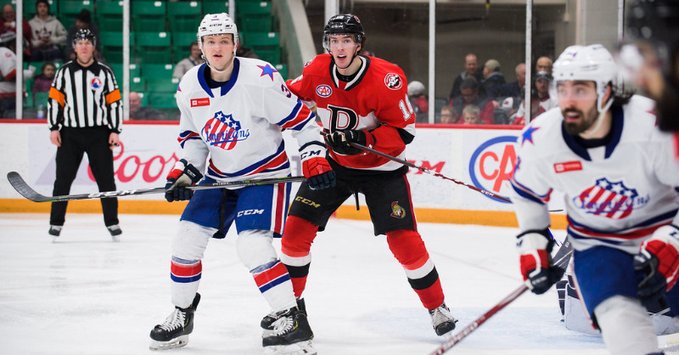 Forward Taylor Leier opened the scoring with his team-leading sixth power-play goal of the season and 10th overall, while rookie defenseman Jacob Bryson scored his second marker in as many nights for the Amerks, who posted a 4-1-1-0 record against Belleville this season as well as a perfect 3-0-0-0 mark north of the border. Will Borgen notched his first goal of the season, which held as the game-winning goal, before Sean Malone sealed the win with his 12th of the campaign.