Police say that a Newark man was arrested twice within two days on separate DWI charges. 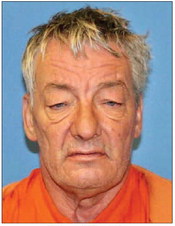 First, on Tuesday, September 10th around 1 a.m. they received a report of a disturbance. Responding officers found a pickup truck with its headlights on in the Wegman’s parking lot.

The driver was said to be heavily intoxicated, was found inside the store, and admitted he drove his truck to the store.

Police say the driver was Edward Timblin, 56, who lives in Newark.

He was found to have a blood alcohol level of 0.32% and was subsequently charged with DWI, aggravated DWI, and felony aggravated unlicensed operation.

Police say that his license had been suspended on August 30th, 2019 for an alcohol related offense.

After being taken to the hospital to be checked out; he was scheduled to appear in Newark Village Court on September 18th.

The next day, around 11:45 p.m. police again received a report of a man in a blue pickup truck. This time, he was said to be doing donuts in an area roadway.

The vehicle was spotted, and Timblin was again determined to be the operator. He was taken into custody with a blood-alcohol level of 0.34%.

He was charged with an additional count of felony aggravated unlicensed operation.