Doubledays get 1-hit by Valley Cats

With only two outs to work with in the ninth inning and zero hits recorded by the Doubledays, the dogs from the day’s Bark at the Park promotion we’re making more noise than the worried fans at Falcon Park. After being held to four hits on Friday and two on Saturday, getting no-hit would have been the worst way to end the series against the ValleyCats.

But, as luck would have it, there was something to cheer about at Falcon Park. On the first pitch he saw, a shallow pop-up from Landerson Pena fell between the left fielder and shortstop to give the Doubledays their first hit of the ballgame. That was about all they could cheer about, however, as Auburn dropped the series finale, 6-0. 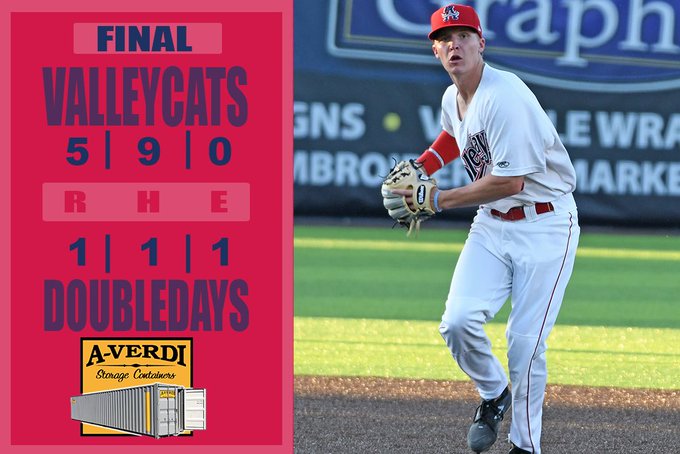 Though the Doubledays were 1-hit, that didn’t mean that there weren’t scoring opportunities throughout the game. Every starter, in fact, reached base. Tri-City pitching amazingly walked 11 batters and hit one more.

ValleyCats starter Manny Ramirez (no, not THAT Manny Ramirez) showed an electric fastball on the mound that consistently hit 95 MPH. But his wildness led him to walk eight batters in only 3.1 innings. The Doubledays actually scored first as Ramirez walked four batters in the first inning to give Jack Dunn an RBI.

Doubledays starter Evan Lee tied his season long in innings pitched with four but also surrendered his most runs of the season with three. He escaped the first inning unscathed after allowing a leadoff double, and initially dodged a bullet in the second when left fielder Landerson Pena gunned down the second baseman at home plate. But a double steal tied the game up at 1-1 when Luis Santana swiped home.

Lee allowed another solo run in the third after an RBI triple to Korey Lee and then allowed a leadoff home run to Bryan Arias to lead off the fourth. Another run followed after Luis Santana put himself in a pickle to allow the lead Tri-City runner to score.

Davis Moore took over for Lee in the fifth and had a run come home to score on a passed ball. Newcomer Lucas Knowles and Bobby Milacki, though, combined for four scoreless innings while allowing just one hit.

Blair Henley took over for Ramirez and dominated the Doubledays lineup, going 3.2 innings of hitless baseball while striking out five batters to lower his ERA to 0.44. Despite giving up the only hit of the game in the ninth, Peyton Plumlee tossed the final two innings for the ValleyCats while striking out one and walking one.

LISTEN: We got our ‍♂️ ‍♀️ ‍♂️ on in today’s ball game with 11 walks and a hit-by-pitch, but unfortunately it didn’t translate to the scoreboard. Take a listen back to a topsy-turvy ball game with @JDRaucci & @jack_mcmullen11. https://t.co/7GsMtI7YVu

The Doubledays will be back in action Monday to kick off their three-game series against the State College Spikes. Listen in on the action LIVE on FingerLakes1.com Radio.