For the second night in a row, the Doubledays were put in an early hole they were not able to climb out of. Auburn (18-27) fell to the Renegades (26-18), 8-3, as the team was unable to overcome an early Hudson Valley lead.

The Renegades hopped on the board with a commanding three-run lead in the first inning as Doubledays starter Carlos Romero struggled to find his groove. He walked his first batter then plunked the second, and a force out at second base advanced the lead runner to third. Jacson McGowan then singled in Hudson Valley’s first run, and a walk loaded the bases. Ben Troike kept the train rolling with a single of his own which, not only brought in the second run of the game, but kept the bases loaded for Mason Mallard, who brought in the third run with a sacrifice fly. 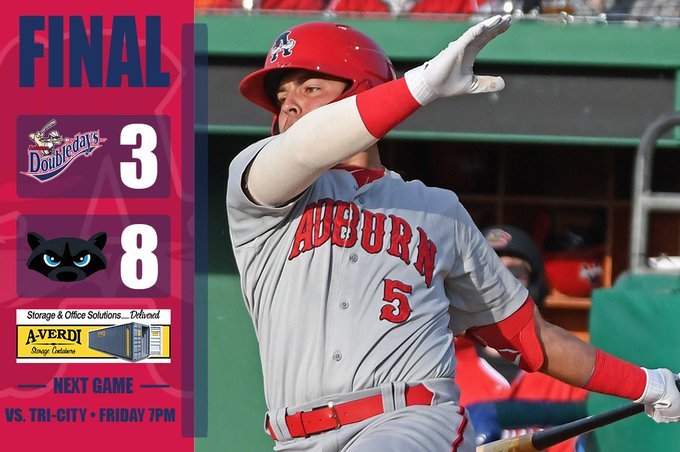 The Doubledays responded the following inning with a two-out rally started by a J.T. Arruda single. He stole second shortly thereafter, and was doubled home by Anthony Peroni. Arruda and Peroni connected again in the fourth with back-to-back doubles to bring in the second Auburn run of the night.

But Hudson Valley soon responded to the Doubledays’ pair of unanswered runs. A throwing error by Jack Dunn with a runner on and one out extended the Renegades’ lead to 4-2, and a double gave them back their three-run lead in the fifth inning.

Alfonso Hernandez took over for Romero on the mound to start the sixth but had an uncharacteristically rough outing. Singles by Mallard and K.V. Edwards put runners on first and second with one out, and another single by Garrett Hiott tacked on to the Renegades’ lead. A sacrifice fly and a double from Hill Alexander gave Hudson Valley an 8-2 lead.

The Doubledays’ bats were held silent after their solo run in the fourth, going down in order the next three innings. They were able to push across another run in the eighth inning on a Jose Sanchez groundout, but Renegades reliever Hector Figueroa was able to close the door to secure Hudson Valley’s 8-3 lead.

The Doubledays will be back in action Friday (first pitch at 7:00 PM) at home against the Tri-City ValleyCats. Listen LIVE on FingerLakes1.com Radio.