More than 200 anglers from throughout the Finger Lakes registered for the 49th annual Waterloo Rotary Carp Derby. It was the 11th year the Rotarians have sponsored the Carp Derby that was begun by the Grumpy Old Men of Seneca Falls in 1980.

Anglers from Palmyra, Elmira, Sodus, Clifton Springs and Manchester brought their catches to the weigh station on Oak Island. But in the end it was familiar anglers from Geneva, Waterloo and Seneca Falls who claimed the top spots on the leader board and more than $1000 in prize money. 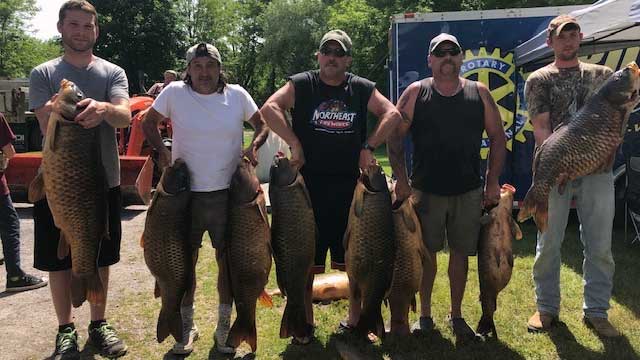 Jesse Tompkins of Geneva claimed the first prize of $500 with his 45.72 lbs. catch (pictured far right).

David Jansen of Clifton Springs proudly entered the smallest fish which weighed 0.7 pounds. It earned him $50.

Six early leaders’ fish tallied the same weight of 11.7 pounds. But that didn’t hold up as fishermen dragged strings of fish weighting more than 25 pounds each to the weigh station. Weighmasters Chris Shafer assisted anglers as they placed their fish in the large white laundry baskets on the scales. Three anglers tied with fish weighing 25.68 pounds but did not end up on the leader board at the end.

Rotary Past President Gina Suffredini thanked Waterloo Village for providing the truck and Seneca Meadows for accepting the fish after the derby. More than 400 fish were tossed into the bucket of Cassim Farm’s tractor to be loaded into the truck. The event was co-chaired by Kyle Black and Kathy Sigrist.. Black said 16 Rotarians assisted at the event.