With recent headlines gathering attention, WEOS.FM Station Manager of Finger Lakes Public Radio Greg Cotterill weighs in on Trump’s third annual barrage upon the institution of public access radio and the station’s prominence throughout the region.

When discussing the role of funding the Corporation for Public Broadcasting, “Trump may say things but Congress approves spending,” Cotterill said.

Cotterill says he attended a town hall event in a few years ago where he met with Rep. Tom Reed (R-NY 23), assuring him that he is “absolutely” in full support of public-access radio and television.

In an effort to connect and confirm with Reed’s office in Geneva regarding his stance on this issue, no official response was offered and it remains unclear whether he is still in support of National Public Radio and the Corporation for Public Broadcasting.

Aside from receiving a portion of their operating budget from the federal assistance, financial funding lies in multiple revenue streams: direct funding donations and matching, underwriting projects as well as local residents donating junk vehicles for tax write-offs. 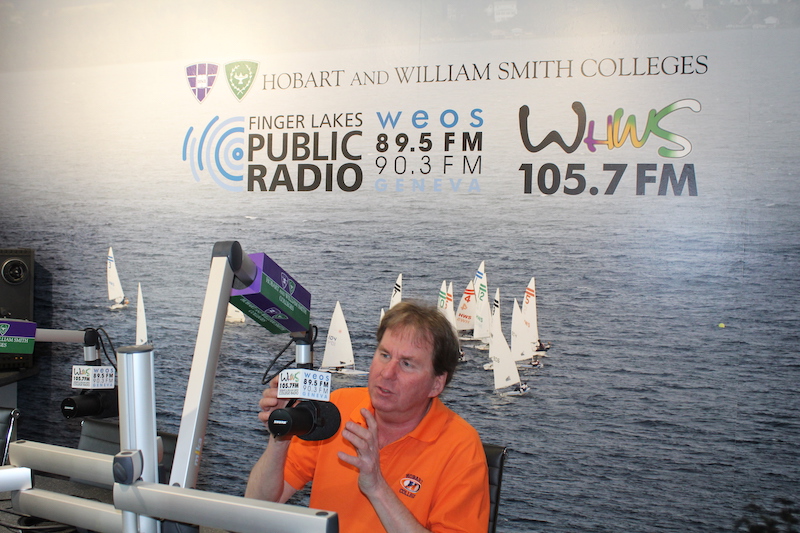 Wavelength station 89.7 MegaHertZs, which served as the original frequency for WEOS could barely stretch past Geneva and could not reach Rochester until the station increased its frequency to 89.5 MHzs.

An increase of 6,000 Watts resulted the station’s radio wavelengths extending to Canandaigua and throughout Ontario County as well as Rochester, downwards until Watkins Glen and even within the hills of Ithaca.

When it comes to Finger Lakes Public Radio, “It’s not just a name,” Cotterill stated.

A prominent show, “Stuck in the Psychedelic Era” with the Hermit is produced directly on turntables across the hall from WEOS inside Hobart and William Smith Colleges’ radio station, WHWS.FM While produced in the WHWS studio, this WEOS staple segment swiftly rose to relevancy; the Hermit’s thoroughly-researched and custom-created tracks captured the imagination of public radio listeners nationwide and even abroad.

In total, “Stuck in the Psychedelic Era” is broadcasted across 40-stations nationwide as well as one public radio station in New Zealand. The Hermit informs Cotterill about the constant and never-ending emails from dedicated fans of his show.

So much so that at one time many years ago, Cotterill remembered when the station would temporarily switch-off NPR’s flagship program, “All Things Considered” to conduct play-by-plays for the Hobart College Varsity Soccer game, reminiscing the countless number of angry phone calls that they received.

Local listeners tuned-in expecting to hear the ever-popular NPR exclusive show and instead got soccer analysis to the temporary frustration of residents until the college radio station was instituted shortly after.

In 1988, the HWS Colleges’ President, Carroll Brewster took the charge to create the WEOS platform to provide more consistent public radio programming as it was previously maintained by college students and community volunteers lacking a full-time staff and solidified organization structure.

Since then, WEOS has grown to become the most reliable NPR-affiliate station in the Finger Lakes.

For 16-years, Cotterill has maintained his status as the radio station manager of WEOS and WHWS, characterizing his role and position at both stations as the “pinnacle” of his career.

He is most motivated and passionate about working with young and inspiring students who seek to pursue careers in public radio upon graduating from HWS: the new crop and future of broadcasters, disc jockeys and public radio enthusiasts who one day will take on the responsibilities to advocate on behalf of National Public Radio and its affiliate stations spanning across the nation.