Cuomo works to lure Amazon back to New York

Gov. Andrew Cuomo and range of business, political and labor leaders are pushing for Amazon to reconsider its plan to back away from a project in New York that would have created 25,000 jobs tied to $3 billion in tax incentives. 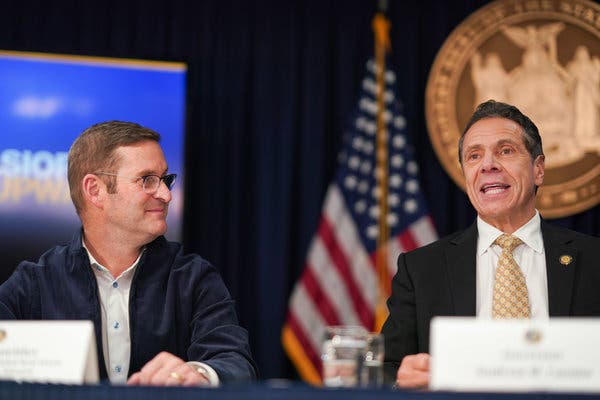 The business-backed Partnership for New York City in an open letter released Friday and addressed to Amazon CEO Jeff Bezos implored the company to move forward with the project, writing that Cuomo “will take personal responsibility for the project’s state approval.”

The letter, first reported by The New York Times, comes two weeks after Amazon announced it was pulling the plug on a planned expansion in Long Island City, Queens, amid opposition from elected officials and some labor union leaders.

“I’ve had many conversations with Amazon,” Cuomo told reporters on Long Island on Thursday. “I hope that they reconsider. Up until now, we haven’t seen any change in their position.”

The scuttled deal has led to a war of words between the governor and his fellow Democrats in the state Senate. Democrats nominated a prominent critic of the project, Sen. Mike Gianaris, to a board that would have veto power over it.

Democrats last week withdrew Gianaris from consideration and nominated Sen. Leroy Comrie. Cuomo in a radio interview with WAMC on Thursday morning complained that reporters had not asked Comrie about his position on the Amazon deal. Hours later, the letter to Bezos was made public.

“It would be helpful if the state Senate said they would approve it,” Cuomo said on Long Island.

The letter in large part appears meant to reset what had been an increasingly contentious debate over the project, despite public polls, including an independent survey by Siena College, showing broad statewide support for the proposal.

“We know the public debate that followed the announcement of the Long Island City project was rough and not very welcoming. Opinions are strong in New York—sometimes strident. We consider it part of the New York charm! But when we commit to a project as important as this, we figure out how to get it done in a way that works for everyone,” the letter stated.

It’s not clear, however, if Amazon would find a different location for its project or if the labor union opposition — driven by organizations like the RWDSU — would continue to press back against it. Amazon executives told elected officials they would oppose any effort to unionize its workers.

Cuomo last week lashed out at RWDSU for opposing the deal, claiming without evidence the union had sought to fund protests and demonstrations against the deal amid an effort to unionize workers at Whole Foods, a grocery chain the company purchased.

“I have always been clear that I support job creation and was disappointed with Amazon’s decision and hoped they would reconsider,” Senate Majority Leader Andrea Stewart-Cousins said in a statement. “I have also repeatedly indicated my willingness to work with Amazon in the best interests of our state and affected communities. It is clear that this process exposed serious flaws in our economic development programs that need to be reformed for future projects.”