Five Wayne-Finger Lakes teams were in action in re-scheduled semifinal sectional basketball games on Thursday night. Only two would advance through to Championship Weekend.

The Newark Reds were just 4.5 seconds away from seeing their season end Hornell Red Raiders. Newark possessed the ball, down 48-46, with time running down in the final period in front of an electric crowd at Penn Yan Academy. Reds senior Mason VanDeMortel rose to take the final shot from the elbow and was fouled. He calmly knocked down both free throws to send the game into overtime. Newark dominated the final period holding Hornell scoreless to secure the comeback victory and advance to the Section V Class B1 title game on Saturday morning at 9:00 AM at the Blue Cross Arena where they will face top seed Greece-Odyssey. 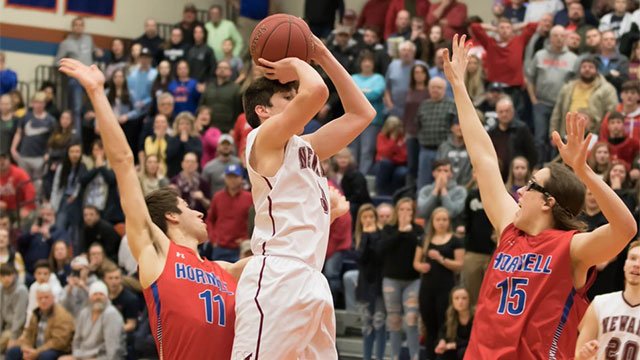 In the nightcap at Penn Yan, the Mynderse Academy Blue Devils struggled early, mustering a paltry 15 points in the first half, before eventually falling to Wayland-Cohocton, 63-65. The Blue Devils’ seniors Darren Miller & Sal Franzone saw their high school careers come to an end as Way-Co advanced to the B2 final where they will face Wellsville.

The Gananda Lady Blue Panthers cruised into the girls Class C1 final with a 36 point victory over Canisteo-Greenwood at Honeoye Falls-Lima. Other Wayne-Finger Lakes girls teams didn’t fare as well with East Rochester, Marion and Red Jacket bowing out of the tournament with semifinal losses on Thursday night.

FingerLakes1.com will bring you live coverage of Championship Weekend on Friday and Saturday. Get the full broadcast schedule below along with Thursday’s full results and updates brackets…

Jessica Rinere came into Thursday's Class AA semifinal scoring less than 4 points per game. She topped her average during an 11-2 run late in the second quarter. The junior guard was just getting started. @ShamboPeter @mvogtpenfield https://t.co/xUTbparTO5

On to the Sectional Final for Gananda Girls Basketball. Game will be versus Avon on Saturday at Victor, 3pm. @WeAreGananda #GanandaProud

•Dragons hang on to win a close one. Pembroke will meet Geneseo in the Class C2 Final#SectionV #GirlsBasketball pic.twitter.com/AW3CLld43t

WE’RE GOING TO THE BIG HOUSE!! Reds pull off an UNBELIEVABLE comeback to beat Hornell 59-48 in OT. The Reds will take on Greece Odyssey on Saturday at 9:00am (yes, morning) #GoReds @secvbbasketball pic.twitter.com/lrJdwkuerO

Less than 26 hours. @CalMumHoops vs. York. Here's what you need to know: https://t.co/fihAUNfSsf