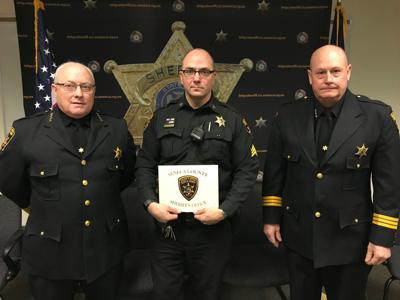 The ceremony was held to honor notable achievements during the past year. Undersheriff John Cleere said Strohm was chosen for service and dedication in all areas of law enforcement, such as leading the narcotics division and assignments in criminal investigations.

Strohm also was recognized for saving the life of a young woman who nearly drowned in a boating accident last May on Seneca Lake. Strohm was off duty at the time.

“Your tireless efforts and positive attitude are in the finest tradition of law enforcement and have made you an asset to the office of sheriff and the citizens of Seneca County,” Cleere told Strohm.

Two people who live near the site of the boat accident were given commendation awards by Chris Fallon, director of the Bureau of Marine Services for New York State Parks. The bureau oversees the state office for boating safety.

Fallon said George Gedon and Lou Grinzo, along with their wives, heard screams for help and responded to rescue three young women who were in the water late at night. Strohm performed CPR on one of the women.

“Thanks to the heroic efforts of the Gedons and Grinzos, as well as everyone else involved in this rescue, all three victims — two of whom came perilously close to losing their lives — are alive,” Fallon said.

Sgt. Richard Reed received the sheriff’s office Distinguished Service Award for his work following the devastating flood that hit the south end of the county in August. Cleere said due to a recent loss of personnel, there was no experienced emergency management director at the time.