The NYSGA’s 17 annual state championships, conducted at 9 member clubs around New York each summer, is again filled with a diverse group of historic, exceptional venues.

The 97th edition of the NYSGA’s flagship event, the NYS Men’s Amateur Championship, will be contested at Crag Burn Golf Club in East Aurora, August 6 – 8. This Robert Trent Jones, Sr. design, built in 1972, recently hosted the NYS Men’s Senior Amateur in 2017. Additionally, the club opened its arms to the Men’s Mid-Amateur three times in 1986, 1999 and 2010. 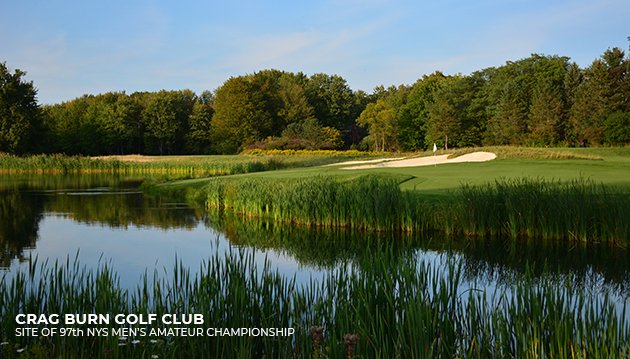 Two more premier state titles are headed to Buffalo this season, including the 90th NYS Women’s Amateur & 11th Mid-Amateur Championships, which will both be conducted at Lancaster Country Club, July 9 – 11. The course, designed by Charles Nieman in 1927, hosted the Men’s Amateur in 1965 and the Boys’ Junior & Sub-Junior Amateurs in 1968 and 1976.

The 2019 NYS Boys’ & Girls’ Junior Amateur Championships will return to Seven Oaks Golf Club in Hamilton, for the tournament’s fourth consecutive year, July 23 – 24. The Colgate University course designed by Robert Trent Jones, Sr. in the late 1950’s, has hosted numerous NYSGA championships over the decades including the Girls’ Juniors in 1967, 1975, and 1988, the Boys’ Junior & Sub-Junior in 1971 and 1978 (before the three junior championships were combined in 1998), the Women’s Amateur & Mid-Amateur in 1983, and two Men’s Amateurs in 1993 and 2001. The course has hosted sixteen state junior tournaments overall since 1967.

The 36th NYS Men’s Mid-Amateur Championship will be contested at Tuscarora Golf Club in Marcellus, September 27 – 29. The 1923 Seymour Dunn design with Robert Trent Jones, Sr. flare, held the NYS Women’s Amateur & Mid-Amateur in 1991 and 2015. It also hosted the Boys’ Junior, Sub-Junior and Girls’ Junior in 2003.

The 67th NYS Women’s Senior Amateur & 13th Super Senior Amateur Championships will be played at Bristol Harbour Golf Club in Canandaigua. This is the third time the 1972 Robert Trent Jones, Sr. venue will host the championship, with past contests in 1981 and 1990. The course also hosted the 1991 Boys’ Junior & Sub-Junior, and 1992 Men’s Mid-Amateur.

The 2nd NYS Women’s Amateur & Senior Amateur Four-Ball Championships will be conducted at Ravenwood Golf Club in Victor, June 23. The Rochester-area club hosted the inaugural NYS Men’s Four-Ball in 2011 and again in 2012. The club also hosted two Men’s Amateur tournaments in 2003 and 2009. The course was constructed in 2002.

The NYSGA would like to thank the leadership and staff at each of this year’s host clubs for their support of the association and in helping continue the tradition of great amateur golf in New York State.

Tournament registration is set to open on February 15, 2019 via Tournament Management powered by Golf Genius Software (replaced TPP). Those who still have not created a player account in Golf Genius, will have to create one prior to registering for an NYSGA event.