In 2021, DEC Forest Rangers conducted 426 search and rescue missions, extinguished wildfires, participated in prescribed fires that served to rejuvenate hundreds of acres of land, and worked on cases that resulted in thousands of tickets or arrests.

“Over the last decade, as well as during the COVID-19 pandemic, DEC saw an increase in people visiting State lands to experience New York’s abundant opportunities for outdoor recreation,” said DEC Commissioner Basil Seggos. “DEC’s Forest Rangers continue to be on the front lines to help visitors get outside responsibly and get home safely, as well as to protect our state’s irreplaceable natural resources. Rangers’ knowledge of first aid, land navigation, and technical rescue techniques are critical to the success of their missions, which for more than a century have taken them from remote wilderness areas with rugged mountain peaks, to white water rivers, and throughout our vast forests statewide.”

Town of Walkill
Orange County
Wilderness Search:
On June 6, Forest Rangers were called to help in the search for a 26-year-old whose family was concerned about his welfare after the subject left a rehabilitation facility near Crystal Run Road in Middletown. Ranger Captain Tyrrell, and Rangers Cowart, Jahn, and Parlier searched the area. A short time later, Rangers found the subject in the woods, uninjured. Rangers walked him out of the woods and turned the subject over to Walkill Police.

Town of Wilmington
Essex County
End of Watch: On June 9, hundreds of people paid their respects at a memorial for Forest Ranger Captain Christopher Kostoss. Captain Kostoss died by suicide on May 31. He served as a Ranger for 23 years and was involved in countless search and rescue missions. Commissioner Basil Seggos described him as “a tireless advocate for mental health awareness, particularly among his fellow Rangers. His death is a painful reminder of the critical need to promote wellness and destigmatize issues surrounding mental health that prevent individuals from seeking treatment.” Kostoss was 49 years old. 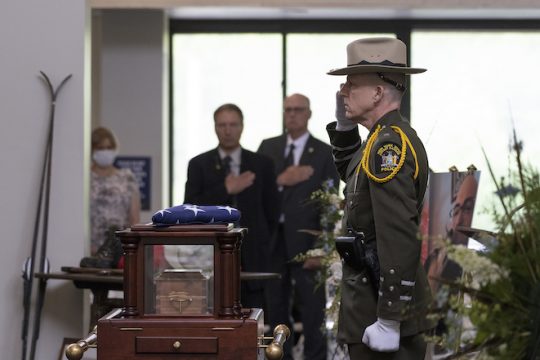 Village of Catskill
Greene County
Wilderness Rescue: On June 9 at 5:40 p.m., Forest Rangers Fox and Gullen responded to a report of a 65-year-old hiker from Oneonta with an unstable leg injury on the Poet’s Ledge Trail in Kaaterskill Wild Forest. Rangers found the subject approximately two miles up the trail and splinted his right knee. With the aid of crutches, the Rangers helped the hiker down the trail until they were met by Rangers Allwine and Dawson with a litter to carry the hiker out to their UTV. The group reached the trailhead at 11:53 p.m., and the hiker declined further medical attention.

Town of Hunter, Villages of Honeoye Falls and Sherburne
Chenango, Greene, and Monroe Counties
Public Outreach: On June 11, DEC in partnership with the Office for People with Developmental Disabilities (OPWDD) and the New York State Division of Veterans’ Services, hosted a free event to connect people to nature and provide increased access to the outdoors. ‘Get Outdoors and Get Together Day’ brings people of all abilities, ages, identities, and backgrounds together for fun and healthy activities on State lands. Forest Ranger Lieutenant Wickens attended the event at Mendon Ponds Park in Monroe County with DEC staff to help coordinate efforts, educate the public about the duties of a Forest Ranger, and answer questions.

Rangers Lunt and Murphy participated in Get Outdoors and Get Together Day at the Rogers Environmental Education Center in Sherburne. The exhibit included an airboat and other water rescue equipment. The Rangers led a throw bag challenge where kids could learn how to use a water rescue throw bag and attempt to throw the bag to a target simulating a distressed swimmer.

Ranger Lieutenant Pachan participated in the Get Outdoors and Get Together Day at North-South Lake Campground. The campground exhibit included a Ranger’s “tools of the trade,” so visitors could learn about a Forest Ranger’s responsibilities and how to recreate safely and responsibly. 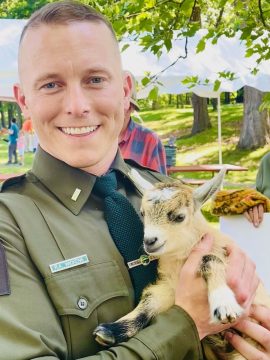 Get Outdoors and Get Together Day in Honeoye Falls 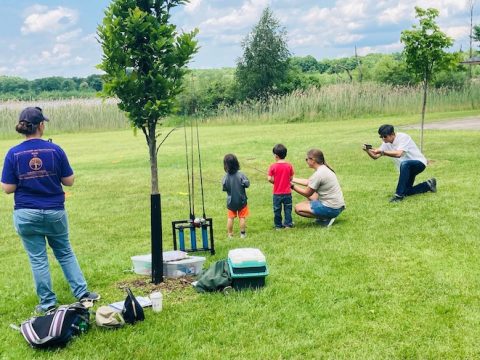 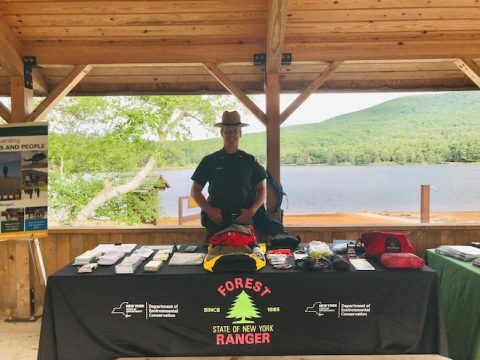 Town of Webb
Herkimer County
Rope Rescue Training: On June 12, Forest Ranger Lt. Hoag, Ranger McCartney, and Assistant Ranger Bolton conducted rope rescue training with Old Forge Fire Department at Bald Mountain. Forest Rangers and Fire Department members reviewed patient packaging with a wheeled litter, anchor systems, and the setup of a component-based system for low-angle rescues. The training allowed 10 Junior Firefighters to get signed off to assist with rope rescues that commonly occur along the trail to the Bald Mountain Fire Tower. This joint training allows personnel to become familiar with equipment utilized by both agencies to undertake rescues together. 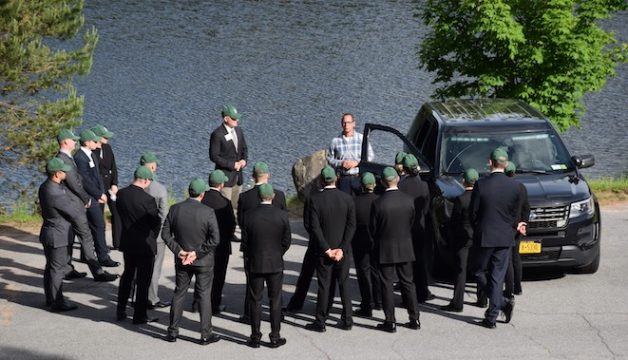