Disney+ recently created a series and has now partnered to create a Kellogg’s Frosted Flakes version of the cereal. 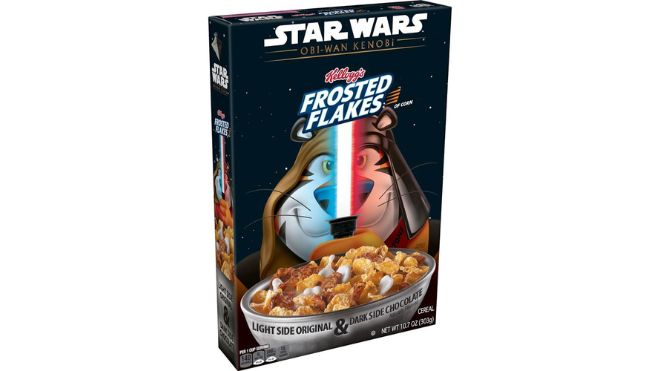 The announcement was made on May 4, 2022 regarding the cereal made for Star Wars fans.

The breakfast option will start hitting shelves across the nation sometime in July.


Do you love Dollar Tree? Here are 10 of the best and worst things to buy

According to The Sun, the cereal is made with both chocolate and regular frosted flakes as a way to pair light and dark.

The cereal box even has Tony the Tiger wearing both Obi-Wan Kenobi and Darth Vader attire.

An exclusive mystery box was available for purchase to fans in June on Walmart.com.

The release on the latest Disney+ hit was May 27, 2022 and had some of fans Star Wars favorites.

The plot surrounds Obi-Wan Kenobi’s journey as he handles the downfall of Anakin Skywalker who later turns to Darth Vader.

Where to watch Obi-Wan Kenobi

You can stream the series on Disney+, and new episodes are loaded onto the streaming service on Wednesdays.

You have the option of bundling Hulu and ESPN+ with the service for $13.99 per month.