The student theatre group will perform “Radio Ridiculous,” a full-length stage show based on madcap comedic radio programs from the first half of the 20th Century. Performances are scheduled for 7:30 p.m. from March 24 to March 26 and March 31 to April 2.

Harlequin Productions Director Bob Frame said the show captures the humor of the radio era while still being respectful of its short- and long-term cultural contributions. 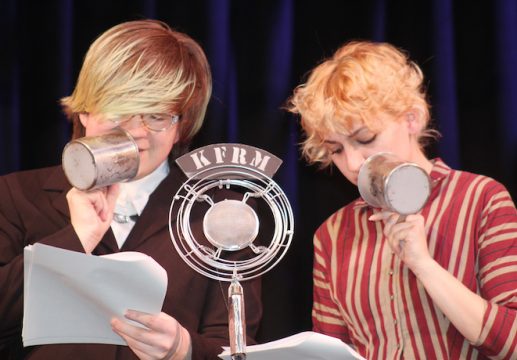 Cayuga students Tessa Higgins and Kyleigh Walton perform as radio actors in “Sorry, You’ve Got My Wrong Number.” The show is part of Harlequin Productions’ spring performance of “Radio Ridiculous,” which will be performed at the College’s Auburn Campus March 24 to March 26 and March 31 to April 2.

“There’s definitely laughs throughout the entire show, but it also pays homage to what those shows offered listeners in that era, and the impact they had,” he said. “It’s a great combination of humor and reverence, in a show that allows our student-actors to learn some new acting styles.”

The show is built around three storylines, including a Marx Brothers tribute entitled “The Wacko Brothers Show” highlighting two siblings creating chaos with whoever they contact. The other shows are a comedic take on “A Tale of Two Cities” and “Les Miserables” dubbed a “Tale of Two Miserables,” which features a man imprisoned for stealing pumpernickel, and a murder-mystery titled “Sorry, You’ve Got My Wrong Number.”

The biggest challenge, said Frame, was for students to learn a new acting technique. Traditional shows combine physical acting and vocal delivery, but performances in “Radio Ridiculous” are built entirely on vocal dexterity. 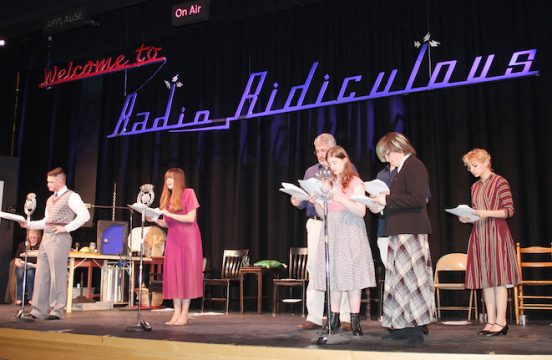 The cast of Harlequin Productions performs “Tale of Two Miserables,” part of the theatre group’s spring show “Radio Ridiculous.” Shows are scheduled for the College’s Auburn Campus March 24 to March 26 and March 31 to April 2.

“Except for the fact that the students are on-stage, it’s almost completely voice acting with some live sound effects. It requires an exaggerated way of speaking, which is quite a change. They’ve adapted well to the style, though, and are enjoying the challenge,” said Frame.

Tickets are available for purchase at the door, with a reduced fee for students. For more information about Harlequin Productions, visit  https://www.cayuga-cc.edu/students/student-life/harlequin/.