The City of Geneva City Council voted to table the Private Landlord Registration ordinance last night, with a split board decision. Councilors Regan, Camera, Salamendra, and Salone all voted against the tabling of this measure, with Mayor Valentino and Councilors Gaglianese, Burrell, Peeler, and Noone voting for postponing the ordinance proposal.

The Private Landlord Registration outlines the City’s attempt to collect information from landlords to communicate between the municipality, tenants, and landlords when issues arise. A proposed registration fee of $50 for units with four or fewer dwellings and $100 for units with more than five would be applied. Landlords would be responsible for providing contact information and living or having a property manager live within 20 miles of the City.

John Salone, who attended his first meeting as the representative for Ward 6 last night, said that the measure would create better housing and benefit the tenants in Wards 5 and 6. These tenants have issues contacting their landlords or having repairs completed, more so in their Wards than the other Wards in the City.

Mayor Valentino stated that it makes good sense to hold landlords accountable, but there should also be a positive point system recognizing those landlords who comply with measures.

“There are a lot of holes to fill…but it will be a benefit to all parties,” said Gaglianese, who stated that he was in favor of getting the ball rolling but then opted to table the measure. Counselor Burrell, who seconded the motion to table the issue, asked if the registry would also include commercial landlords and was informed that it would.

The matter will appear on the agenda for next month. Still, Valentino encouraged if any input or changes are needed to provide recommendations to staff, legal and other councilors for review.

James Petropoulos was voted in by Council last night to represent Wards 5 and 6 on the Ontario County Supervisors Board. Councilors Regan and Salamandra opposed the nomination. 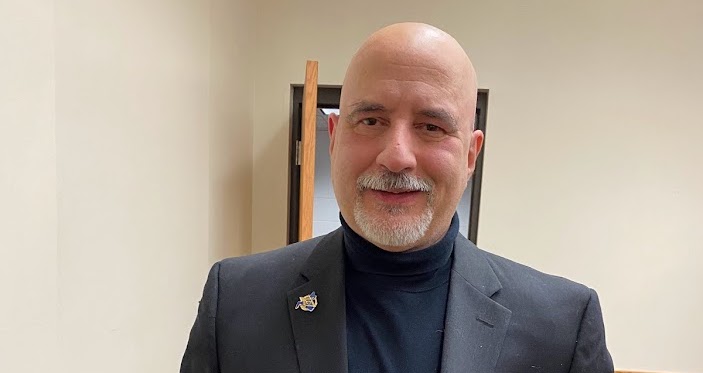 James Petropoulos, who will serve on the Ontario County Board of Supervisors, representing part of the city of Geneva.

Councilors expressed their desires to have a City Planner or Director of Planning for Economic Development, along with a hired grant writer.

The 20 person City Manager Search Committee will be meeting on March 21, with each individual bringing their insights from the applications turned in on February 18. The Committee will narrow the list before Zoom interviews, and personal interviews commence.

The Council unanimously passed the ordinance to provide for a 30-foot parking setback on North Main Street. This measure will assist with visibility and turn onto North Main from Patterson Alley safely but will require removing one parking space.

The council continues to examine the City’s codes and ordinances regarding solid waste pickup. Currently, four licenses are given annually for residential and commercial pickups.

Councilor Gaglianese stated that competition is healthy, potentially driving prices down. Regardless of how many licenses the City gives, the same amount of wear and tear on the roads will occur. Council Pealer stated that he was in the middle of the road on this issue and that he was open to offering more permits in baby steps, noting that trash collection is a public health and sanitation issue.

Councils Camera and Regan fell on the opposite opinion, stating that one of the reasons the permits are issued is because “every day is trash day” in Geneva. Regan echoed, stating that Council needed to discuss what they wanted first and then ask haulers to comply. Specifically, she noted the structure for recycling and compost hauling. Councilor Burrel then echoed Regan’s points.

Councilor Noone focused more on the trash collection downtown, stating that the City needed to play a bigger role and that large debris removal needs to be more accessible to residents.

Council resolved to establish a public hearing on April 6, 2022, on creating staggered terms.

The intent is to ensure that all Councilors and the Mayor do not go up for election all simultaneously. The original draft of the resolution staggers the Mayor and Councilor at Large for two-year terms, Councilors in Wards 1, 3, and 5 for a three-year term, and Councilors 2, 4, and 6 for a four-year term. There was some question on how that would play out and whether residents would be at the polls every year to elect City officials. There are some details to work out regarding how to stagger the terms, but for now, Council has established the public hearing on this matter.

Developmental Services Manager Neal Braman presented information to the Council on the latest measures of the building located at 29 Linden Street. There has been an approved plan for railing installation in the alley, the facade to be painted, to fix the first-floor ceiling, and to have the lot cleaned up before the end of April. Counselors expressed their frustration with the project.

The Green Committee is working collaboratively for an event on April 30 that will celebrate Arbor Day and Earth Day together. This event, called “Mission Zero,” will be held at the Geneva Community Center and will offer activities and educational activities regarding sustainability for residents.

Residents can signup now for adult co-ed soccer and men’s box lacrosse, which will begin the first week of April.