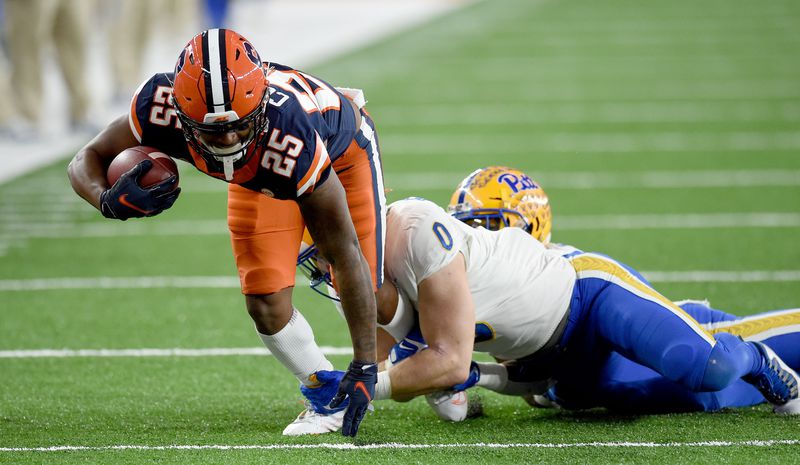 In a high-stakes home finale, a small cheering section of fans dressed in blue and yellow belted out a discernible chant that bounced off mostly empty metal bleachers and walls inside the Carrier Dome.

The visitors dotting the sparse crowd here have had a lot more to cheer about this season than the ones dressed in orange. Those who joined in on the “Let’s go Pitt!” chant are headed south next week for the ACC Championship Game.

Syracuse needed a win to extend its season and earn a bowl game after a one-win horror show last fall, but the atmosphere felt the same as many meaningless November football games played here so often over the years.

Granted it was a holiday weekend, and the students that showed up in droves throughout the season were on break. But in the most meaningful home game of the season, against perhaps the best opponent it will face this season, a lot of folks decided it wasn’t worth their time and money.

Such a reality follows this program and coaching staff into another offseason after a 31-14 loss to No. 17 Pittsburgh capped a 5-7 season, the fifth losing season in Dino Babers’ six years as head coach and the program’s seventh in nine seasons since starting ACC play.

Final from the Dome.

Thank you for your support all season long. pic.twitter.com/hmwl2co9u1

Shrader to Courtney Jackson for his second TD of the night! pic.twitter.com/G6kXjsE9pn

Airon Servais has played both tackle spots and center in his run and been nothing but consistent.#ThankYouSeniors pic.twitter.com/KbrdEmbzY9

Syracuse closes out the 2021 regular season on Saturday with one of its toughest tests of the year when it hosts No. 20 Pittsburgh at 7:30 p.m. in the Carrier Dome. A win sends the Orange to a bowl game for the first time since 2018.

This is the 77th meeting between Syracuse and Pitt, making the Panthers the Orange’s most frequent opponent. The teams have played annually since 1955, in a series that dates back to 1916. Pitt leads the all-time series 41-32-3.

Last ride in the Dome this season.