The Solar Home Factory has been awarded a million dollar grant from Empire State Development and $1 million in Excelsior Jobs Program Tax Credit towards their expansion at 33 Forge Avenue in Geneva. The 108,000 sq-ft. expansion will require the hiring and training of over 100 new workers.

The company plans to break ground on the new facility in the Fall of 2022.

Tracey Wallace, the company’s CFO, says the company is now focusing exclusively on multifamily developments instead of the small homes it is known for. “There is a real housing need in the Finger Lakes as well as across New York state. By focusing on larger developments we can have a greater impact on the problem,” she said.

The total cost of the expansion is $21M with $17M coming from private sources.

The expanded factory will produce housing modules that are fully completed inside, including electrical, plumbing, drywall, flooring, cabinetry and appliances. These units are then trucked to sites across the region and stacked with a crane.

Marc Rodriguez, VP of Construction, says every apartment the factory produces will be Net Zero energy use, meaning it will produce as much energy as it uses over a year. “These are high quality living spaces that come together to form high performance buildings,” he said. 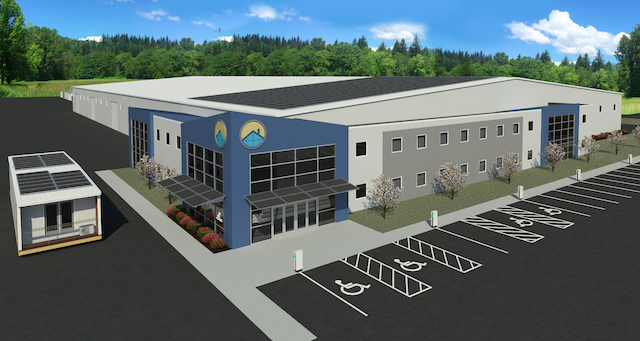 The manufacturing process, called Volumetric Modular, is something the company is very familiar with, having produced its last development in the same fashion. Rodriguez says the new factory will allow the company to scale-up the process in a big way. “This is the evolution of construction and the only way to construct affordable housing in an era of high material prices and a shortage of labor,” he added.

The factory will eventually be able to produce a complete apartment every 4 hours of operation.

Governor Hochul announced the grant and tax credit awards on Monday as part of $81 million awarded to support 97 priority projects across New York State through the Regional Economic Development Council initiative. “The pandemic toll touched every corner of the state and every sector of New York’s economy, and as a result we must ensure that our recovery does the same,” Governor Hochul said. “As we move forward from the pandemic we are using the rolling grant process to build New York State back better by supporting shovel-ready projects with the potential to accelerate new investments and catalyze economic growth in every community.”

Empire State Development Acting Commissioner and President & CEO-designate Hope Knight said, “The COVID pandemic has had a devastating impact on our state, and this is especially true for the businesses and organizations that are the foundation of our economy.

The Regional Economic Development Councils, made up of people who know their own communities best, have recommended innovative projects that will help their regions rebuild, and reemerge stronger and smarter for the future.”

This initial round of priority projects was recommended by each Regional Council because of their project readiness and alignment with each region’s strategic plan.