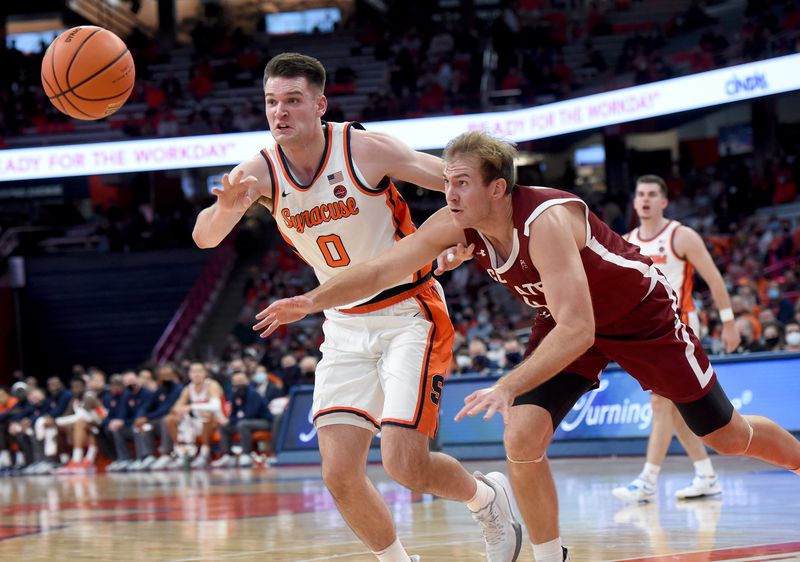 Syracuse’s 50-year winning streak against Colgate came to a shocking end on Saturday.

Syracuse had beaten its Upstate New York neighbor 54 consecutive times with Colgate’s last win over the Orange coming in the 1961-62 season.

When Syracuse ran out to an early 17-2 lead over the Raiders, win No. 55 in the streak seemed all but assured.

But Colgate, which had missed its first 12 shots from the 3-point arc, rallied to take a halftime lead and then went on to hand Syracuse a stunning 100-85 loss at the Carrier Dome on Saturday.

Colgate’s last win over Syracuse before Saturday was a 67-63 win on Feb. 24, 1962. Syracuse coach Jim Boeheim was a senior at Lyons High School.

Jack Ferguson led Colgate with 25 points on 6-for-13 shooting from 3-point range. As a team, the Raiders made 18 out of 43 3-point shots despite missing their first 12 attempts from outside the 3-point line. Nelly Cummings scored 18 points for the Raiders.

Syracuse fell to 2-1 with the loss, while Colgate improved to 3-2.

One we'll learn from. pic.twitter.com/gIWMCQC9my

Syracuse loses a buy game to Colgate. The epitome of brutality.

Syracuse basketball falls to Colgate by a score of 100-85. It is Colgate’s first win over Syracuse since Jim Boeheim was a freshman at SU and John F. Kennedy was President of the United States in 1962.

Brutal day to be a Syracuse fan

SU Football is getting torched by NC State 38-17 pic.twitter.com/INHU6Bn0ZX

Syracuse (2-0) hosts its most familiar foe when it welcomes Central New York rival Colgate (2-2) to the Dome on Saturday, Nov. 20. Tipoff is scheduled for 5:00 p.m.

Syracuse and Colgate have matched up 172 times, the most the Orange have ever faced an opponent. In those clashes, Syracuse holds a 127-45 record and has not lost since 1962, good for 54 straight victories. The two court combatants had played in 27 consecutive seasons before last year’s scheduled encounter was cancelled because of the pandemic.

Back at it in the Dome today! pic.twitter.com/ni63X1uZep

Time to check in! Where you watching from today?#OrangeNation ? pic.twitter.com/7lDAuoAQd4

The starting 5 vs. Colgate: