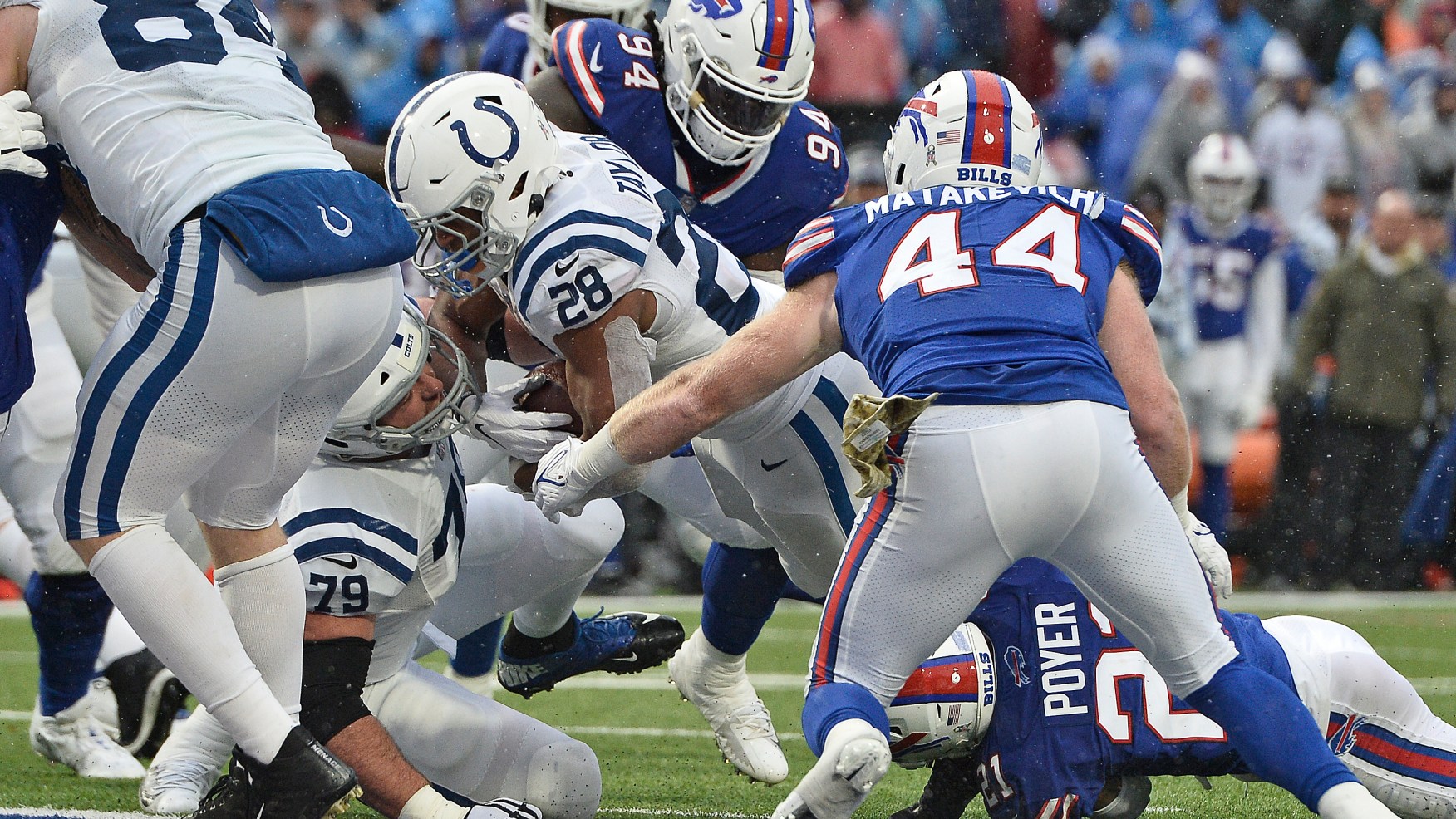 With a cold, steady rain coming down at Highmark Stadium on Sunday afternoon, the Indianapolis Colts brought the heat in the form of running back Jonathan Taylor who rushed all over the Bills defense in the Colts’ 41-15 win over Buffalo.

The first half has not been kind to the Bills ever since the bye week, but on Sunday, it wasn’t only the Buffalo offense that was struggling.

Nothing went right on either side of the ball for the Bills in this one. Allen and the offense couldn’t get on the same page, with the $258M quarterback having his worst outing of the season. Allen would finish the game 21 of 35 for 209 yards, two TDs and two interceptions. He completed just seven passes in the second half.

Along with the rough offensive performance, the Buffalo defense could not stop Taylor, who ran for an impressive 185 yards and had a hand in 5 touchdowns, four rushing and one TD catch. Prior to the Colts game, the Bills defense had only given up an average of 83 yards per game on the ground.

Coach McDermott: Our fundamentals have to be better. We turned the ball over four times today and it’s tough to win football games when you lose the turnover battle. #INDvsBUF pic.twitter.com/J2cG9WP4Na

QB Josh Allen: I have a lot of trust and faith in this team. How we played today is not who we are. #BillsMafia pic.twitter.com/dKUd6Rglku

We're live for Bills Tonight with comments from HC Sean McDermott, QB Josh Allen and more after our loss to the Colts. #INDvsBUF https://t.co/Qq8U6qQUv9

Second touchdown of the day for Diggs!

Caron Wentz has 106 yards passing. The Colts have scored 41 points.

When the conditions are at play – rain, snow, wind, etc. – and you can't play a physical brand of football… and I don't even mean simply running the ball, just at the LOS… you're going to struggle. The Bills are a soft football team. I think that's just reality. Not bad, soft

The #Bills haven't won back to back games in over a month, just inexcusable with their talent.

Here's Sean McDermott on not stopping the run: "We’ve got to get that fixed. There’s a formula to win and there’s a formula on the other end of it too. And when you’re giving up… when we’re getting beat at the point of attack, obviously, I have to do a better job there."

Sean McDermott when asked about COVID issues forcing the Bills to be without Star Lotulelei and Spencer Brown today: "Again, I respect those guys decisions, and I want to talk about the guys that were here."

“Think it goes into the category of flush.” – Dion Dawkins#Bills

Dawson Knox: "We've seen how resilient we are. We've got the parts we need to succeed. You learn a lot from games like these. I think it's good to have a game coming up quick to get this bad taste out of our mouths."

Nobody had that on their bingo cards 10 games into the season. https://t.co/TfOPHW4EKg

I'm starting to think #Sabres-Calgary was a better matchup than #Bills-Indy.

The #Bills had 13 rushing attempts today. That's the fewest in any game under Sean McDermott.

This better be a wake up call for my @BuffaloBills. We lost the line of scrimmage today on both sides of the ball. Better to learn this lesson now then in January. #INDvsBUF

McDermott: I’m confident in Isaiah as a returner but as a team we have to take better care of the football. Hard to win not taking care of the ball. #Bills

Micah Hyde says the Bills are very disappointed. Said media knows all the answers to the questions that are coming. Have to stop run. Didn’t put Wentz in tough situations. “They have a good run game and we weren’t able to stop it.”

In the last two weeks the Bills and the Colts have both played the Jets and the Jaguars. The Colts won both matchups, while the Bills split. The two play each other in Week 11 as they face off for the first time since Buffalo beat them in the Wild Card round of the playoffs last season.

#RoundingUpTheHerd: Since becoming a member of the @buffalobills in 2020, @stefondiggs leads the #NFL in both receptions (183) and receiving yards (2,285). #BillsMafia pic.twitter.com/8CV0HW2hex