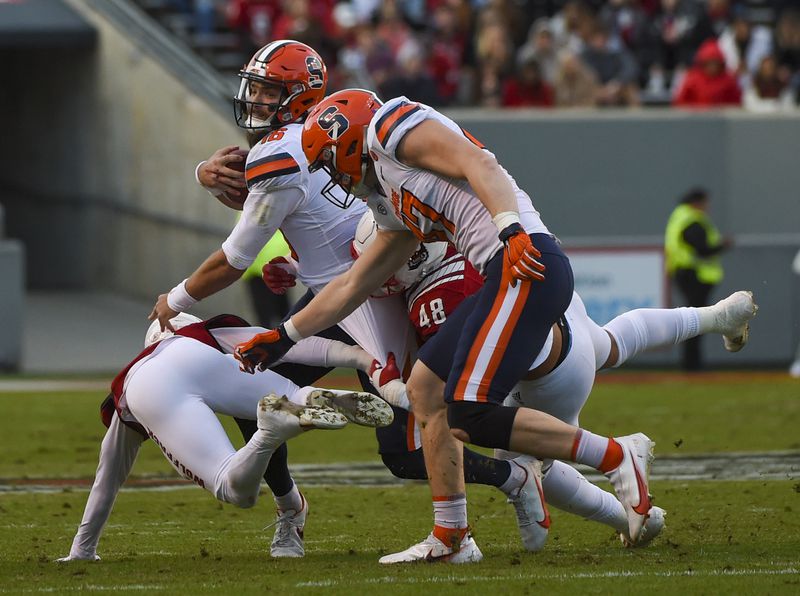 Three huge plays went NC State’s way and that was enough to knock off Syracuse 41-17 on Saturday. Despite Sean Tucker setting Syracuse’s single season rushing record and having a strong game, the Orange struggled to consistently move the ball. Then, defensive and special teams touchdowns gave NC State enough of a cushion to cruise to victory.

Trailing 7-0 in the second quarter, Syracuse quarterback Garrett Shrader tried to connect on a slant over the middle. NC State linebacker Drake Thomas jumped in front of the pass, picked it off and took it all the way to the end zone for a pick six. Tucker would answer with a 55-yard touchdown run, but the Wolfpack would return the ensuing kickoff for a touchdown to push the lead back to two scores.

A long pass play would then set up a late first half touchdown to expand NC State’s lead to 28-7 at the half. The Wolfpack would coast for the remainder of the game as Syracuse would not seriously threaten the rest of the way.

Back in the Dome next Saturday. pic.twitter.com/b2mPTPhMpV

The last outing for the Syracuse football team wasn’t what head coach Dino Babers expects of his program. They’ll get an opportunity to rebound with another road game against No. 25 NC State on Saturday.

“I think the biggest thing is we have to get back to playing Syracuse football,” Babers said in his weekly press conference on Monday. “That’s not what we played Saturday. It’s not indicative of what we’re trying to represent. We were very flat. And we weren’t physical. And those things truly bother me. It should bother everyone that was in this room on Sunday. So we are looking forward to seeing if we can change people’s opinions of the last time we were out on the football field.”

The Orange had their two-game winning streak snapped with the game put away early in Louisville. The offense mustered just three points, while the defense was gashed for a touchdown on Louisville’s first-four possessions.

“Not enough fight, not enough struggle, not enough clawing and scratching,” Babers said when asked about the offense’s struggle. “There’s a physicality to this game that you have to match. If you’re not going to play physical, it’s going to be very, very hard to win no matter what style of football you play.”

Syracuse will face a team Saturday that is undefeated at home. NC State is a perfect 5-0 at Carter-Finley Stadium, including 2-0 versus ACC opponents. The Wolfpack have the third-ranked defense in the ACC and their rushing defense ranks 11th nationally, allowing 102.1 yards on the ground per game. On the offensive side of the ball, Devin Leary ranks as one of the top quarterbacks in the ACC and in the nation. He has thrown for 2,883 yards this season and 29 touchdowns. He is a top-10 finalist for the Johnny Unitas Award.

“We’re excited to get an opportunity to play NC State,” Syracuse head coach Dino Babers said. “Obviously, we’re disappointed about what happened last week. (NC State head coach) Dave Doeren has a fantastic football team. They are coming off a close loss to Wake Forest, a team that we played close, extremely close, as well. We understand it’s going to be a difficult venue to play in. We’ve been there before – we understand that. But we’re looking forward to having an opportunity to put this football team back out front and see if we can change the narrative from what happened the previous week.”

Cuse enters the game at 5-5, seeking an all important sixth win.

Looking ahead to our next challenge.

Saturday's game at NC State will be a 4 p.m. kick on ACC Network. pic.twitter.com/bbYoQwqWKU