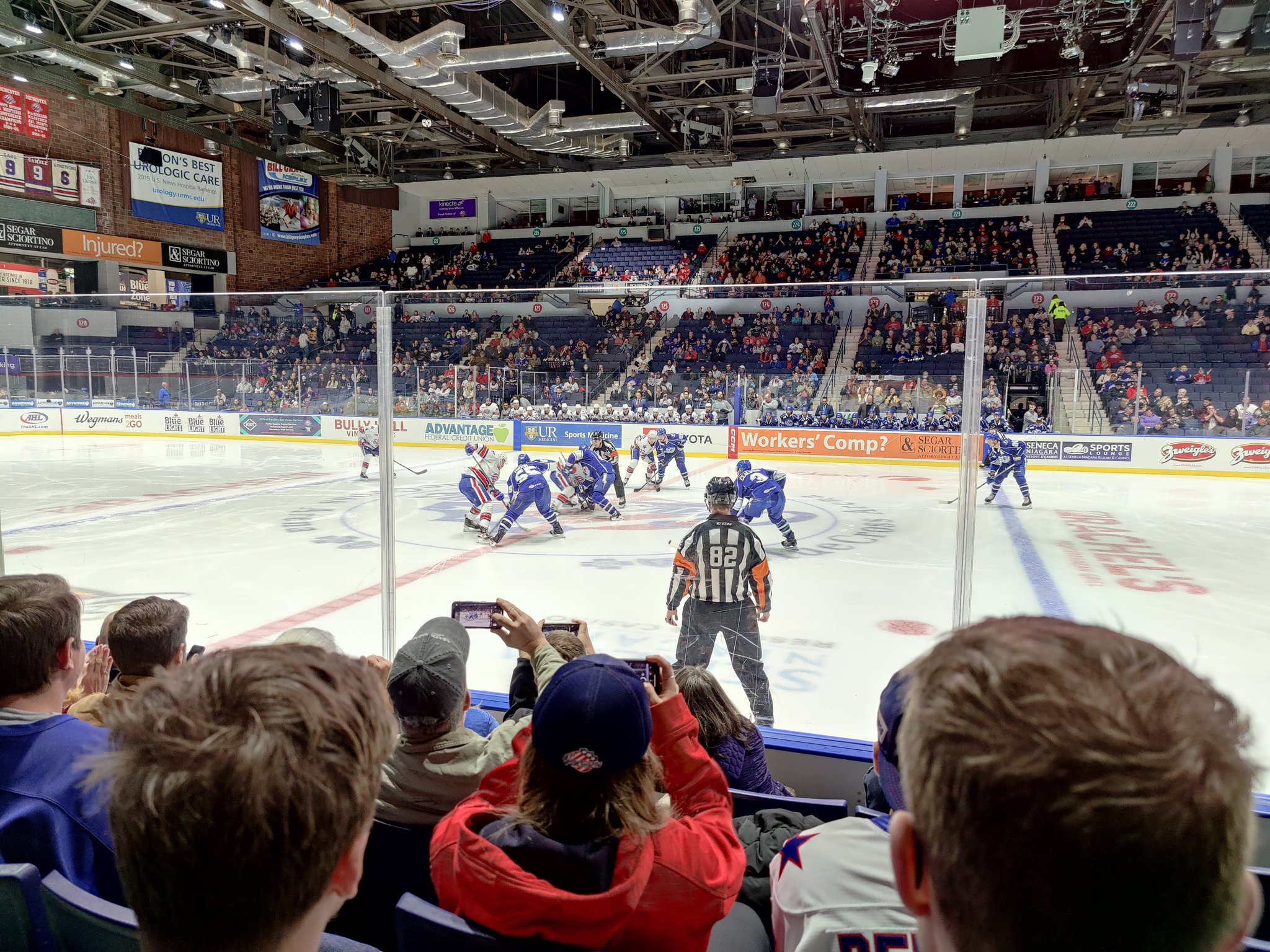 Rookie forwards Jack Quinn and J.J. Peterka each scored once and added two assists to lift the Rochester Americans (1-1-0-0) to a 5-3 victory over the intrastate rival Syracuse Crunch (1-1-1-0) in the team’s 2021-22 Home Opener Friday at The Blue Cross Arena.

With the win, Rochester has collected at least one point in 22 of the last 34 games against Syracuse dating back to the start of the 2018-19 campaign, going 18-12-3-1. Additionally, tonight’s contest was the seventh time the Crunch have served as Rochester’s home-opening opponent, including three times in the last five years. The Amerks improved to 6-1-0-0 all-time in home-opening matchups against Syracuse.

While both Quinn and Peterka each tallied their first multi-point efforts of the campaign, Sean Malone and defensemen Ethan Prow and Josh Teves all rounded out the scoring for Rochester. Prow and Teves’ markers were their first points as Amerks while Linus Weissbach picked up his first pro point with an assist on Rochester’s first goal of the game.

Goaltender Ukko-Pekka Luukkonen earned his second start in the net and he made 21 saves to even his record on the season to 1-1-0 while also picking up an assist.

First-year forwards Simon Ryfors and Jaydon Dureau both scored their first AHL goals while Antoine Morand added his first tally of the season for Syracuse, who now are 1-1-1-0 on the season. Netminder Hugo Alnefelt made his third appearance of the campaign, and despite stopping 17 of the 21 shots he faced, he suffered the loss.

After the Crunch opened the scoring 4:47 into the first stanza, the Amerks responded with four consecutive goals to grab a 4-1 lead at the 13:55 mark of the third period.

On the first Amerks goal from Prow, Jankowski was handed a pass from Weissbach as he tucked down the half wall. Before the former first-round pick reached the hashmarks, he left the puck for Prow. The defenseman sprinted towards the net before sending a backhanded shot past the right leg of Hugo to even the score at one with 4:25 left in the first period.

Following the intermission, the Amerks gained their first lead of the night thanks to Teves’ first marker of the season less than four minutes into the second period. After the Crunch cleared the puck on Luukkonen, he steered it to Teves. The defenseman then carried the puck up the ice and banked it off the end boards before racing to the reclaim it. Teves beat his fellow blueliners and slipped it behind Hugo.

The lone assist was credited to Luukkonen, marking his first career AHL point.

Later in the stanza, the Amerks doubled their lead to make it a 3-1 score as Quinn teamed up with Peterka at the 13:47 mark. Peterka picked up a loose puck in the trapezoid behind the Crunch zone and patiently waited before he backhanded a pass to Quinn near the left face-off circle.

Rochester upped its lead to a three-goal cushion as Malone neatly tucked a shot in the upper corner with 6:05 left in the final frame. Malone’s goal came thanks to a perfect pass from Peterka and Quinn.

Quinn now shows goals in back-to-back games to begin the 2021-22 season and seven points (2+5) over his last five games dating back to last season.

Just 58 seconds following Malone’s first goal of the season, Morand netted a shorthanded goal before Peterka was awarded his first professional marker as he was slashed while skating in alone on a breakaway towards an empty net while Hugo was pulled for an extra skater.

The Crunch added their final goal of the night with 30 seconds left in regulation but it was too little too late as Rochester picked up its first win of the season by the score of 5-3.

For the first time since the 2019-20 season, the Amerks head north of the border as they begin a four-game Canadian road swing starting with a 4:00 p.m. matinee at Coca-Cola Coliseum on Saturday, Oct. 23 against the Toronto Marlies. The matchup will be the first contest between the two clubs since Feb. 8, 2020 and will be carried live on The Sports Leader 95.7 FM/950 AM ESPN Rochester as well as AHLTV.